Brazil Fight has quickly become the premier MMA event in the state of Minas Gerais. Saturday night, at the Chevrolet Hall in Belo Horizonte, the in-state fighters triumphed 4-1 over their Sao Paulo foes in a five-fight interstate series.

In the most shocking outcome of the Minas Gerais vs. Sao Paulo series -- and the only loss for the Mineiro side -- touted lightweight prospect Thiago Michel Pereira Silva lasted just 70 seconds against unheralded Alessandro Zoio.

Silva, who has been dubbed “The Anderson Silva of Belo Horizonte” for his prodigious striking, slipped while going for his first kick of the fight. Zoio followed him to ground, quickly getting his back. Zoio slowly put his hooks in, got the body triangle and finally submitted Silva with a rear-naked choke at just 1:10 in the first round.

“He might be the best 155-pound fighter in Brazil, but he slipped and I was able to finish him,” an elated Zoio said following the fight. 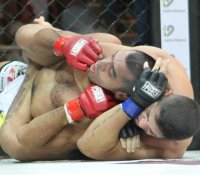 
In the most controversial bout of the evening, local Joaquim "Mamute" Ferreira took an unpopular split decision over Edson "Conterraneo" Franca in a heavyweight contest.

After a competitive first round where “Mamute” -- the only man to ever defeat UFC title contender Junior dos Santos -- showed his grappling and “Conterraneo” showed his striking, the pair exhaustedly grappled for the following 10 minutes. Ferreira held top control in the second round, and Franca -- who daylights as a bricklayer -- forced Ferreira to turtle for the entire third round, bloodying his face with punches.

After the split decision in Ferreira’s favor was announced, Franca’s coach Miguel Repanas began arguing with crowd members, yelling that his fighter was robbed.

“He is a warrior and you are correct to support him,” Franca said, taking the house microphone and addressing the partisan crown. “The sport needs this.”

In lightweight action, Cesar "Gordim" Augusto earned a first-round stoppage over Udi Lima. “Gordim” was stuck in a deep armbar and looked to be on the verge of defeat. However, the hometown fighter was able to slam his way out of it and pounce on a disoriented Lima with punches to get the stoppage at 3:22 of the first round.

At 205 pounds, Cristiano "Titi" Lazzarini forced Walter Luis da Silva to quit in the second round. After spending almost the entire first round mounted on da Silva, “Titi” got another takedown in the second stanza. As soon as the fighters touched the ground, da Silva signaled to referee Marlon Sandro that he wanted out, giving Lazzarini the win at 4:05 in round two. 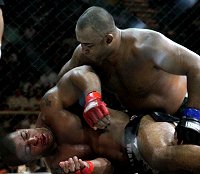 M. Alonso
Edson Franca bloodied "Mamute,"
but couldn't get the decision win.
Marcio Nunes came out throwing haymakers against Gustavo Franca. However, “Coelho” kept his composure, got a takedown, took Nunes’ back, and finished the fight with a rear-naked choke at 3:24 of the first round.

At Brazil Fight 2 in August, Igor “Chatubinha” Fernandes needed only 96 seconds to tap out Marcelo "Uirapuru" Azevedo with his trademark anaconda choke. In Saturday night’s finale, he needed just 18 seconds to knock him out.

Just seconds into the fight, Fernandes hit Azevedo with a humongous overhand right to the jaw, which put “Uirapuru” flat on the mat, clearly unconscious. Without breaking stride, Fernandes finished the job, dropping hammerfists on the unconscious Azevedo until referee Felipe Lima could intervene.

After the fight, a very emotional “Chatubinha” -- a popular fighting exponent of Rio’s favelas -- made a personal and political plea.

“I just want ask for peace in my community, Vila Cruzeiro,” said the teary-eyed fighter, calling for an end to the violence in one of the main battlegrounds of Rio de Janeiro’s ongoing outbreak of violence. 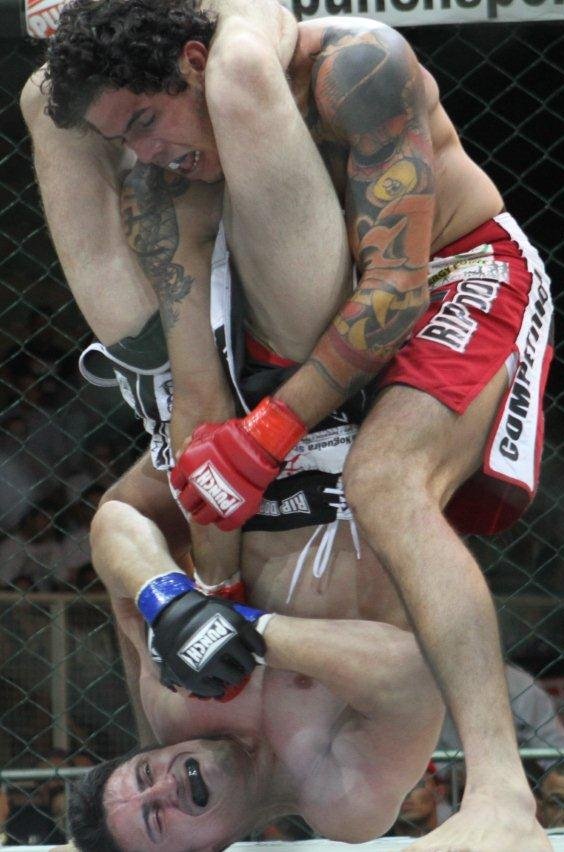 M. Alonso
Cesar "Gordim" survived a nasty
armbar from Udi Lima.
In a clash of 205-pound prospects, Natal native Ronny Markes halted Fernando Silva with strikes at 3:08 of the first round.

“Lageano” came out striking against his northeastern foe, but Markes surprised him by ending every exchange with a successful takedown. After Silva was able to get back up for a third time, Markes clipped him with a thunderous overhand right. Markes seized the opportunity and pounced on Lageano, finishing him with punches.

The win gets the 22-year-old Markes back in the win column, following his surprising first career loss on Oct. 7 to Paulo Rodrigues at Iron Man Championship 7.

Two-time Rio Heroes champion William Vianna won a razor-thin split decision over notorious local Mauricio Antonio "Faccao" Santos Jr., avenging his loss from Brazil Fight’s first edition this past March. The bout was mostly a bad display of poor striking, in which both fighters spent the contest hitting air. However, after 15 minutes, Vianna had landed the majority of hard blows, especially unchecked low kicks, and earned the split nod.

In Brazil Fight’s first-ever female fight, virtual unknown Juliana Carneiro earned split decision over Aline Serio in a lackluster affair. The two women spent the majority of the fight against the fence, with Serio stuffing Carneiro’s takedowns. However, Carneiro was able to land just enough offense with punches and knees to eke out the close decision.