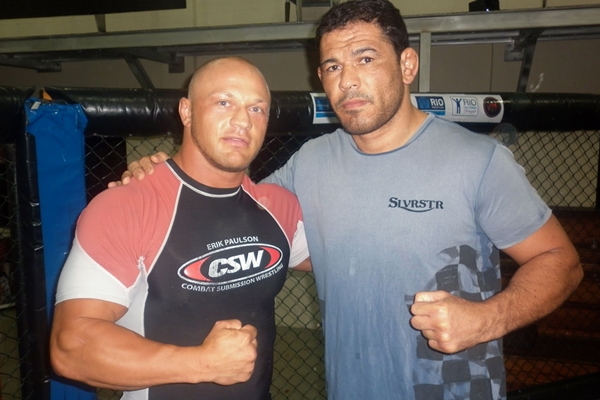 
Antonio Rodrigo Nogueira is putting in hard work with some big names in preparation for his homecoming at UFC 134.

The 35-year-old “Minotauro,” who will fight in his native Brazil for the first time when he meets Brendan Schaub in Rio de Janeiro on Aug. 27, has been working alongside regular training partners Anderson Silva, Rafael “Feijao” Cavalcante and Ronaldo “Jacare” Souza. He has added huge heavyweights like Junior dos Santos, Antonio “Bigfoot” Silva, Pedro Rizzo and Mario Sperry to the rotation at his Nogueira Training Center in Rio.


Advertisement
But Nogueira was still missing one thing: a wrestling specialist.

“Rodrigo asked me to bring him a good wrestler,” Cunha explained to Sherdog.com. “We talked about the perfect profile, not only to help him technically, but also a big guy with good teaching skills. Then, I invited Josh, who’s a really cool and competent guy. The team liked his training, his discipline. This guy is 30 years old and has trained wrestling for 25 years. He’s used to the sport, a real athlete who doesn’t drink alcohol, smoke or party. He’ll stay in Rio until September to also help Bigfoot prepare for Strikeforce.”

After his first training session with the wrestler, “Big Nog” came away with a positive impression.

“He has good technique and is also a good teacher,” Nogueira told Sherdog.com. “He’s one of the bigger heavyweights to help us with wrestling. We’re training takedowns and a lot of other positions, so he’ll be a great combination for us. Janousek is a tough guy with good BJJ, too, which is good for us. Training with him will help us a lot to develop our takedown attempts and defenses. We expect a lot from his stay in Rio.”
Related Articles
Latest News
+ VIEW MORE