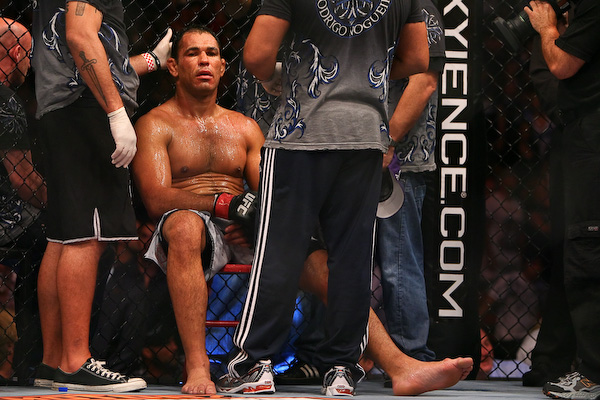 No one could take damage quite like Antonio Rodrigo Nogueira. | Photo: Daniel Herbertson/Sherdog.com


Revered for his amazing capacity to recover from serious damage, Antonio Rodrigo Nogueira spent the final years of his career trying to avoid the subject with the media.

Few could deny that Nogueira’s passion for the sport dwarfed all the injuries he suffered, and he resisted for years repeated calls for him to retire. Until Ultimate Fighting Championship President Dana White nudged him into retirement following a loss to Stefan Struve at UFC 190 on Aug. 1, “Minotauro” had managed to avoid questions regarding the end of his career and the subject of exactly how many surgeries he has undergone. Not anymore. During a roundtable discussion promoted by Dr. Marcio Tannure at the 2015 Rio Sports & Health conference in Rio de Janeiro on Oct. 18, Nogueira talked openly about his injury history.

“I have done a total of 22 surgeries; I’m all broken,” Nogueira said with a laugh. “I started my surgery career early, at 11 years old when I was hit by the truck. However, the last five years were more difficult. I had eight surgeries. I have 16 metal screws in my right arm, from the elbow to the shoulder, and they are extremely painful at the beginning of a training camp and also when the temperature changes. I also had a surgery on my left arm and two on my hips. Those four surgeries were pivotal in my decision to retire.”

Tannure interrupted “Minotauro” during the discussion to reveal that the former Pride Fighting Championships titleholder had fought Roy Nelson in April 2014 with a torn knee ligament. Nelson knocked out Nogueira in the first round.

“When I arrived in Abu Dhabi for fight week, ‘Minotauro’ came to me and said, ‘Doctor, I was sparring yesterday when I heard a snap. I think something happened,’” Tannure said. “This was three days before the fight, and he entered the Octagon barely able to walk. I told him that few human beings would be able to fight with such strong pain. This guy is definitely a cyborg.”