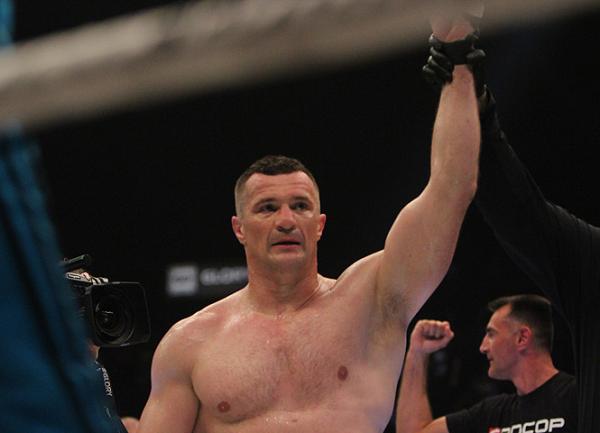 The 39-year-old “Cro Cop” claimed the IGF championship from Japan’s top heavyweight by way of second-round doctor stoppage in the main event of Inoki Genome Fight 2 on Saturday at Ryogoku Kokugikan hall in Tokyo.

Ishii sought to avoid the Croatian southpaw’s strikes early on and eventually used a caught leg kick to bring Filipovic to the ground. Once there, Cro Cop absorbed a few heavy left hands but mostly canceled out Ishii’s offense with effective wrist control. A slicing elbow from underneath opened a bloody cut in the center of Ishii’s hairline, prompting referee Ryogaku Wada to twice pause the action so Ishii could be inspected by the ringside physician.

Perhaps sensing an imminent stoppage, Ishii attempted to mount some standup offense at the start of the second frame. The champion’s cut worsened as the round wore on, a stream of blood flowing down the center of his face, and after two more visits to the doctor, referee Wada deemed Ishii unfit to continue. Filipovic, who had gone 1-4 in his previous five MMA outings, took the title via TKO at 2:37 of round two, while Ishii stormed out of the ring before the official result was read.

Youth got the better of experience in the evening’s co-main event, as 100-plus fight vet Ikuhisa Minowa fell to Shinichi Suzukawa, a sumo turned pro-wrestler who entered the fight with an 0-2 record.

Suzukawa spent a tepid opening round chasing after the backpedaling “Minowaman,” though neither fighter looked to be in a rush to engage. Minowa’s only real scoring attacks in the fight -- a series of low kicks -- also proved to be his undoing. After laying a shin across Suzukawa’s left thigh in the early moments of round two, Minowa came away limping, having injured his right leg, and then fell to the ground. Minowa’s corner threw in the towel at the 59-second mark, leaving Suzukawa to celebrate while Minowa was placed on a backboard and carried from the ring.

In a clash of American heavyweights, “Huggy Bear” Chris Barnett used all the power in his 5-foot-9, 340-pound frame to stage a comeback against 6-foot-3 Travis Wiuff. The first round was controlled by Wiuff with takedowns and clinches, but “Diesel” rushed into the pocket in round two and paid for his carelessness. Barnett staggered the larger man with a right hand on the ear, then sprawled on a shot and bashed Wiuff with hammer fists to force a stoppage after 57 seconds.

Lightweights Ramazan Esenbaev and Yuki Yamamoto kicked off the main card with a fight that dragged for two rounds and then ended suddenly in the third. Russia’s Esenbaev, who outworked the relatively inactive Yamamoto over the first 10 minutes, scored a knockdown with an overhand right at the onset of round three. Despite firing back and stinging Esenbaev with a right hand of his own, Yamamoto was too badly hurt and fell to the canvas as he turned to escape. Esenbaev wasted no time in pouncing and locking up a no-hooks rear-naked choke which secured the tap 58 seconds in.