Dubbed “Mr. Pride,” Shoji's fight style was markedly different from his heyday in the Japanese super promotion, reminiscent of the hourglass karate stance that Hiroyuki Abe employed in his latest outings in Shoot Boxing and Deep.

“It was a new style of karate that Tatsuya Iwasaki taught to me,” claimed Shoji after the fight, who was wearing the black belt awarded to him by Iwasaki during his retirement ceremony. 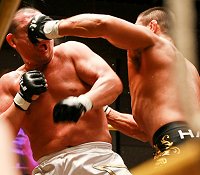 T. Irei
Misaki crushed Shoji's karate stylings.
Iwasaki is best known to Pride fans as Wanderlei Silva's prey for the first K-1 and Pride “Dynamite” collaboration in 2002 -- an event that still holds the record for the most attended show in MMA with 91,000 at the National Olympic Stadium in Tokyo.

Iwasaki's style of karate proved no more effective for Shoji than it did for Abe, however, as a cautious Misaki spent round one at distance, landing repeated low kicks and the occasional stiff jab. Shoji landed several hard counter left hands, though they were less consequential than Misaki's constant offense.

“Before the fight, I wanted to crush Shoji, but once I stepped into the ring, it was hard for me to bring myself to hurt a retiring fighter like him,” said an emotional, teary-eyed Misaki post-fight. “He didn't want to engage, either, so that made it even harder for me to hurt him.”

Regardless, Misaki surmounted his reservations and unleashed a violent flurry of punches and a knee that sent Shoji to the mat a minute into the second period. Though Shoji covered up, he offered little resistance, as “The Last Samurai” piled on punches and stomps, prompting referee Yoshinori Umeki to peel a crying Misaki off at 1:13.

It was Misaki's second victory over Shoji, having choked him out at Deep "23 Impact" in February 2006. Shoji briefly contested the stoppage but was overcome by tears himself shortly after.

“I love Akira Shoji,” proclaimed the emotional Misaki in-ring. “I've admired him since the start of my career, and have been inspired by him to fight the way I do today. He's a samurai. I want to thank him for encouraging and moving me.” 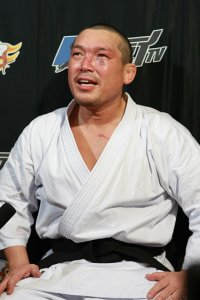 T. Irei
Shoji showed off his new
black belt.
“After the Tohoku earthquake, I thought, 'Can I really fight given the circumstances?'” said Shoji. “But all I have in my life are the martial arts. I want to continue contributing to martial arts and to found the 'MMA Old Boys Club' to help MMA contribute to the world.”

The bout concluded with a retirement ceremony in which various luminaries such as Caol Uno, Hayato Sakurai, Dream Event Producer Keiichi Sasahara and veteran referee Yuji Shimada, among many others, presented the retiring Shoji with flowers and gifts. The ceremony closed with a final playing of the Pride theme song for “Mr. Pride.”

With this second loss to Misaki, Shoji concludes his lengthy career in MMA, which featured a staggering 23 bouts in the Pride ring. However, he is not leaving the sport entirely. Shoji continues to work as a referee and judge for Deep and Dream, and now, he will direct his energies toward creating the aforementioned “MMA Old Boys Club.” According to Shoji, the club is intended to be a group for fighters to “give back to society,” though he was unable to give concrete details on its planned activities.

Nakao did his homework, as he consistently foiled Kitaoka's go-to favorites of single-leg takedowns and leg submissions. Nakao's defense for the Achilles’ lock was simple: as Kitaoka arched back for the full extension, Nakao broke the former SRC champ's grip, keeping his foot safe.

“I rushed into the submission attempts and, why, I just wasn't able to get them,” a frustrated Kitaoka said after the fight. “I'm not very satisfied with the outcome, but I really did try to finish it.”

Though Nakao's defense was otherwise superb, it was still a tactic that in the judges' eyes would not win the fight. Kitaoka took the unanimous decision thanks to his constant takedown and submission attempts. No scores were announced. 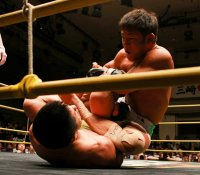 
Fellow SRC veteran Eiji Mitsuoka looked to be in trouble early against Jung Gyeong Lee, when, after a single-leg attempt, Mitsuoka found himself caught in a triangle choke. Mitsuoka kept his cool, however, and, over the course of two tense minutes, worked his way free to pass to full mount. From above, Mitsuoka mercilessly rained heavy punches until Lee tapped to escape further punishment.

Afterward, Mistuoka made a special address to his wrestling senior, who lost his Ishinomaki home in the recent March 11 Tohoku disasters. Calling him out in the crowd, Mitsuoka stated post-fight: “I fought tonight to cheer for my sempai [senior] and the Tohoku Earthquake survivors.”

A collaboration between heavy metal band Outrage and Deep, the first bout of the Annihilate Megaton Cup saw Seigo Mizuguchi crush Mamoru Nakamura in less than a minute, putting him one step closer to becoming the Megaton division’s number one contender.

After launching three consecutive left hooks to Nakamura's cheek, Mizuguchi flipped him over his hip and wailed away from mount. Kicking his legs helplessly from bottom, Samio Kimura was forced to step in and save the beached Nakamura at the 0:52 mark. 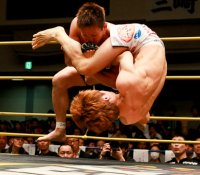 After stunning Harada in the first, Wada took him down and stifled him on the canvas in the second frame to lock up the decision.

Lightweight Luiz Andrade I reversed an early Yutaka Ueda takedown in the second round to latch on a tight armbar that referee Umeki deemed to taut for his liking, calling the bout a mere 52 seconds in.

Kicking off the evening, Sakae Kasuya woke up the beast in bantamweight Makoto Kamaya, who choked him out cold at 1:46 of round two.