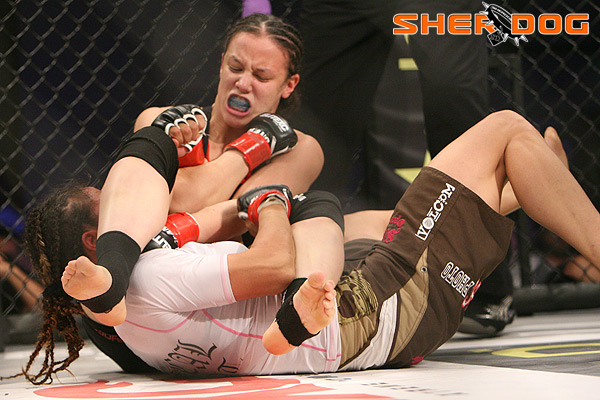 When most active fighters are forced into an involuntary layoff of any kind of length, they don’t stray too far from the sport that they love.

In one sense, Shayna Baszler is a lot like her peers. Since learning that her April 21 bout with Kelly Kobold -- along with the rest of the Cage Fighting Xtreme “Spring Brawl” event in Fargo, N.D. -- was canceled, the “Queen of Spades” has remained in the gym, hoping that a slot on the April 28 all-female Invicta Fighting Championships card opens up.

“I think the hardest part about something like that is to keep training on the off chance you might have a fight,” Baszler recently told Sherdog.com. “That’s the most frustrating part -- training hard and busting your tail, and going to the gym when you just don’t feel like it during down time. It’s hard to convince yourself that you might have a fight and you have to get in there.”

Time away from the cage is nothing new to Baszler, who hasn’t competed since defeating Elaina Maxwell on Nov. 19, 2010, in Hankinson, N.D. A potential rematch with Alexis Davis this past July fell through when Davis signed with Strikeforce.

But Baszler hasn’t gravitated toward the usual ventures that attract many of her MMA counterparts during their down time. Along with what she calls “the usual metal and video gaming, guitar-playing stuff,” Baszler has found an off-the-beaten-path kind of niche as the strength and conditioning coach for a local roller derby team in her hometown of Sioux Falls, S.D.

Of course, the former Strikeforce and EliteXC competitor didn’t feel comfortable assuming a coaching role without stepping into the roller derby arena herself. She came away with a newfound respect for the sport.

“I have practiced with them,” Baszler said. “I felt like I shouldn’t have any authority to tell them what things are gonna help them and why unless I’ve done it. So, I have done that. Those girls are nuts -- they get injured way more than I do in a fight sport. If I didn’t have a fight career I would probably be playing some derby.”

That will have to wait, for now. Thanks to the recent emergence of Ronda Rousey and her much-hyped Strikeforce title bout with Miesha Tate in March, interest in women’s MMA -- particularly the 135-pound division -- appears to be at an all-time high. Having fought the likes of Cristiane “Cyborg” Santos, Sarah Kaufman, Alexis Davis, Tara LaRosa and Julie Kedzie during her career, Baszler has plenty of experience navigating the deep waters of the female ranks.

Like many of her peers, she has watched Rousey’s ascent with a keen interest.

“Even though her fight with Miesha was a really great fight, I still think we haven’t seen what she’s like in a fight yet. What I mean by that is: When she’s tired and it’s round three, what does she fight like when the pace has slowed down?” Baszler said. “As far as Ronda Rousey the character, I love all the hubub. There’s a lot of people that hate that stuff about MMA, but I’m of the opinion that fighting is an entertainment sport, and people are far more concerned with the story of a fight than the actual fight itself.

“Did she say things that pissed me off? Yes. Do I think she’s cocky and needs to be smacked around? Yeah, but I love that stuff,” she continued. “I love that she’s a heel. I love that whole part of fighting; I’m down with it. It brings a lot of attention. It’s only good for me, whether people hate her or love her.”

Looming on the horizon for Rousey is a potential showdown with Santos, once the former 145-pound champ returns from her year-long suspension for testing positive for the anabolic steroid stanozolol. Baszler, who lost to Santos via second-round TKO in 2008, believes it would be an intriguing matchup.

“They both have the skill set to defeat each other. It’s gonna depend on who makes the game theirs,” she said. “Cyborg has a tendency to start off like a bat out of hell. If you come out aggressive like that with Ronda Rousey, you’re gonna crash into her, and that’s gonna be her game. The ground would be another issue. I think the problem Cyborg has with the ground is she makes really big critical errors. When she fought Gina (Carano) she tried to pull guard but would pull her into mount. Cyborg’s experienced enough and it would be interesting to see how Ronda would handle that type of aggression.”

Meanwhile, the Josh Barnett protégé says she has some tricks in store for her own return to the cage. Known for her patented “Shwing” kimura variation, as well for having executed the “twister” submission twice before Chan Sung Jung brought it into the mainstream, Baszler hopes to translate a few pro-wrestling maneuvers to MMA.

“I have a couple that I’ve been hitting in the gym pretty successfully, but I don’t have names for them yet. I’ll go on YouTube and watch pro wrestling submissions,” she said. “I like to take a fantastical submission and see what different tiny thing I have to do to get it to work for real.”