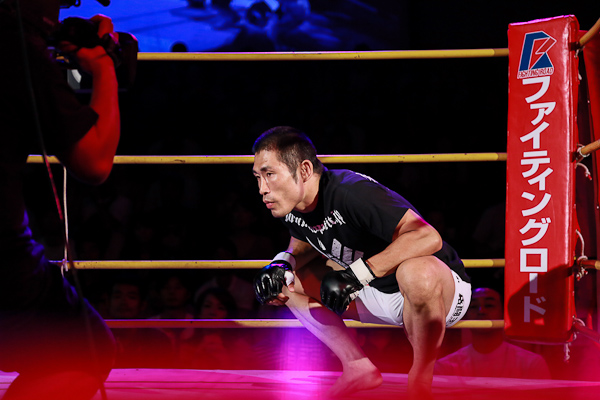 
Yoshiro Maeda had his 50th professional MMA bout Sunday night, but it was an occasion the veteran will be anxious to forget.

After a brief feeling-out process, Motoya exploded on Maeda with an onslaught of punches. Despite being backed up against the ropes, the former Deep bantamweight champ returned fire, but it was Motoya who got the better of the exchanges as blood began to pour from Maeda’s nose.

Maeda succeeded in dragging Motoya to the ground and moving from side control into mount, but it proved no more than a momentary respite, as the younger man was able to instantly reverse the position and take Maeda’s back. Rather than working immediately for the rear-naked choke, Motoya elected to soften up his opponent with punches. Maeda was forced to cover up before eventually working his way to his feet and shaking Motoya off.

With both fighters back on their feet, the referee paused the contest while the ringside doctor took a long look at the damage to Maeda’s nose. Maeda was allowed to continue and immediately at two hard left hooks before being dragged to the ground, where Motoya began raining down punches from back mount. Maeda swept to top position, only to find himself in a tight triangle choke. With his head trapped, Maeda was powerless to prevent Motoya from landing elbows and then transitioning to an armbar which forced the tap with just one second remaining in the round. With the loss, Maeda, who is winless in his last five outings, drops to 35-15-5. Motoya moves up to 11-4 and earns a rematch with Deep 125-pound champion Tatsumitsu Wada, to whom Motoya dropped a split decision last August.

In the co-main event, Masakazu Imanari’s desperation to get the fight to the ground proved to be his undoing in a flyweight matchup with Haruo Ochi. The 38-year-old submission specialist collapsed dramatically to the ground almost every time Ochi threw a punch, hoping to lure the less experienced fighter into making a mistake. The game plan backfired, as Ochi was able to rough up Imanari with ground-and-pound, leading to severe swelling on one of Imanari’s eyes. The ringside doctor stopped the bout 51 seconds into round two, giving Ochi the TKO victory.

Earlier in the evening, Keita Nakamura returned to welterweight after a brief spell competing at 155 pounds and made short work of 41-year-old Keiichiro Yamamiya. “K-Taro” took down the Pancrase stalwart and moved from back control to full mount, where he unloaded with punches to force a stoppage at 4:51 of round one.

The majority of the evening’s fights went the distance, with two-round unanimous decision wins for Shigetoshi Iwase (over Juri Ohara), Masamichi Ueta (over Tomoharu Toda) and Takahiro Kato (over Kanho Ryu).

On a night where the judges frequently failed to come to a consensus, Luiz Andrade I beat Takuya Oyama by majority decision, Yuki Takano prevailed against Hiroto Sakuma by majority decision, and Seita Katsuki and Yusaku Fujisawa fought to a split draw. Hideki Kiyota submitted Tatsuyuki Nakamura with a rear-naked choke at 3:35 of round two.