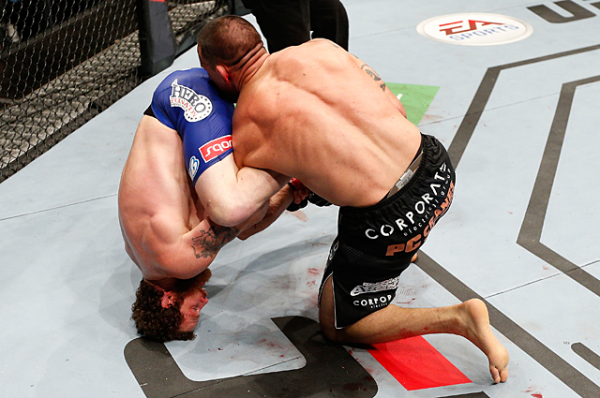 
Nate Marquardt could not have scripted it any better.

The former King of Pancrase made a triumphant return to the Ultimate Fighting Championship’s middleweight division, as he submitted James Te Huna with a first-round armbar in the UFC Fight Night “Te Huna vs. Marquardt” headliner on Saturday at Vector Arena in Auckland, New Zealand. Te Huna (16-8, 5-4 UFC) tapped out 4:34 into round one.

Marquardt (33-13-2, 11-6 UFC) roared out of the gate and never looked back. The 35-year-old Brazilian jiu-jitsu black belt blasted Te Huna with a knee inside the first 30 seconds, secured a takedown and tore into him with elbows from top position, drawing first blood. After the two middleweights returned to a standing position, Te Huna uncorked a series of thudding uppercuts. Marquardt withstood the onslaught and delivered another takedown before moving to full mount. During Te Huna’s subsequent backdoor escape, Marquardt locked down the armbar for the finish.

“This is where I belong,” said Marquardt, having halted the first three-fight losing streak of his career. “I made some bad choices moving to 170 [pounds], but that’s over now.”

Outside of a burst of ground-and-pound of his own late in round one, Palelei (21-4, 3-2 UFC) was never a factor in the fight. Rosholt assumed dominant positions on the ground in all three rounds, shutting down the 36-year-old Australian with power and technique. By the time the third round arrived, Palelei had nothing left in the tank with which to resist, bringing an end to his streak of 11 straight wins.

Rosholt has now won seven straight, five of them by decision.


Macaco Gold Team’s Charles Oliveira submitted former Shooto and Sengoku champion Hatsu Hioki with a second-round anaconda-grip Peruvian necktie in a featured duel at 145 pounds. Hioki (27-8-2, 3-4 UFC) yielded 4:32 into round two, as he submitted for the first time in his 37-fight career.

Oliveira (18-4, 6-4 UFC) set the trap, and the Japanese veteran wandered into it. Hioki struck for a takedown and moved to full mount with a little more than a minute left in the second round. After Oliveira surrendered his back, the 30-year-old went to work on a rear-naked choke. “Do Bronx” turned the tables, escaped Hioki’s clutches and snatched the choke in the transition.

Once regarded as the No. 2 featherweight in the world, Hioki has lost four times in his last five outings.


An active and efficient standup attack spurred “The Ultimate Fighter: The Smashes” winner Robert Whittaker to a unanimous decision over Roufusport’s Mike Rhodes in a welterweight showcase. Whittaker (12-4, 3-2 UFC) swept the scorecards with identical 30-27 marks, halting his two-fight losing streak.

Rhodes (6-3, 0-2 UFC) always seemed to be a step behind the Australia-based Kiwi. Whittaker, 23, pecked away with punches and kicks over the first 10 minutes, then sealed it in the third round. There, he grounded Rhodes with a well-disguised takedown and bloodied the Duke Roufus understudy’s nose with ground-and-pound. 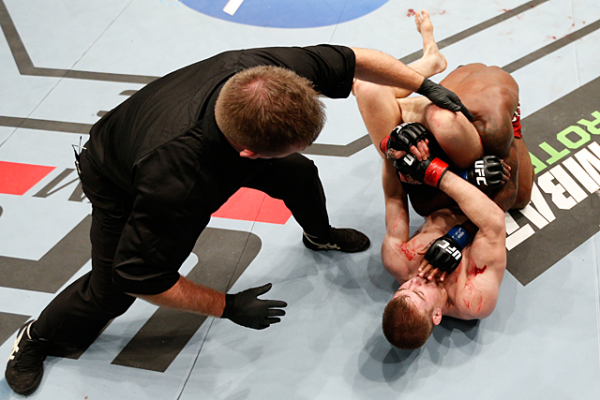 The youngest fighter on the UFC roster, Matthews (6-0, 1-0 UFC) dominated from start to finish. The 19-year-old opened a cut on Johnson’s forehead with a volley of savage elbows in the first round, utilized a suffocating clinch game in the second and turned up the heat in the third.

There, Matthews moved to full mount and forced the Californian to yield his back. Johnson scrambled into top position, where he was met with the fight-ending triangle choke.


Takedowns, superiority in the scrambles and a near-finish carried “The Ultimate Fighter: The Smashes” semifinalist Richie Vaculik to a unanimous decision over Filipino newcomer Roldan Sangcha'an in an undercard duel at 125 pounds. All three cageside judges scored it for Vaculik (10-2, 1-1 UFC): 30-27, 29-28 and 29-28.

Sangcha’an (4-1, 0-1 UFC), who filled in for the injured Jon delos Reyes, had his moments. He did his best work in round three, where he managed to stay upright and cracked Vaculik with kicks to the legs, body and head. However, it was not enough erase the Aussie’s advantage. Vaculik nearly cinched a fight-ending rear-naked choke in the first round and neutralized the Lakay MMA representative with takedowns and ground-and-pound in the second.

Vaculik, 31, has recorded six wins in his last seven appearances.


Vik Grujic dispatched fellow “The Ultimate Fighter Nations” graduate Chris Indich with a nasty right hand and follow-up punches in the first round of their preliminary welterweight encounter. Indich (5-3, 0-2 UFC) met his end 4:55 into round one.

Grujic (7-3, 1-1 UFC) made his move late in the frame, as he answered a takedown from Indich with one of his own. The 37-year-old advanced briefly to full mount and eventually transitioned to the back. Indich denied his advances and returned to his feet, but he left himself exposed in doing so. Grujic swarmed with punches, and a right hand penetrated the Indich guard and folded him where he stood. The onetime Integrated Combat Championship titleholder turtled against the cage, leaving the referee no choice but to intervene.

Magny (11-3, 4-2 UFC) made a tactical error inside the first minute, allowing the Brazilian to scramble to his back. De Lima eventually executed a takedown and achieved full mount twice before threatening the American with a triangle choke. Magny hoisted his counterpart out of desperation and slammed him to the canvas, but the maneuver allowed de Lima to tighten his grip. The horn sounded soon after, perhaps saving Magny from the submission.

In the second round, the tide turned. Magny used his eight-inch height and six-inch reach advantage, as he fired away with jabs and crosses. A final surge capped by a wicked straight right leveled de Lima and resulted in the stoppage. A Miguel Torres disciple, Magny, 26, has won three fights in a row.

Hooker (11-4, 1-0 UFC) countered a takedown into top position, only to find himself defending against an attempted heel hook from the Thailand-based Brit. He settled in a seated position, targeted Entwistle’s head with elbows and unleashed. Hooker slowly increased the intensity and frequency of the elbows, opening multiple cuts on Entwistle’s scalp and setting the stage for the finish.

The 24-year-old Hooker has rattled off six consecutive victories.


Bellmore Kickboxing Academy export Gian Villante utilized effective counter striking and repeated head kicks, as he eked out a split decision over Sean O'Connell in an undercard scrap at 205 pounds. All three cageside judges scored it 29-28, two of them siding with Villante (12-5, 2-2 UFC).

O’Connell (15-6, 0-2 UFC), a replacement for the injured Anthony Perosh, was the aggressor for much of the match, as he stuck the favored Strikeforce veteran with power punching combinations and sucked him into a series of clinches. The 30-year-old Jeremy Horn protégé floored Villante with a left hook in the second round and pursued him for a potential finish. It did not materialize.

Villante found another gear in round three, where he peppered O’Connell with counter punches, opened a cut over his right eye and scored with kicks to the body and head.