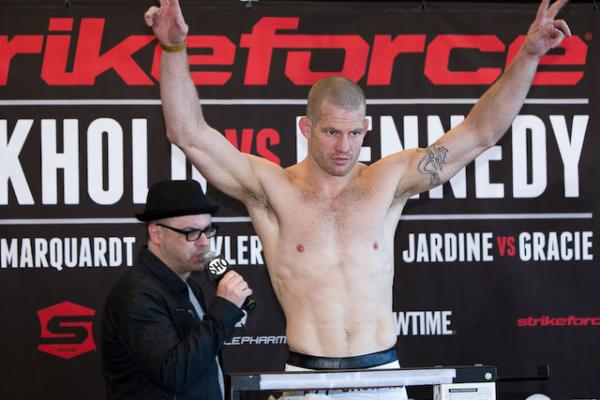 Former UFC middleweight title contender Nate Marquardt made his return to competition Saturday night at the Rose Garden in Portland, Ore. Marquardt captured the vacant Strikeforce welterweight championship by knocking out Tyron Woodley in the fourth round of their co-headlining attraction at Strikeforce “Rockhold vs. Kennedy.”

The opening minutes of the bout proved inauspicious for Marquardt, who was stunned by a looping right hand behind the ear. Though he appeared to be in trouble momentarily, the 44-fight veteran regained his composure quickly and went to work, returning fire and cracking former NCAA Division I All-American wrestler Woodley with a straight right hand that sent him to the canvas. Marquardt appeared even more confident in round two when he took the center of the cage and brought “T-Wood” to the floor near the end of the frame.

Despite the UFC veteran’s strong start, Woodley stormed back in the third round, launching a barrage of hooks that forced Marquardt into the chain-link. Woodley capitalized on the moment, rocking the Grudge Training Center fighter with a hard right hook and following him to the mat.

“I think I backed up a little bit and gave him the opportunity to come forward,” Marquardt told Showtime Sports after the bout. “I can’t remember [exactly what happened], but I ended up on bottom. He was throwing a lot of hard shots, but I was just weathering the storm, because I thought I could make him wear himself out a little bit.”

As he did in the first round, Marquardt managed to recover from Woodley’s strikes, holding on from his guard until referee Dave Hagen restarted the men on their feet. Marquardt used the standup to his advantage, backing up Woodley with elbows near the end of the round.

The bout’s fourth frame would prove to be its last, as the Coloradoan picked up where he left off in round three, clinching with Woodley against the fence and unloading with a beautiful pair of elbows that signaled the beginning of the end for his opponent. A split-second later, Woodley absorbed a vicious left hook-right uppercut combination that relieved him of his consciousness.

Known for his respected fight resume, Marquardt says that holding four times the pro experience of his opponent aided him in picking up the win on Saturday night.

“Definitely, experience is what did it,” said Marquardt. “I came [into the fight] in great shape. I trained very hard for this. Those young guys are always tough and come out to win. They don’t have any quit in them.”

Marquardt, who captured Strikeforce’s welterweight gold in his inaugural appearance at 170 pounds, will likely soon be presented with a new challenger hungry to wrest the title from around his waist. In the meantime, however, the vet says he plans to savor his first title win since becoming King of Pancrase for a third time in 2004.

“Right now, I’m just so happy that I want to be here right now,” he said. “I don’t want to think ahead and think about what I’m doing next.”