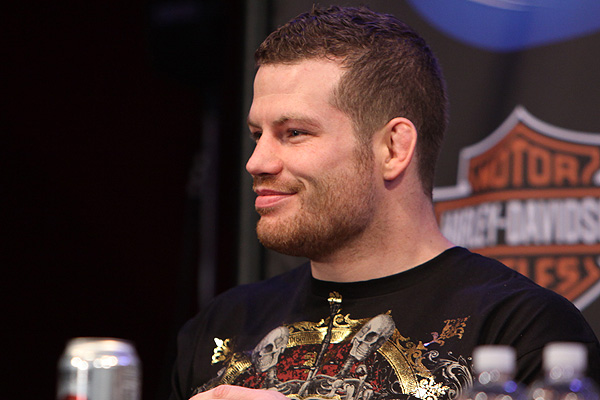 Only eight months after receiving his UFC walking papers, Nate Marquardt has become a member of the Strikeforce roster.

Marquardt’s signing with the Zuffa-owned promotion was announced on Tuesday’s episode of “UFC Tonight” on Fuel TV. The former middleweight King of Pancrase and UFC title challenger will likely compete in the Strikeforce welterweight division, though a debut date was not announced.

While a potential pairing with Tyron Woodley has been rumored, Marquardt’s manager, Lex McMahon, told Sherdog.com on Wednesday that nothing is set in stone.

“At this juncture, no opponent is finalized. We are working through the details with Strikeforce. However, Nate wants to fight the best in the division, and Tyron certainly qualifies,” McMahon said. “We will respect the Strikeforce process regarding announcements, but it is fair to expect that news will be forthcoming in relatively short order.”

Marquardt became one of the UFC’s top 185-pound competitors during nearly six years with the promotion, besting the likes of Jeremy Horn, Martin Kampmann, Demian Maia and Rousimar Palhares.

Marquardt last competed in March, notching a unanimous decision over Dan Miller at UFC 128. The 32-year-old was then supposed to make his welterweight debut in June, but he was removed from his headlining UFC Live 4 contest after a pre-fight medical revealed elevated levels of testosterone.

According to the fighter, he began testosterone replacement therapy (TRT) under orders from his doctor in August 2010 and continued with it through his March fight with Miller in New Jersey. After applying for a therapeutic use exemption with the New Jersey State Athletic Control Board, Marquardt was allowed to fight, but the commission ordered further investigation into the matter following the bout.

According to the fighter, the NJSACB required Marquardt to discontinue treatment for eight weeks and have his blood examined by an approved endocrinologist. While this came to pass and Marquardt was declared a legitimate candidate for TRT, the fighter later explained that resuming therapy just three weeks prior to his UFC on Live 4 appearance proved problematic.

Attempting to combat the symptoms of low testosterone, Marquardt’s doctor recommended he undergo a more aggressive treatment in order to compensate and return to normal levels by fight night. Instead, Marquardt’s testosterone levels on the day of the weigh-ins exceeded the allowable limit, and he was not allowed to fight by the Pennsylvania State Athletic Commission.

Marquardt was released soon after by UFC president Dana White, who declared that Marquardt would never again fight for the UFC.

The fighter was also suspended by the Nevada State Athletic Commission in 2005 after testing positive for Nandrolone, an anabolic steroid, in his Octagon debut against Ivan Salaverry at UFC Fight Night 1. Marquardt denied knowingly using the substance, asserting that he used only over-the-counter supplements prior to the bout.