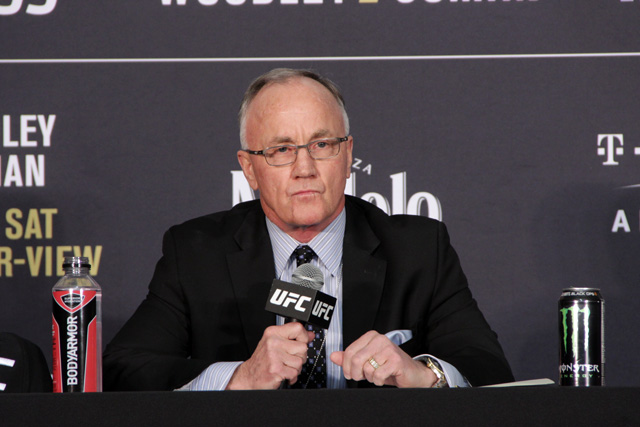 Las Vegas is ready to host Ultimate Fighting Championship events for the first time since the COVID-19 pandemic began.

The Nevada State Athletic Commission on Wednesday unanimously approved UFC events to be held on May 30 and June 6 at the UFC Apex in Las Vegas. NSAC executive director Bob Bennett said the commission is working closely with the UFC and confirmed that the promotion’s coronavirus protocols are in accordance with those of the commission. The UFC recently released updated COVID-19 protocol in advance of Saturday’s UFC on ESPN 9 card. All upcoming events will be closed to the public.

Both UFC on ESPN 9 and UFC 250 will take place at the UFC Apex, the promotion’s own 130,000 square foot production facility unveiled in 2019 and located adjacent to UFC headquarters in Las Vegas. Prior to Saturday’s card, it was primarily known as the home of the first three seasons of Dana White’s Contender Series.

The UFC Apex is expected to be the home of UFC events in the United States for the foreseeable future. The promotion also has events scheduled for June 13, 20 and 27 but those were not addressed by the NSAC during Wednesday’s meeting. Events held out of the country are supposed to be held at “Fight Island,” but those cards have not been formally announced by the UFC.

The NSAC initially suspended all combat sports in Nevada on March 14 due to concerns regarding the COVID-19 pandemic. A subsequent meeting on March 25 was canceled, and the NSAC did not reconvene until Wednesday.

The NSAC’s approval comes on the heels of Nevada Gov. Steve Sisolak’s announcement that the state would relax COVID-19-imposed restrictions in the state, including “sporting events, concerts and theater performances without an audience.”