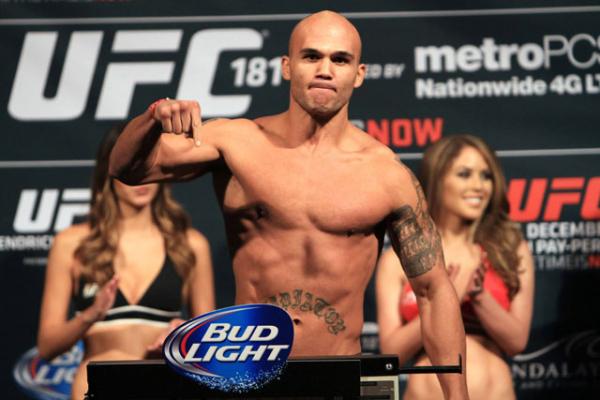 After four fights in 2014, Robbie Lawler is ready for a little family time. | Photo: Jeff Sherwood/Sherdog.com

The win was special for multiple reasons, as it not only rectified Lawler’s loss to Hendricks at UFC 171, but also brought the first UFC title to his training camp, American Top Team. With the victory, Lawler now hopes to enjoy the fruits of his labor in Coconut Creek, Fla., by taking some time off to be with his family.

“It’s starting to sink in a little bit. I went to the gym and everyone was excited. The whole place was chanting. It’s awesome to be a part of it,” Lawler said during a Monday appearance on Sherdog Radio Network’s “Beatdown” show. “I would like to relax, but obviously I want to work on some things and get better as a fighter. I would like to have some time to spend with my family, so I want to fight again maybe in late May, June or July. The bosses might have something to say about that, so we will see what happens.”

Lawler has never allowed setbacks to deter him from his goal of becoming a UFC champion, not even after parting ways with the promotion in 2004 following three losses in four bouts. That move forced “Ruthless” to begin taking fights on the regional scene, slowly working his way back to the UFC.

“I always believed in myself and believed I was capable of doing great things and winning world titles, but first you have to get to those positions,” Lawler said. “It was definitely tough during the down times to believe in yourself, but I just kept trying to get better and that’s what I did. I never gave up and never made excuses.”

Now, Lawler finds himself atop the welterweight division, with a third fight against Hendricks looming. The current champion feels as if a third tilt would end much like the second, with UFC President Dana White wrapping the belt around his waist.

“I’m very confident in my skills and think, if we fought again, I would win,” Lawler said. “Johny is a hell of a fighter, a hell of a competitor, and I look forward to meeting him again. Now that we have each won one apiece -- and they were close fights -- I think we need to figure this one out.”

Also in the mix is Rory MacDonald, who was anointed No.1 contender by White following an impressive victory over Tarec Saffiedine in October. While Lawler didn’t speculate on his first title defense, he did place his trust in those who control the matchmaking decisions.

“If the bosses think that makes sense and that’s the fight everyone wants to see I’m sure they will make it happen, but I’m just relaxing right now. I’m not even thinking about that.” Lawler said. “I’m sure Dana, Lorenzo [Fertitta], Joe [Silva], and Sean [Shelby] will put their heads together and we will see what happens.”

Lawler felt his performance late in the five-round scrap on Saturday was the difference maker, referencing an explosive sequence in the final seconds that ended with Lawler staring a hole right through Hendricks. In the first meeting, Hendricks was the competitor who took control late, en route to defending the title.

“It felt a lot like the first fight. Who’s going to win this last round? Who’s going to cement their place and win the title? I just felt like I went out there and looked to finish. That’s what I tried to do -- I tried to hurt him, tried to finish and win that title,” Lawler said. “That was just a mental spot, just keep moving forward, keep fighting. It was a good thing I wasn’t throwing punches still, I was just so excited and my body was ready to go. It was weird.”

When it came time for Bruce Buffer to read the judges’ scorecards, Lawler was confident his name was going to be announced, listing the overall damage done to Hendricks’ body as a key. Nonetheless, the 32-year-old is aware just how close the fight ended up, crediting Hendricks’ ability of stealing rounds with his grappling.

“I was confident. I felt like I did a lot of damage, ducked a lot of shots, landed a lot of knees and kicks,” Lawler said. “Obviously, Johny’s a competitor. He does a great job of winning rounds, but I just felt like I was the one doing the most damage out there. It was a close fight.”