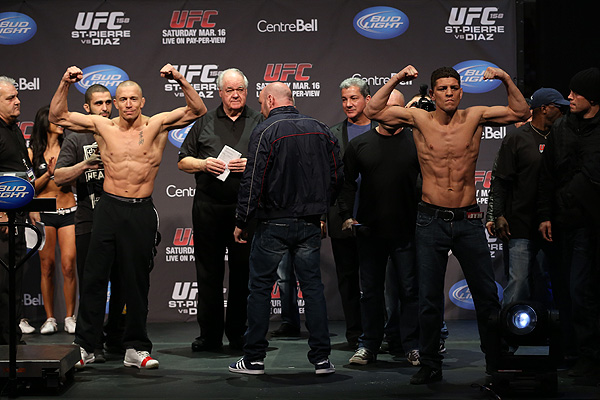 Nick Diaz’s camp plans to file a complaint with Quebec’s athletic commission in the wake of a UFC 158 weigh-in controversy, according to the fighter’s representative, Jonathan Tweedale.

As detailed in a video posted online after the March 16 event, UFC executive Michael Mersch informed Diaz and his camp just prior to the weigh-in that the Quebec commission would not take decimal points into account, meaning that as long as both men weighed in under 171 pounds, they would be considered to weigh 170. Mersch also informed Diaz that he and Georges St. Pierre might be given an extra hour to make weight if necessary.

In a recent statement released to MMAFighting.com, commission rep Joyce Tremblay reiterated that decimal points are not considered when weighing fighters in the Canadian province:

“I wish to inform you that, during UFC 158, no contestants exceeded the weight determined in their contracts. Currently, [the commission] does take into consideration the maximum weight determined by contract when it carries out the weigh-ins before a bout. However, our regulation on combat sports does not take decimals into account. Their consideration is a question of interpretation likely to be debated between the two parties under contract.”

Tweedale disagrees with the statement and told Sherdog.com on Tuesday that a complaint will soon be filed regarding both the weigh-in and drug testing procedures conducted at the event, which took place at Bell Centre in Montreal. Formerly a member of the Vancouver Athletic Commission, the British Columbia-based lawyer released the following statement to Sherdog.com on Tuesday:

“The Quebec commission’s statement is a disappointing admission that the March 16 event was not conducted under the rules applicable to a UFC title fight -- or under the rules the fighters contractually agreed to, upon which rules Mr. Diaz was entitled to rely under his bout agreement.

“Section 168 of the Regulation respecting combat sports provides that the maximum weight that a fighter must achieve at the official weigh-in shall be determined in advance by contract -- and if the fighter does not make the contracted weight -- in this case 170 pounds -- then 20 percent of his purse or ‘the contestant’s remuneration’ will be deducted and paid to his opponent (subsections (7) and (8)).

“The contracted weight for this fight was 170 pounds. 170.9 is not 170, anywhere in the world, for a title fight. There is no question what ‘170 pounds’ means, in the bout agreement, as a matter of contractual interpretation.

“The Quebec commission deliberately relaxed the rule in this case and, by its own admission, allowed their hometown fighter to ‘make weight’ even if he weighed more than the contracted weight.

“Furthermore, section 77 of the Regulation provides: ‘At an official weigh-in, no time shall be granted to a contestant to enable him to increase or decrease his weight.’ It appears that here too, the commission was prepared to relax this rule at the last minute in favor of Mr. St. Pierre.

“Further serious irregularities including, inter alia, the Quebec Commission’s failure to supervise fighters’ provision of samples in connection with testing for Prohibited Substances and Prohibited Methods (under sections 71.1 to 71.6 of the Regulation), will be set out in an official complaint that will be filed imminently.

“In the circumstances, Mr. St. Pierre remains legally and ethically obligated to fight Mr. Diaz at 170 pounds or else vacate the belt in favor of those prepared to fight at welterweight.”

Though the complaint will be filed in Quebec, Tweedale told Sherdog.com that he hopes to receive relief from the UFC.