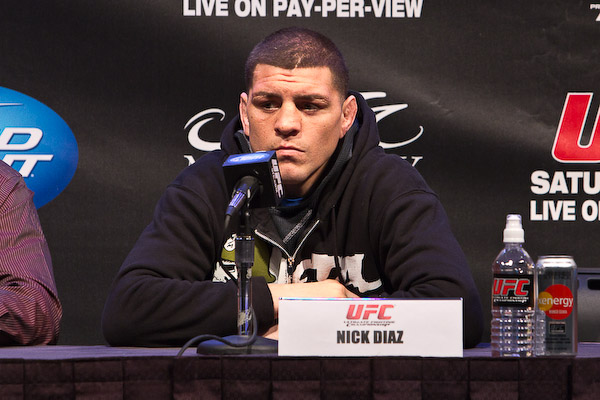 The NAC initially filed its complaint against Diaz several days after his unanimous decision defeat to Carlos Condit, and Diaz was then suspended indefinitely on Feb. 22 pending a disciplinary hearing.

Diaz’s attorney, Ross C. Goodman of Goodman Law Group, responded to the complaint on March 7, alleging that Diaz -- a medical marijuana patient in his home state of California due to his diagnosed attention deficit hyperactivity disorder (ADHD) -- should not be subjected to disciplinary action on the grounds that marijuana metabolites are not a banned substance as defined by the NAC for legal users of the drug.

The NAC then amended its complaint on March 28, alleging that Diaz indeed violated the Nevada Administrative Code by testing positive for marijuana metabolites and by providing false or misleading information on his pre-fight questionnaire. Diaz had checked “no” when asked if he had taken any prescribed or over-the-counter drugs within two weeks of his bout or if he suffered from any serious medical conditions.

On Wednesday, Goodman responded to those claims, reiterating his stance that inactive marijuana metabolite is not a prohibited substance as defined by the NAC in regard to Diaz, who legally uses the drug out of competition.

Goodman also asserts in the document that Diaz responded to the pre-fight questionnaire to the best of his knowledge and did not supply the NAC with false or misleading information. Attaching a signed letter from the physician who recommended Diaz as a candidate for medical marijuana use in California, Goodman submits that Diaz answered the questions truthfully in that marijuana is neither a prescribed nor an over-the-counter drug.

The response also notes that the one-page questionnaire does not provide definitions of terms or examples. As such, Goodman alleges that Diaz’s interpretation that the term “serious medical condition” did not apply to his ADHD was a reasonable one and should also not serve as grounds for discipline. This stance is echoed by Diaz’s physician, Dr. Robert E. Sullivan, who states that while he defined Diaz’s ADHD as a “serious medical condition” when approving his use of medical marijuana, he believes “most laypeople would consider serious conditions to include cancer, heart attacks, strokes, a broken neck, AIDS, etc., but would not include ADHD on that list.”

The former Strikeforce welterweight champion, Diaz, 28, saw an 11-fight winning streak snapped when he was outpointed by Condit in the UFC 143 headliner. Known for his excellent boxing skills and top-shelf conditioning as well as his potent jiu-jitsu game, the lanky southpaw owns notable wins over B.J. Penn, Hayato Sakurai, Robbie Lawler and Frank Shamrock, among others. It is currently unknown when Diaz will appear before the NAC, but the commission’s next meeting takes place April 24 in Las Vegas.