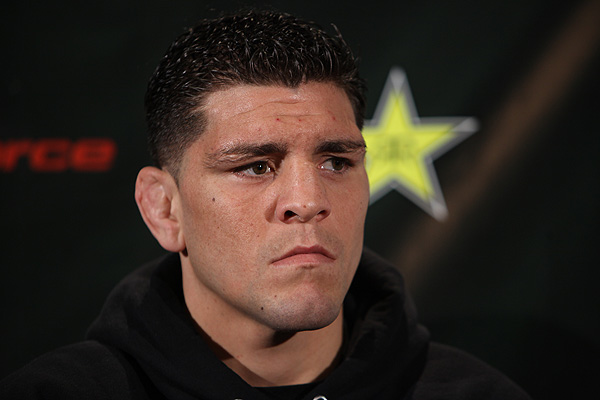 Nick Diaz has been suspended yet again by the state of Nevada. | Photo: Dave Mandel/Sherdog.com


UFC welterweight Nick Diaz on Monday was issued a five-year suspension from mixed martial arts by the Nevada Athletic Commission.

The punishment stems from Diaz’s failed post-fight drug test at UFC 183, which took place Jan. 31 in Las Vegas. The show’s main event saw Diaz suffer a five-round unanimous decision loss to former middleweight king Anderson Silva, who tested positive for steroids and was suspended for one year by the NAC.

In addition to the five-year ban, Diaz was hit with a maximum 30-percent fine of his $500,000 fight purse -- a penalty of approximately $165,000 -- and ordered to repay unspecified costs associated with the hearing. NAC Commissioner Pat Lundvall initially proposed a lifetime ban for Diaz, but that motion went unseconded.

The ruling came after a contentious hearing which lasted more than three hours. Diaz refused to testify or answer questions and instead remained seated behind his counsel throughout the hearing with his arms crossed, often appearing disinterested in the proceedings. Commissioner Lundvall would not accept a “blanket” refusal and at one point attempted to question Diaz, who repeatedly muttered the words “fifth amendment.” Diaz’s counsel objected to the display, stating that the only purpose of the line of questioning was “to create a spectacle to embarrass him and to undermine his exercise of constitutional rights.”

The crux of Diaz’s defense was based around major discrepancies between three drug tests collected within a five-hour period on the night of UFC 183. The first, a pre-fight sample, was taken at 7:12 p.m. and contained marijuana metabolites at a level of 49.731 ng/ml -- well below the minimum threshold of 159 ng/ml. The next test, a post-fight sample taken at 10:38 p.m., was found to contain 733.23 ng/ml -- a level nearly 15 times that of the first test. The third and final sample from 11:55 p.m. contained only 61.104 ng/ml.

Diaz’s medical expert, Dr. Hani Khella, testified that the variations in the test results were “not medically plausible.” Dr. Khella stated that the difference between concentrations in the two post-fight tests could not be attributed to simple rehydration and that Diaz would have had to endanger his life by drinking “30 glasses of water” in such a short timeframe. The doctor testified that the increase between Diaz’s first and third tests was “typical movement that you would expect to see in a more concentrated sample or more dehydrated sample.”

Much was made by Diaz’s counsel of the fact that both negative tests came from the Sports Medicine Research and Testing Laboratory (SMRTL), a lab accredited by the World Anti-Doping Agency (WADA), while the positive test was analyzed by the non-WADA-accredited Quest Diagnostics. Commissioner Lundvall dismissed the notion that the results were flawed, calling Quest’s testing procedures “more sophisticated” than those of SMRTL.

Dr. Khella also stated his belief that Diaz’s urine sample was mishandled and that the collector failed to properly document chain of custody. Aldo Galvan, the NAC inspector assigned to Diaz at UFC 183, testified that the samples were handled properly and sealed in Diaz’s presence.

The arguments from Diaz’s side fell on deaf ears, as NAC commissioners pointed to the fighter’s two previous marijuana-related suspensions in the state of Nevada as well as his repeated failure to properly fill out pre-fight medical questionnaire. Diaz was suspended for six months in 2007 following his fight with Takanori Gomi, then for one year in 2012 after his bout with Carlos Condit.

If Diaz’s suspension stands, he will be ineligible to compete in sanctioned mixed martial arts in the U.S. until February 2020.