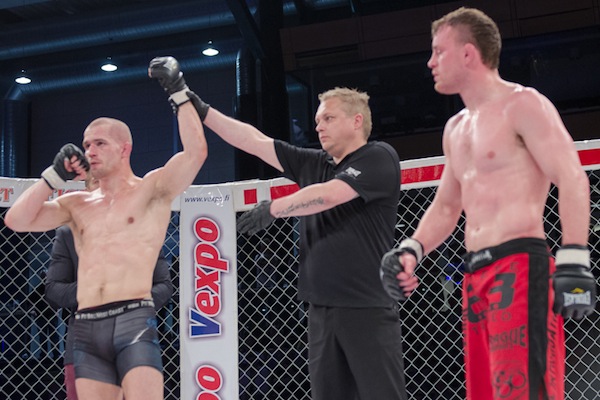 The Finns did just that, as Tom Niinimaki, Anton Kuivanen, and Marcus Vanttinen all defended their promotional titles in impressive fashion.

In the headlining bout, featherweight prospect Niinimaki outwrestled former WEC bantamweight champion Chase Beebe to take control of the bout and retain his belt via unanimous decision. “Stoneface” used an inside trip to take the fight to the ground in the first round to set the tone of the bout, using his strength and takedowns to put the tough-wrestling Beebe on his back. When the fight was brought back standing, the Finn swept the American’s feet, sending the Flawless MMA representative back down to the mat.

Over the final 10 minutes, Beebe looked for guillotine chokes to end the fight, but Niinimaki’s body punching and slams took their toll on the Chicagoan, who couldn't find a finish before the judges had their say. The 30-year-old Turku native has now won 10 straight, improving to 19-5-1. Beebe falls to 24-10-1 in his MMA campaign.

Perhaps the biggest draw on the night, however, was locally popular UFC veteran Anton Kuivanen, who defended his lightweight crown with a hard-fought unanimous verdict over “The Ultimate Fighter” Season 9 alum Jason Pierce, improving to 18-6. Both men sustained low blows in the first half of the bout, but Kuivanen, 29, found smarter use of his kicks over the bout's second half. The GB Gym fighter began landing nasty left kicks to the body that echoed through the arena before wearing Pierce down with knees from the clinch in the final round. A late head-and-arm throw from Pierce surprised Kuivanen, but it was too little to late to stop Kuivanen from the decision win and getting to celebrate with a backflip off the top of the cage.

Marcus Vanttinen retained his Cage light heavyweight belt without much resistance, charging Frenchman Boubacar Balde and slamming him to the mat, where Vanttinen dominated with elbows to the face and knees to the body before taking the back at the end of the round. In the second, Vanttinen slammed Balde down and hammered him with elbows until a submission opportunity arrived. “Caveman” took the back, then the rear-naked choke at 3:01 of the second round.

The 25-year-old Vanttinen, now 22-5, had lost three of four entering the bout after racking up an 11-fight win streak.

Kai Puolakka and Mickael Lebout had a three-round welterweight war, with the Finn ending up on top. Each fighter was able to show effective mixing of punches and kicks early, but it wasn’t until two minutes left in the second until the GB Gym product was able to land hard, straight punches putting the French fighter on his heels. Lebout got Puolakka on the mat late in the third, but it was Puolakka who was able to reverse, finish the bout on top and earn a unanimous verdict. Photo: Iikka Nikkinen/Sherdog.com
Balde offered Vanttinen little challenge.
Frenchman Shamil Ismailov won in devastating fashion with a knockout of Finnfighters Gym’s Juho Valamaa in the second round. The grappler from Finland was in control early, almost finishing with a guillotine in the first round, but the tide turned as the fight went on on. Ismailov began finding a home for his looping punches in the second round, alternating powerful head and body shots. Valamaa went down midway through the second round after being battered against the cage, and Ismailov finished off the Finn with two heavy-handed rights to the downed opponents face before the referee jumped in.

At bantamweight, Tuomas Gronvall tapping Miika Kauppinen with a brabo choke at 1:25 of the second round, while featherweight Mika Hamalainen needed only 48 seconds to tap Jere Varila with a heel hook.