Sylvester Stallone arrived in Rio de Janeiro last week and one of his first requests was to meet the “Brazilian Rocky Balboa,” Antonio Rodrigo Nogueira.

The silver screen’s most endearing underdog has started filming his new film “The Expendables,” a testosterone-fueled vehicle that will star a plethora of action stars, including Jet Li, “The Transporter” Jason Statham, and a familiar newcomer named Randy Couture. Stallone also took a private meeting with Nogueira. The former Pride and UFC champion and his brother Rogério were discreetly picked up and transported by van to Mangaratiba, a small city located an hour outside of Rio, where most of the movie will be filmed.

“We were really impressed about his knowledge of MMA. He even recognized I was Rogério and Rodrigo was Rodrigo, which is not really usual,” said the Nogueira twin, who stayed with his brother and Stallone from 8 a.m. until midnight to observe filming.

“Every scene Stallone finished, he came to talk to us about MMA, so we invited him to see a MMA event that we would produce especially for him two weeks later,” said Nogueira.

When Stallone said he wouldn’t be able to attend the show in Rio, the famous fighting brothers did one better. They organized a private event in 24 hours for Stallone to watch.

“Stallone was very nice bringing me here so I just decided to reciprocate, inviting him and Jason Statham, who is a real, great MMA fan, to see some MMA at my headquarters,” said Rodrigo Nogueira. 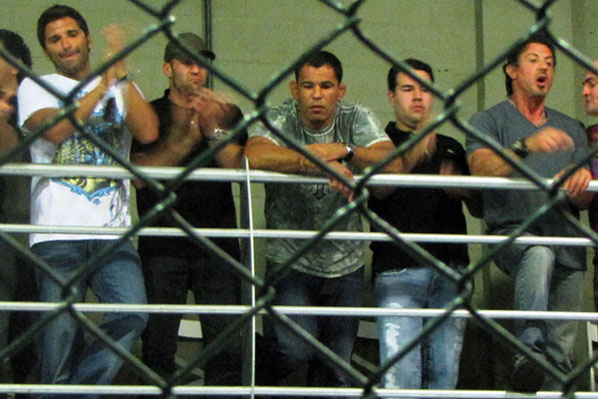 Photo by Marcelo Alonso/Sherdog.com.
Stallone and Statham arrived with an entourage of 15 people and were welcomed by the brothers, Vitor Belfort, UFC middleweight champion Anderson Silva and Wallid Ismail to take in four fights that all ended by submission or knockout.

“Finding the fighters was not the most difficult; there are many tough guys willing to fight in Brazil. The most difficult was keeping the event secret, to not allow any press to come in. Nobody knew Stallone would be there,” said Rogério Nogueira. “When the fighters found out that Stallone was there, they got really excited.”

“’Rocky’ is a movie that has inspired every fighter,” said the 32-year-old legend. “I always admired Stallone and could never imagine that one day I would receive the ‘real Rocky’ in my house. It was an unforgettable moment for me.”