It wasn't pretty, and at times it was downright frustrating, but Nova Uniao added another champion to its gym Wednesday night, as Hernani Perpetuo took out both Pride veteran Daniel Acacio and UFC veteran Edilberto de Oliveira by split decision to conquer a one-night, four-man grand prix at Brazilian promotion Fight Club's inaugural card at Via Show in Sao Joao do Meriti, Rio de Janeiro.

Perpetuo, a native of Rio's Flamengo neighborhood, was either blessed or cursed by his circumstances in the tournament. Having started slow in his semifinal bout with Acacio, Perpetuo suffered two deep cuts on his scalp from Acacio's ground-and-pound elbows in the first round. However, the Nova Uniao product evened the bout in the second, scoring with heavy low kicks on his veteran foe. After two rounds, the judges saw the bout unanimously 19-19, forcing a three-minute overtime round.

Crocota advanced by earning a one-sided unanimous decision (20-18, 20-18, 20-18) over Ryan Gracie jiu-jitsu black belt Viscardi Andrade, who entered the tournament after Jose Gomes de Ribamar pulled out due to injury. 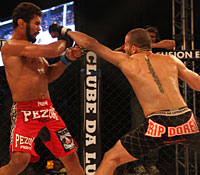 
The Bahia native was aggressive from the beginning, landing many hard right hands and forcing Andrade to retreat for the majority of the contest.

Andrade had a brief salvo of offense in the second round, but it lasted just moments, as a Crocota right cross dropped him shortly afterward, sealing the fight for the outspoken Oliveira.

The main event was a tedious affair, and not through any fault of its fighters. The scalp lacerations of Perpetuo began to stream blood in the bout, despite the amount of vaseline applied into the cuts.

the bout, using his counterpunching and low kicks to stop the forward momentum of the aggressive Crocota, referee Artur Mariano called for an inexplicable six cut checks over the last 10 minutes of the fight, in addition the rignside doctors examining Perpetuo between rounds.

Perpetuo also had to overcome adversity elsewhere in the third round, as he took Crocota's thumb to his eye from an errant jab, and also needed to tough it out through a tight guillotine in the last 30 seconds that looked like it might force a tap. However, Perpetuo heard the final horn.

Judge Sylvio Behring saw it 30-27 for Perpetuo, and Ivan Melo had it 29-28 for the Nova Uniao fighter. and took two 29-28 scorecards to earn his second split nod of the evening. Dissenting judge Paulo Borracha saw it 30-28 for Crocota.

"Daniel Acacio was the most complete fighter in the tournament. He was the favorite. Crocota had the best boxing and the experience advantage," Perpetuo explained after his tournament win. "But I came here with the biggest heart and showed I wanted this more than them."

With the tournament victory, Perpetuo moves his MMA mark to 12-3 and solidifies himself as another one of Nova Uniao's bright young talents. As well, he picks up a bonus of 5000 reais -- just under $3200 USD -- for his win. Crocota will receive 2500 reias as runner-up.

In the tournament reserve bout, Kell Santos took a controversial verdict over long-time vale tudo veteran Claudionor Fontinelle. In an exciting fight, Fontinelle was the aggressor but was docked a point due to a yellow card for kicking Santos while he was grounded. As a result of the deduction, the Paraiba native Santos was announced the winner by split decision, taking scores of 20-19 from judges Rodrigo Savendra and Ivan Melo. Sylvio Behring saw the bout 19-18 for Fontinelle. 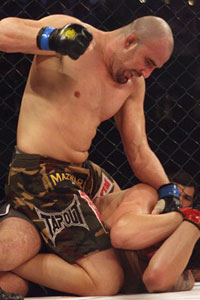 Teixeira, competing as a 234-pound heavyweight, stuffed takedown attempt after takedown attempt on his way to a technical knockout win in the second frame. From the opening bell it was clear that the 2003 ADCC champion wanted no part with TeixeiraÂ´s striking game. He had absolutely no success bringing the fight to the ground during the first round and had to be stood up by referee Artur Mariano on several occasions.

In the second round, the confident Teixeira showed less respect for Cruz’s vaunted submission game and end up on top after another takedown attempt. He took his time to pass "Pe de Pano's" guard and then unloaded a flurry of punches before Mariano saved Cruz from the onslaught at 4:21 of the second frame.

“I am also a black belt in jiu-jitsu. I finished fourth at ADCC. However, thatÂ´s his area and I had to respect him on the ground,” said a happy Teixeira after his 11th straight win.

On his future, the Rio de Janeiro-based fighter said, “Thank God I was able to get the win and hopefully IÂ´ll finally be able to move on and fight outside Brazil in the near future."

The 31-year-old Teixeira, now 13-2, is in the process of awaiting a green card. Married to an American citizen, Teixeira hasn't fought in North America since March 2008.

After getting an early takedown in the first round and advancing to take ShiraiÂ´s back, Heleno had to endure a late comeback by the Japanese fighter, who not only managed to free himself from HelenoÂ´s back mount but also got a knockdown and landed some heavy shots from the top at the end of the round.

The second round saw less action from both fighters, but it still had its moments, with Shirai working his ground-and-pound from the top but facing real danger late in the round when Heleno got his arm and started to position his hips for an armbar, which he managed to escape. However, the pace came to a halt in the third, as neither man effected much offense.

Sylvio Behring and Paulo Borracha saw the bout 29-28 and 30-28 for Heleno respectively. Ivan Melo had a 29-29 draw. Heleno's decision victory is his ninth straight win, moving to 22-5.

“It was tough fight. I was a late replacement for Murilo Bustamante and had to fight above my natural weight class," said Heleno. "Thank God it all worked out fine for me." 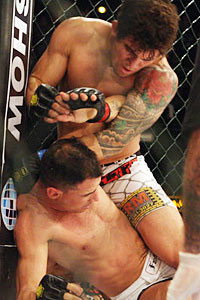 The early left hook followed by a powerful slam set the tone in what was a brilliant showing by Torres.

Displaying a full array of grappling moves, Torres went from one position to another, threatening with a rear-naked choke before finally tapping Pachu with a straight armbar from half guard at 2:58 in the opening frame.

"[The UFC] said I had to finish four opponents to get back. This is my fifth straight finish, all of them in the first round." said Torres after the victory.

The scrappy Guerra, who stood in for Gordo Jiu-Jitsu product Diego Braga, didn't back down against one of Brazilian Top Team's brightest prospects. Both rounds saw Santos using his superior takedowns to get the fight to the ground, whilr hurting Guerra on the feet with impressive kicks. Guerra answered with strong boxing, targeting the northeastern Brazilian's body.

However, at the end of two rounds, the Espirito Santo-based "Chambinho" limped back to his corner on a ginger right leg, and retired on his stool, giving Santos his seventh straight victory.

After giving up an early takedown, bantamweight Eduardo "Kiko" Felipe seized opportunity and choked Junior Oliveira in the second round.

After standing back up, "Kiko" imposed his superior striking game, landing hard punches and putting Oliveira on the run on a couple of occasions. Midway through the second frame, Felipe locked up a quick guillotine off of an attempted Oliveira takedown, forcing the tap at 2:55 of the round.