What started out as a slow, plodding heavyweight duel between Mike Hayes and Alexey Oleinik turned into a bloodbath.

Oleinik won a split decision from Hayes in the Bellator Fighting Championships Season 3 heavyweight tournament quarter-finals at Bellator 26 on Thursday at the Kansas City Power and Light District in Kansas City, Mo. All three judges scored it 29-28, two of them in Oleinik’s favor.

Cut near the right eye by an accidental head butt late in the second round, Hayes bled the mat red by the time the curtain closed.

Out to a strong albeit meticulous start, Oleinik tied up Hayes on the ground, as the Ukrainian submission specialist began his methodical search for submission. Though unsuccessful, he controlled the round from his back and kept Hayes on the defensive. Round two -- which featured the head butt -- followed a similar pattern, as Oleinik embraced the fight on the ground and went for his patented Ezekiel choke. Again, his attempts proved fruitless, and by the end of the period, Hayes was in control, punctuating his efforts with a crisp left hook after a restart.

Oleinik dragged his foe to the canvas early in the final round, and the blood from Hayes’ cut sprang forth. Within minutes, both heavyweights were bathed in it. Hayes -- who fought through another attempted Ezekiel choke -- did his best to stay upright, but Oleinik pressed forward, eating punches and delivering a few of his own. The American closed well, as he worked uppercuts and knees from the clinch but failed to sway the opinions of two of the three cage-side judges. 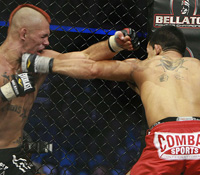 Dave Mandel/Sherdog.com
Vega (right) vs. Tims
Meanwhile, Jose Vega survived a scary encounter with a Danny Tims right hook to notch a unanimous decision in the opening round of Bellator’s bantamweight tournament. All three judges sided with Vega, by 29-28, 30-27 and 29-28 counts.

Tims rattled Vega with his aforementioned right hand inside the first 10 seconds and swarmed with punches, only to wind up in bottom position. He paid a price for his aggression, as Vega recalibrated and went to work. Tims threatened with submissions from his back, but his opponent maneuvered into side control and then the North-South position. The two bantamweights returned to their feet for the final 80 seconds, and Vega wobbled Tims with a late left hook that closed the distance in the round.

From there, Vega took command. He routinely beat Tims to the punch in rounds two and three, stuffed takedowns and scored with leg kicks and jabs. Vega delivered a timely takedown with little more than a minute to go and racked up the ground-and-pound points from the top as the fight closed.

“It was a lot tougher than I thought it was going to be,” Vega said. “I thought he would be a little hesitant on his feet. He stayed banging till I touched him with something, [then] he wants to come shoot in. But I’ve got wrestling, man. You’re not taking me down easy.”

In the last women’s 115-pound tournament quarter-final match, Lisa Ward dissected the previously unbeaten Aisling Daly on the ground en route to a one-sided unanimous decision. All three judges scored it 30-27 for Ward, who joins Megumi Fujii, Jessica Aguilar and Zoila Frausto in the tournament semi-finals.

Ward grounded the Cage Rage veteran repeatedly with head-and-arm throws from the clinch and -- with the exception of a second-round hiccup in which Daly reversed position -- kept her on the bottom with superior wrestling and ground-and-pound. Ward spent the final three minutes of the fight on the fading Daly’s back, as she worked for a rear-naked choke and attacked with sporadic punches to the head. 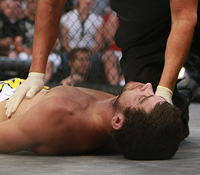 Dave Mandel/Sherdog.com
Carl choked Stinson out cold.
Finally, Steve Carl qualified for Bellator’s Season 4 welterweight tournament, as he zapped Tyler Stinson with a first-round guillotine choke. The end came 2:30 into round one, as Stinson fell into unconsciousness.

Carl secured a takedown inside the first minute, only to find himself encased inside the long, lean legs of his opponent, who had tightened a triangle choke around him. Carl attempted to free himself with a slam but failed, though he ultimately escaped. Resilience kept him in the fight.

“I forgot I was fighting for a second,” Carl said. “I felt myself going out.”

During a scramble, Carl returned to his feet, caught Stinson with his neck exposed and locked in a tight standing guillotine choke. He dropped down, wrapped his opponent in full guard, and, in a matter of seconds, Stinson was out cold.

“I had to ask my corner if I tapped out,” Stinson said. “All of a sudden, I’m looking up and I’ve got guys asking me if I’m OK. I was in dreamland.”