Irvin came swinging out and landed a heavy right hand early, then wound up on top when the fighters hit the floor. The “Sandman” pressed Oliveira against the fence, looking to ground and pound the Brazilian, but Oliveira locked on a triangle-armbar combination as Irvin postured up to punch. Irvin tapped at 1:33 of the first round to end the heavyweight affair.

In the evening’s co-main event, Micah Miller handily submitted TPF featherweight champion Isaac DeJesus in the first round. Unfortunately for Miller -- who failed to make weight at 147 pounds -- the fight was not for the belt.

DeJesus stormed across the ring at the opening bell and was immediately taken down by Miller. From there, the bout was all Miller. The lanky American Top Team product controlled from top position, working patiently from full mount until DeJesus rolled to attempt an escape and Miller sunk in the winning rear-naked choke. DeJesus submitted at 4:11 of the first round, but remained the 145-pound champion due to Miller’s weight-cutting woes. 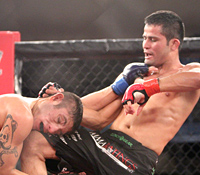 J. Sherwood
'Formiga' bested Martinez.
Undefeated Brazilian Jussier da Silva bested Danny Martinez in their anticipated flyweight matchup. Martinez was game and showed flashy strikes, but the ground game of “Formiga” was too much. Da Silva spent much of the fight on Martinez’s back, searching for a submission, but Martinez hung in till the final bell.

All three judges scored the bout 29-28 for da Silva, awarding him the unanimous decision in his first North American bout.

The fight -- which took place exclusively on the feet -- was a slow-paced affair in which neither fighter seemed willing to engage. The first two rounds saw the fighters circle, throwing single punches which rarely landed. Then, Alessio landed a straight left that sent Collins tumbling backwards. “The Natural” followed Collins to the mat and pounded him out for the win.

The victory extends Alessio’s win streak to seven in a row. The newly-minted champion already has another fight lined up, as he’ll meet Siyar Bahadurzada in Belgium on Jan. 30 for the second round of Ultimate Glory’s MMA World Series.

“Polish Pistola” Seth Baczynski defeated Tim McKenzie by first-round knockout in a battle of UFC cast-offs. Both men came out fast, swinging wildly, before Baczynski landed a knee that dropped McKenzie. But, when Baczynski pounced, McKenzie locked on an armbar so tight that it looked to be the end of the match. His left arm twisted at a grotesque angle, Baczynski managed to free himself from the hold, landing a series of punches and elbows with his right arm that put out McKenzie’s lights. The official end came 2:15 into round one. 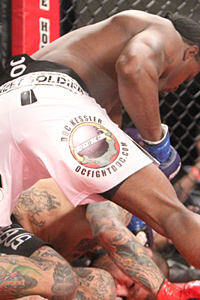 J. Sherwood
Silva stopped Jara.
Jay Silva made short work of heavily-favored veteran Jaime Jara, who came out swinging wildly to open the contest. Silva met “El Cucui” with a counter and Jara dropped to the floor. Jara got to his feet, but Silva stayed on him, dropping him again and causing Jara to turtle up. Silva spared Jara further punishment by holding back on a big shot at the end of the bout and earned the victory just 33 seconds into the first round.

In other action, Dream heavyweight veteran Jimmy “The Titan” Ambriz bloodied Mike Guidry before forcing a lukewarm stoppage due to punches at 4:29 of the second round.

Tommy Vargas took a unanimous decision over Martin Sandoval in their bantamweight bout.

Tony Llamas forced Sergio Quinones to submit to an armbar at the 2:03 mark of the second round in their 150-pound match.

Nik Fekete opened the show by scoring a technical knockout win over Chris Bostick at 4:06 of the second round.