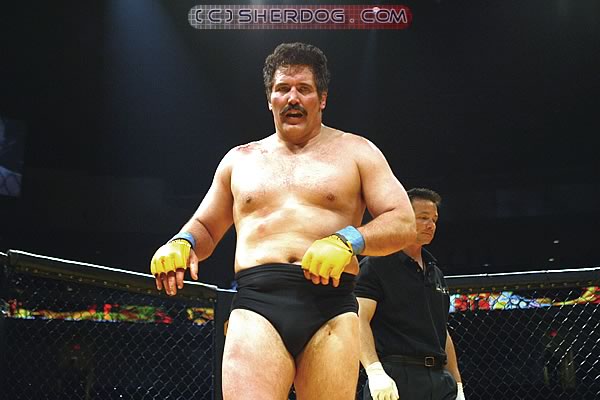 That means it’s been roughly 19 years since Dan Severn battled Royce Gracie in the UFC 4 final. In November 2011, Severn joined the Sherdog Radio Network’s “Rewind” show to discuss that bout and much more.

Severn on training for his UFC debut at UFC 4: “I drove from Coldwater, Michigan, over to Lima, Ohio, and trained at Al Snow’s professional wrestling gym for a no-holds barred match because a professional wrestling ring was the closest I could come to a cage. Al and a couple of the other professional wrestling protégés, they had an old pair of boxing gloves and the name of the game was to try to punch and kick at Dan, and I would either stay outside of range or close the distance. I’d either clinch them or take them down and slap on an amateur wrestling move and turn it a little bit illegal and make them scream and squawk, and that was my training camp. Five days, an hour and a half a day, and I did not train a single strike.”

On having top position against Royce Gracie in the UFC 4 final: “I really wasn’t certain what to do. What crude submissions I had practiced for those whopping five days, they weren’t exactly working for me. Then it started to cross my mind, I’m thinking I’m going to have to hit this guy. I actually had to think about it. … Honestly, I was probably struggling more with my conscience than I probably was ever struggling against an opponent. Even when I did finally throw anything, it was peripheral, to the side.

“After throwing a few different strikes, I’m actually staring right down at him. I’m a big believer that the eyes are the window to a man’s soul, and he’s looking over to his dad outside the cage. I could read exactly what’s going through his mind. It was kind of like, Dad, I’m hanging in there, but you throw that towel in, I wouldn’t hold that against you. Then my eyes go from Royce’s, I go over to Helio’s. He’s outside the cage. He does have the towel in his hand. He has it down, but he kind of lifts it up, crosses his arms and just kind of shakes his head no, that he wasn’t going to do it. I’m looking at him and I’m thinking, You old bastard. … You’d let me kill your kid here right now for Gracie Jiu-Jitsu, wouldn’t you?”

On eventually tapping to a triangle choke: “I’m not certain what I want to tell you on that one. All I can say is, only Dan Severn really knows what went down that night. Would I like to have a rematch? Sure. Will it ever happen? I kind of doubt it. … I wish I would have known a little bit more about what that whole deal was with the organization and things of that nature. I might have viewed things a little bit differently, might not have been so kind that night.”

Listen to the full interview (beginning at 20:35).