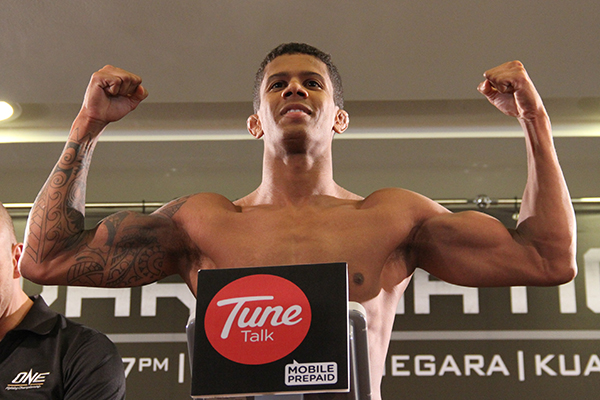 Adriano Moraes will fight for gold in his next outing. | File photo: J. Goyder


Brazilian flyweight Adriano Moraes demonstrated why he is one of the most touted prospects in the division by submitting Kosuke Suzuki at One FC 17 “Era of Champions” on Saturday night.

Moraes put on a virtuoso grappling display at Mata Elang International Stadium in Jakarta, Indonesia, taking down Suzuki throughout the fight and dominating him on the ground. In the first round, the Japanese fighter was active from his back with kimura and armbar attempts, but Suzuki still spent virtually the entire five minutes in adverse positions and ate a soccer kick in the closing exchanges.

In round two, Moraes transitioned seamlessly from a flying knee attempt into a successful double-leg takedown. Suzuki was able to escape and score with some knees as the Brazilian covered up against the cage, but Moraes was merely biding his time and eventually sprang out, winding up in the Shooto veteran’s half guard.

Suzuki knew he was well behind going into the final round and came out aggressively, but Moraes was able to easily time the charge and score another takedown. The “Black Diamond” moved into half guard and worked for an arm-triangle choke which forced the tap at 1:35, snapping Suzuki’s six-fight winning streak.

It was Moraes’ second successive submission win against a Japanese fighter, moving his record up to 11-1. His next fight will be against another of the evening’s winners, Geje Eustaquio, for the vacant One FC flyweight title.

Eustaquio was looking for this third One FC win when he took on Shooto veteran Kentaro Watanabe in what turned out to be a flyweight eliminator, but the Filipino had to weather an early storm after being rocked by a hard right hand in the opening round.

The Japanese fighter failed to build on his early momentum, and Eustaquio’s superior work rate saw him take control of the last two rounds, peppering Watanabe with kicks and punches for a unanimous decision win. Eustaquio’s win takes his record to 6-2 and secures him a 125-pound title shot against Moraes. Watanabe drops to 10-5.

The biggest cheer of the night was reserved for Fransino Tirta, who fought in Jakarta for the first time in almost a decade. The Indonesian bantamweight was coming off a near three-year absence, but it took him just 70 seconds to take Sami Amin down and submit him with a rear-naked choke. Tirta’s record improves his to 16-0-1, while the Egyptian drops to 4-2.

It was an emotional night for middleweight Aung La Nsang (15-9-1), who moved to the United States as a teenager and was reunited with his father and brother for the first time in 11 years a couple of days before the fight. The “Burmese Python” definitely didn’t let the occasion affect his performance, as he knocked out Mahmoud Salama (4-5) with ground-and-pound at 1:07 of round one.

Yohan Mulia Legowo (7-3) was returning to action after a three-year layoff, and the Indonesian could not hang with the striking of Malaysian-born, New Zealand-based featherweight Ev Ting (7-2). Ting rocked his fellow Legend FC veteran with punches and body kicks, causing Legowo to collapse to the ground at 4:35 of round one.

Earlier in the night, Dejdamrong Sor Amnuaysirichok (1-0) stopped Jomanz Omanz (0-1) with knees at 4:33 of round one in a battle of flyweight debutants; Gianni Subba (5-1) submitted Ruel Catalan (2-5) via triangle choke at 2:43 of round two in another flyweight fight; Mohammad Sotounzadeh (1-0) stopped Zuli Silawanto (6-8) with a slam and punches at 2:24 of round one of their welterweight matchup; and Desi Rahayu (1-0) beat Ella Tang (0-2) by unanimous decision in a bantamweight bout.