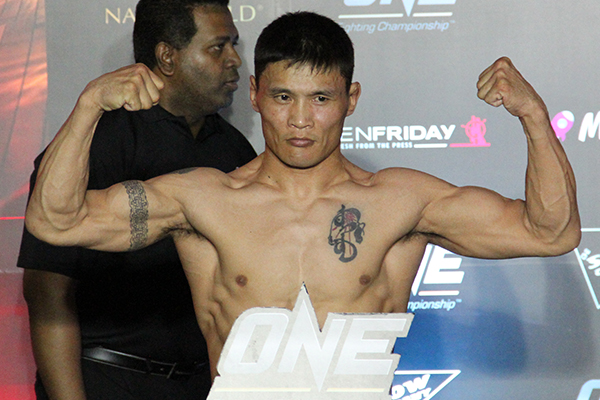 
One Fighting Championship has finalized its Aug. 29 card in Dubai with nine fights, including three title bouts.

One FC 19 “Reign of Champions” will take place at Dubai World Trade Centre in Dubai, United Arab Emirates, and is to be headlined by a welterweight title match pitting champion Nobutatsu Suzuki against No. 1 contender Ben Askren. Also, One FC lightweight ace Shinya Aoki will look to defend his crown against Ultimate Fighting Championship and World Extreme Cagefighting veteran Kamal Shalorus.

Oishi was initially supposed to face Eric Kelly, but Kelly, who recently competed in a brutal fight against Rob Litista at One FC “War of Dragons,” was not medically cleared to compete. Narantungalag will step in following his victory over former One FC featherweight champion Honorio Banario last May. The bout will serve as Oishi’s second title defense.

McSweeney is a heavyweight by design and is currently riding a streak that includes nine wins in his last 12 fights. The Englishman will drop down to 205 pounds for his matchup with Kaminishi. With a record of 8-1, Kaminishi is a former Heat heavyweight champion and has also won Brazilian jiu-jitsu titles across multiple weight divisions.

Julaton is the first Filipina boxer to win the women’s WBO super bantamweight and IBA super bantamweight world championships. “The Hurricane” was successful in her One FC debut, defeating Aya Saber by technical knockout. Osman also has competed in one professional fight and is the first female Malaysian mixed martial artist to compete in a major MMA organization. “Athena” lost her debut at One FC 11 against Sherilyn Lim by split decision.

Amnuaysirichoke holds a muay Thai record of 282-65 and serves as an instructor at Evolve MMA. He won his promotional debut against Jomanz Omanz via TKO in the first round. Yaakub is a former WMC Asian champion and I-1 Asian champion. He will be making his debut in the sport against a fellow muay Thai champion.

Walid is currently undefeated after competing in local promotions in the United Arab Emirates. He holds a Brazilian jiu-jitsu purple belt, as well as a black belt in karate. He has finished all three of his professional fights. Meanwhile, Donayre has won seven of his last eight bouts and will be making his debut under the One FC banner.