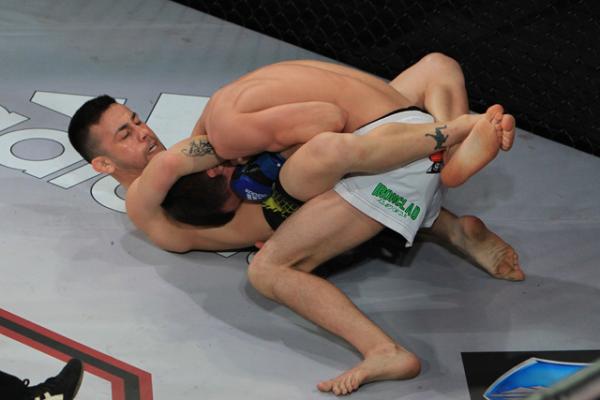 The vacant title was awarded to “T-City” after five hard-fought rounds, during which both men saw their momentum rise and fall. Each fighter was active in the standup and the ground game, with the featherweights trading multiple submission attempts in the second period of their competitive championship contest.

While round three saw the unbeaten Californian take Koch’s back during a takedown attempt, the 22-year-old came closest to finishing the fight in round four, when he locked up the triangle choke for which he was nicknamed. Ortega squeezed the hold and then cranked on Koch’s exposed arm, prompting the Iowan to almost tap out before changing his mind and gutting his way out of the technique.

The fifth frame no doubt belonged to Ortega, who spent the majority of the period in top position after securing a pair of takedowns. At the bout’s conclusion, judges Michael Bell and Ron McCarthy saw the fight 49-46 for Ortega, while judge Gene LeBell dissented with a 49-46 score for Koch.

“I get choked by the Gracie brothers, so the submissions don’t really scare me so much. I’m very comfortable with them, and that comes from great jiu-jitsu coaches,” said Ortega. “I’ve got to talk to my coaches, but I’m ready for the UFC when they call.”

The unbeaten 135-pounders both landed body kicks to start the contest, but the champion’s strike appeared to do far more damage, prompting Daniels to shoot for a single-leg takedown. Munhoz caught him in the process, however, and latched onto an arm-in guillotine, gradually tightening his squeeze until Daniels was forced to tap out. Following the bout, Munhoz, who now sports a perfect 10-0 pro record, asked the Ultimate Fighting Championship’s matchmakers for an opportunity to compete in the Octagon.

“He was a very tough opponent, a young and hungry guy, but I have been training hard,” said Munoz. “Joe Silva, Sean Shelby, I’m ready. Please give me the opportunity to fight with the best fighters in the world.”

Kevin Casey made mincemeat of Eddie Mendez in their middleweight bout, as “The Ultimate Fighter 17” alumnus quickly took the fight to the floor and passed to side control. The Brazilian jiu-jitsu black belt first looked to apply a kimura and then a north-south choke, but “King” ultimately did his damage with strikes from the mount, filleting his opponent’s face with a series of elbows that brought a swift halt to the contest.

Justine Kish kept her perfect pro record intact, despite the best efforts of game Canadian Randa Markos Thomas. The first 10 minutes of the strawweight contest were dominated by the larger Kish, who used a varied and violent muay Thai attack to split Thomas’ lip and open a sizeable cut over her left eye. Though Thomas managed to score a pair of takedowns in the final round and even threaten with a slick armbar attempt, it was Kish who received the unanimous nod on the judges’ scorecards.

Earlier, taekwondo practitioner James Moontasri handed Rick Reger his first pro defeat, stunning “Boomer” with a sharp counter right uppercut before climbing onto his back and putting him to sleep with a rear-naked choke.

Boston Salmon made quite an impression in his pro debut to open the evening’s AXS TV broadcast, hurting the previously unbeaten Perceu Friza with a front kick to the body and then swarming him with punches to earn a first-round technical knockout.