ST. LOUIS -- Alistair Overeem made a triumphant return Saturday to the Strikeforce cage after a two-and-a-half year absence, defending his heavyweight crown against Brett Rogers at Strikeforce “Heavy Artillery” before 8,136 fans at the Scottrade Center.

“It’s been a while, but I’m back,” Overeem said. “I’m the champion of Strikeforce, and I ain’t going nowhere. I’m here to stay. I was in the best shape of my life, and I think this fight proved it.”

Overeem staked out the center of the cage, while Rogers looked less than eager to engage the Dutch kickboxer as the bout got under way. Overeem opened the scoring with a pair of chopping leg kicks to the outside of Rogers’ lead leg and then followed with a hard inside kick to the same limb.

Rogers, who lost for the first time to Fedor Emelianenko in his last start, tried to get into the match with his heavy hands, but Overeem clinched with him when he closed the distance and easily tossed the 264-pounder to the canvas.

Overeem straddled Rogers and battered him with punches before settling into side-control. The champion then delivered a brutal knee to the Rogers’ body. He then moved into the mount and launched a salvo of shots, mostly right hands, which left the challenger completely defensive. Referee “Big” John McCarthy halted the bout 3:40 into the first round.

By retaining his title, Overeem remains hopeful he will now get a chance to face Emelianenko later this year. The Russian legend will first have to get past Fabricio Werdum on June 26 in San Jose, Calif. Afterward, Overeem put Emelianenko in his crosshairs.

“His management declined for him to fight me tonight,” Overeem said. “Respect for Brett, ’cause he stood up and wanted to fight me like a man. I think now it’s Fedor’s time.” 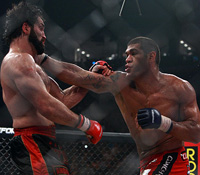 A renewed Antonio Silva got back into the win column against former UFC heavyweight champion Andrei Arlovski, as he scored a unanimous decision in the co-main event. Silva employed a heavy stand-up attack to outpoint Arlovski in a 15-minute duel. Scores were 29-28 on all three cards.

Silva tested Arlovski’s questionable chin a number of times. The Belarusian hung tough but could not get untracked offensively. When he did land a flush shot, Silva just walked right through it.

Silva set the tone for the bout early in the first when he took the center of the cage and beckoned Arlovski to trade with him. He got the better of the early exchanges before tossing an off-balance Arlovski to the canvas with about one minute left in the round.

After a close second round put the outcome in doubt, Silva sealed the win when he elevated Arlovski and slammed him to the mat late in the third. The round was competitive up to that point, but Silva’s ground-and-pound attack swayed the judge’s to deposit the final frame in his column.

Ronaldo "Jacare" Souza, in a workmanlike effort, defeated veteran Joey Villasenor by unanimous decision to cement his place atop the Strikeforce middleweight division’s list of contenders. Scores were 30-27, 29-28 and 29-28 for Souza.

The jiu-jitsu savant showed off a solid takedown series over the three- round affair, as he put a game Villasenor on his back at will throughout the first two rounds and lumped him with heavy shots from top position.

A relentless Jacare battered Villasenor throughout the opening frame and had him on the ropes on more than one occasion. The resilient Villasenor did not fold but failed to get any offensive pressure going in his favor. Souza built an insurmountable lead with his grappling, along with well-timed strikes in the stand-up game.

Entering the third period, Villasenor knew he needed a finish to win. He shut down a tiring Souza’s takedowns early in the round, but his fate was sealed when the Brazilian dragged him to the floor two minutes into the final stanza. Villasenor returned to his feet briefly, but Jacare planted him again, dashing his hopes for a comeback.

Brazilian jiu-jitsu phenom Roger Gracie, the latest crossover from the art’s first family, choked former UFC champion Kevin Randleman unconscious in the second round of their light heavyweight fight. The end came 4:10 into round two.

“Every Gracie that steps in the ring, it means a lot for the family,” Gracie said. “We’re here to represent them. That’s what we’re here for.”

It was not a surprising outcome, but the manner in which Gracie brought the fight to the ground was quite unexpected. After a lackluster first round full of uninspiring strikes, Gracie dropped Randleman with a knee midway through the second frame.

After the knockdown, Gracie pounced on his dazed foe, mounted him and began looking for a fight-ending submission. He moved into position to secure an armbar, but Randleman scrambled free for a moment. His freedom was short-lived, however, as Gracie took his back and cinched a figure-four body lock.

From there, he patiently worked to snake his arm under Randleman’s chin for a choke. The former Ohio State University wrestling standout fought the choke for more than a minute but finally succumbed. Randleman tapped out and then lost consciousness. Afterward, Gracie covered his deliberate approach.

“I think that’s the secret for every fight,” he said. “A fighter has to fight with his mind, not with his body or physique. I’m a very patient person, so I always wait for the right moment; then, I get it.” 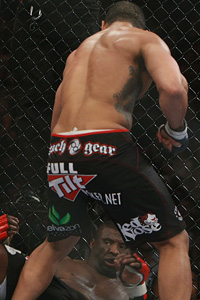 Rafael “Feijao” Cavalcante moved his name to the top of the list of contenders for Muhammed Lawal’s Strikeforce light heavyweight championship with a first-round knockout against Antwain Britt.

“Feijao” overcame being wobbled midway through the opening frame and scored the knockout 3:45 into period. Britt clobbered Cavalcante with a heavy right hand that sent him careening backwards into the cage, but the Brazilian regained his wits in the clinch.

After a pause in the action forced a restart by referee Al Wichgers, Feijao stormed forward with a kick to the body and backed it with a clubbing right hand that knocked Britt off balance. He followed with a left hook and right uppercut, but the major damage was done with a subsequent right cross that put down Britt. Wichgers jumped in to save Britt, who was grasping in vain at Cavalcante’s leg.

Undefeated lightweight Lyle Beerbohm sprang a mild upset over former top five lightweight Vitor “Shaolin” Ribeiro in a slow-paced three-round tilt that may have determined the next challenger for Strikeforce champion Gilbert Melendez. Beerbohm used a grinding style that negated Ribeiro’s highly regarded grappling game, as he eked out a split decision -- 30-27, 30-27, 28-29.

A reformed methamphetamine addict who emerged from prison in search of a mixed martial arts career, Beerbohm ran his perfect record to 14-0 with the victory. The fight was highly competitive, and both men felt they had won when the final bell sounded.

Ribeiro dominated the second period with a chain of submission attempts that had Beerbohm scrambling for survival. Beerbohm seemed to take the third round on the strength of his takedowns and top control. The opening period was completely devoid of action, as Beerbohm continuously worked for a takedown but failed to secure one.