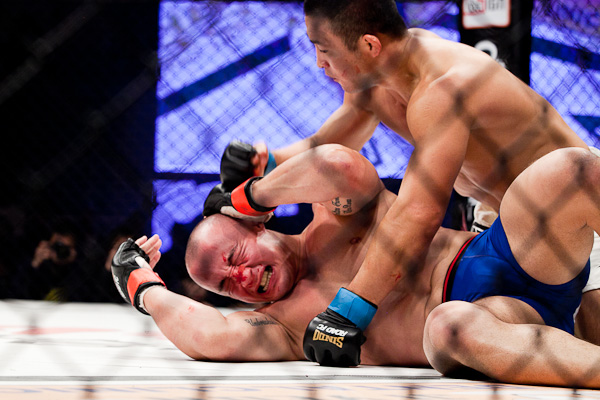 
SEOUL, South Korea -- On Saturday, at Road FC 5 “Night of Champions," Denis Kang returned to where it all began, at least the juggernaut portion of his career that culminated in his epic run in the Pride Fighting Championships 2006 Middleweight Grand Prix.

Jang Chung Gymnasium in Seoul, South Korea, was once home court to his reign as Spirit MC Heavyweight Champion, but also the scene of the K-1 Hero’s knockout loss to Yoshihiro Akiyama that seemed to dampen his momentum. Jang Chung Gymnasium is practically the house that Kang built, at least in the first decade of this millennium. Most people who can read and write in Hangul recognize this simple equation: As goes the career of Denis Kang, so goes the attendance at live MMA events in South Korea.

His opponent in the fan-friendly Korea versus Japan match-up was Shungo Oyama, a 10-13 fighter with one of the most ridiculous MMA resumes east of Jeremy Horn. Oyama’s list of opponents is a who’s who from the glory days of Pride, showing Wanderlei Silva, Dan Henderson, Mirko Filipovic and Melvin Manhoef (twice) in the loss column; Peter Aerts and former UFC champ Carlos Newton in the “win” column; and a record of 1-1 against people with the last name “Gracie.”

Kang scored early in the contest with measured boxing and a successful takedown that enabled him to take Oyama’s back and begin working for the rear-naked choke. Oyama endured and scrambled, however, and Kang soon found himself reversed from a high position and defending strikes from guard. In the ensuing exchange, Oyama landed repeatedly, sometimes to the back of the head, as Kang slowly lost his ability to defend over the course of the next thirty seconds. With less than a minute left in the round, Kang turned turtle, only to absorb continued pounding and the variety of knees to a grounded opponent -- legal in Road FC -- that also sealed his fate in a light heavyweight matchup against Sung Bae Whi at Road FC 3. This time the end came for Kang at 4:30 of the first round, via TKO.

“I’ve wanted to fight Denis Kang for a long time,” Oyama stated after the fight, “not because I disrespect him, but because he is famous and because I’ve learned a lot from watching him fight. I’m here to win the tournament, get my career back on track fighting in Korea, and serve as some small inspiration for the Japanese people who have been through so much lately. This is just the start.”

The second middleweight tournament match between M-1 veteran Jong Dae Kim and Daegu MMA representative Dool Hee Lee was a blink-and-you’ll-miss-it affair. This contest began with a flurry of hooks as Lee immediately dropped Kim into the position of a defensive double leg shot. But Kim recovered to his feet and answered with a glancing right followed by a left hook that connected right on the button. The flash knockout rendered Lee unconscious just 18 seconds into the first round.

As it stands, the middleweight tournament semifinal draw consists of Oyama and Kim advancing after their wins on Saturday, with Eun Soo “Heavy Metal” Lee and Hae Suk Son rounding out the card. Individual matchups have yet to be announced.

At lightweight, a contest between former Spirit MC welterweight champ Yui Chul Nam and South African striking specialist Vuyisile Colossa went the distance, despite expectations to the contrary. In the first round, Nam deviated from his trademark brawling style to neutralize Colossa’s obvious standup advantage with a calculated mix of light-handed combinations and successful double-leg takedowns. It was more of the same in the second, as Nam countered the clinch work and knees from Colossa with a late takedown that terminated in back control and a rear-naked choke attempt at the bell. Not known as a grappler, it was a well-implemented game plan of lay-and-pray wrestling that served Nam through the third frame and earned him the decision win.

In another featured lightweight match, dirty boxing, three takedowns and four solid overhand rights were enough for Team Posse fighter Jae Sun Lee to earn the unanimous 30-27 decision from Japanese journeyman Akihiko Mori, who spent much of the second and third rounds throwing jabs, low kicks and non-committal 1-2 combinations like a man who thought he was ahead on points.