The Nevada State Athletic Commission on Tuesday suspended welterweight contender Karo Parisyan for nine months, fined him $32,000 and ruled his split decision victory against Dong Hyun Kim a no decision in wake of a positive test for three banned painkillers at UFC 94 “St. Pierre vs. Penn 2” in January.

The penalties -- he will also be forced to submit to random testing during his suspension -- were levied against Parisyan at an NSAC hearing in Las Vegas. The 26-year-old judoka, who has a well-chronicled history of panic attacks, was flagged for suspected use of Hydrocodone, Hydromorphone and Oxymorphone.


Advertisement
Parisyan (18-5, 1 ND) eked out a split decision against the previously unbeaten Kim in one of the featured bouts at UFC 94. Had it stood, the win would have marked his first in more than a year. Despite the result of the match being overturned, Parisyan was not forced to forfeit the $40,000 win bonus he received. The NSAC instead elected to impose a 40-percent fine on the entire $80,000 purse he was awarded but warned future violators that their win bonuses would be subject to forfeiture.

Parisyan, who was not represented by legal counsel at the hearing, pleaded for leniency before the commission after he admitted his guilt.

“This is my only form of income,” Parisyan said. “If I don’t fight, I’m nothing. I’m very, very sorry. It was completely unintentional. This is embarrassing for me.”

According to Parisyan, he was put on a prescription painkiller because of a torn hamstring he suffered while training for a title fight against Matt Hughes in 2005. The injury forced him out of the UFC 56 match and has never been repaired, as evidenced by the deformed muscle visible on the back of his leg. Parisyan claims it has continued to cause him pain in the three years since. 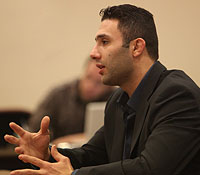 Dave Mandel/Sherdog.com
Karo Parisyan pleads his
case to the NSAC.
However, prior to the Kim fight at UFC 94, Parisyan ingested two pain pills -- later identified as Percocet -- he received from a friend, who had assured him they were the same as what he had been prescribed. Evidently, they were not. His levels of Hydromorphone and Oxymorphone -- the two drugs for which he has no prescriptions -- were described as “very high.”

“I trust the guy,” Parisyan said. “He’s a friend of mine. He’s got a chronic disease. He gave me the pills and told me they were the same exact thing. That’s why I took them.”

What’s more, Parisyan failed to disclose his use of painkillers, prescribed or otherwise, on a pre-fight questionnaire. Only after the fight did he inform an NSAC inspector.

“All I was concerned about was the fight,” Parisyan said. “I hadn’t fought in a year. My mind was calm [after the fight]. When I saw the urine test, I thought, ‘Oh, my God.’ [The inspector] told me as long it wasn’t an anabolic drug that would have given me advantage or a drug like cocaine or something, I should be fine. I had my doctor fax in the prescription, and a week later, everything blew up.”

Commissioner John Bailey reacted sternly to Parisyan, both for his use of pain pills that had not been prescribed and his failure to disclose use on the questionnaire.

“[The commission has] to know what’s going on with you,” Bailey said. “You just decided to not be truthful on a pre-fight questionnaire. We can’t have fighters drifting in and out of reality.”

Editor's Note: Parisyan's fine was reported incorrectly at $24,000 in the original story. It was corrected at 2:26 PM ET.
Related Articles
Latest News
ALLUFCBELLATORPFLONE