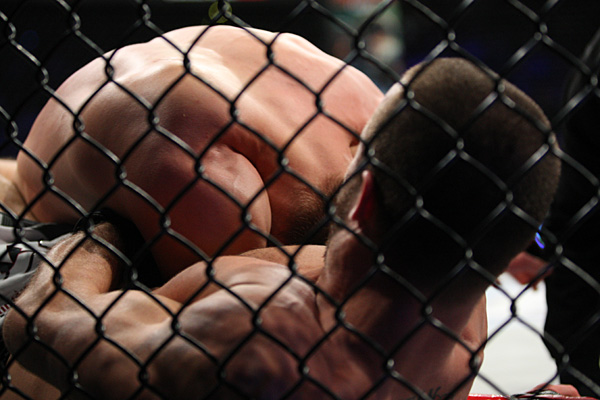 Curran rendered Shamhalaev unconscious with a first-round guillotine choke, as he retained the Bellator MMA featherweight championship with a technical submission in the Bellator 95 main event on Thursday at the Revel Resort and Casino in Atlantic City, N.J. Shamhalaev (12-2-1, 3-1 Bellator MMA) went limp 2:38 into round one.

“I didn’t get hit once in the face,” Curran said. “I wanted to get in, get out, get back to the gym and rest up; on to the next one. Everyone coming up in the tournament has a lot of skills and huge talent.”

After a brief feeling-out process, Curran (19-4, 9-1 Bellator MMA) moved in for a sneaky takedown and caught an arm-in guillotine as Shamhalaev attempted to counter. The 29-year-old Russian fought valiantly to escape the choke but blacked out within the champion’s clutches. The defeat snaps Shamhalaev’s streak of six consecutive wins. Photo: K. Mills/Sherdog.com
Frodo outpointed Richman in a close one.
Unfettered aggression, takedowns and heavy power punches and kicks spurred the surging Magomedrasul Khasbulaev to a unanimous decision over Mike Richman in the Bellator Season 8 featherweight tournament final. All three judges arrived at the same verdict: 30-27 for Khasbulaev (21-5, 5-0 Bellator MMA).

The win, Khasbulaev’s ninth straight, brought him a $100,000 paycheck and a shot at the Bellator featherweight championship.

Richman (15-3, 4-2 Bellator MMA) had his moments, opening cuts near both of the Russian’s eyes in the second round. However, he had no answer for Khasbulaev’s relentless pressure and multi-pronged standup offensive. The 26-year-old sealed his latest triumph with a pair of takedowns and timely ground-and-pound in round three. The two finalists staggered one another during their initial exchange. Cooper (19-8, 6-3 Bellator MMA) mixed in a pair of takedowns but failed to keep “The Rhino” grounded and neutralized. After Marshall rose to his feet for a second time, he created some separation with a short elbow and then leveled Cooper with a right hook. Marshall dropped the finishing blow on the defenseless Cooper, hovered over his fallen foe with arms outstretched and left no doubt regarding the stoppage.

“If I catch you with the right hand, you’re going to sleep,” Marshall said. “Man, I hope he’s OK. I was trying to knock his beard off, but it didn’t come off. Maybe next time.” Photo: K. Mills/Sherdog.com
Hawn left Parisyan dazed and confused.
Olympic judoka Rick Hawn wiped out Ultimate Fighting Championship veteran Karo Parisyan with a searing overhand right and follow-up punches in the second round of their welterweight showcase. Parisyan (22-10, 0-1 Bellator MMA) met his end 1:55 into round two, his modest two-fight winning streak a thing of the past.

After the two men battled to a stalemate in the first round, Hawn (15-2, 7-2 Bellator MMA) came out firing in the second. The 36-year-old Tristar Gym representative wobbled Parisyan with an overhand right, followed it with a series of uppercuts and finished it with hammerfists.

“I wasn’t trying to look for [my right hand] the whole time,” Hawn said. “I knew that he knew I was waiting for that, so I had to wait until the second round to mix things up. [He is] a good judo guy. I felt him in the clinch, and I remember him from back in the old days. He’s good, so I had to be careful.”


A punishing clinch game carried former Bellator champion Lyman Good to his fourth win in five appearances, as he recorded a unanimous decision over Dante Rivera in a grueling welterweight match. All three cageside judges scored it for Good (15-3, 8-3 Bellator MMA): 30-27, 30-27 and 29-28.

Good drew “The Ultimate Fighter” Season 7 alum into close quarters throughout the 15-minute battle, attacking him with short punches, knees and even a second-round takedown. Rivera (15-7, 0-1 Bellator MMA) tried in vain to answer but found himself outgunned against a bigger, stronger man.