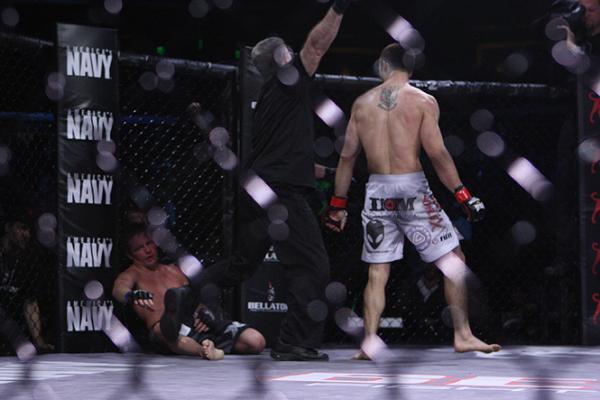 Joe Warren had to be helped out of the cage -- without his Bellator Fighting Championships featherweight crown.

Pat Curran dethroned Warren by brutal third-round knockout and captured the 145-pound title in the Bellator 60 main event on Friday at The Venue at Horseshoe Casino in Hammond, Ind. Their encounter ended on a horrific volley of knees and punches, with the former champion unconscious in a seated position at the base of the cage. At one point, Warren seemed to turn away from the onslaught in an outward sign of submission, but referee Jeff Malott allowed it to continue until he had been knocked cold 1:25 into round three.

“I wanted to wait, take my time and wait for openings,” Curran said, as cageside personnel tended to his fallen opponent behind him. “It’s a dream come true, and it’s only the beginning.”

Curran nearly finished it in the first round, as he had Warren badly hurt with a head kick and follow-up blows. The former Greco-Roman wrestling world champion weathered the storm and carried the bout in to the second round. There, Warren seemed to find himself, as he scored with takedowns and opened a small cut under Curran’s right eye. Alas, round three brought with it unsettling violence.

The challenger cracked Warren with a knee to the head, backed him into the cage and let loose with a hellacious barrage of punches and knees. Warren was clearly out on his feet more than once but was left to absorb further punishment. Curran did not let up until the job was done and the title was his. The 24-year-old has won his last four fights, the last two of them by knockout, and expects to face Patricio Freire in his first title defense.

“I just got this belt,” Curran said, “and I don’t plan on getting rid of it anytime soon.” 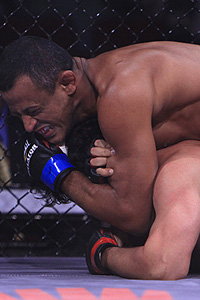 D. Mandel
Sandro floored and finished Vargas.
Former Sengoku champion and reigning featherweight King of Pancrase Marlon Sandro submitted Roberto Vargas with a first-round rear-naked choke in the quarterfinal round of the Bellator Season 6 featherweight tournament. Vargas tapped out 3:35 into round one.

Sandro (21-3, 4-1 BFC) showed off some of the killer instinct that made him a star in Japan. The 35-year-old Brazilian jiu-jitsu black belt stuck Vargas with repeated multi-punch combinations, punctuated by straight rights, overhand rights and right uppercuts. Vargas (12-2, 1-2 BFC) did his best to remain upright but ultimately collapsed under the barrage. Once on the ground, Sandro closed it out with little resistance. He moved to the Millennia MMA representative’s back, flattened out Vargas and locked down the choke.

“I’m very happy,” Sandro said. “I train hard every day. I want to be the champion here.” 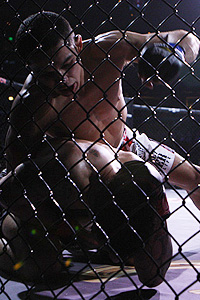 D. Mandel
Bezerra tapped out Foster.
Alexandre Bezerra has his foot planted firmly on the accelerator.

Bezerra submitted Team Bombsquad’s Kenny Foster with a second-round rear-naked choke at 4:57 into round two, sending Bezerra (13-1, 5-0 BFC) to the semifinals with his ninth consecutive victory.

Unbeaten in five Bellator appearances, Bezerra established his superiority in the first round with a takedown, some solid clinch work and kicks that seemed to increase with intensity as the battle unfolded. Foster enjoyed far more success in the second round, as he held his own in the standup and briefly seized back control on the 24-year-old Brazilian. However, Bezerra capitalized on an ill-advised takedown attempt from Foster (9-6, 2-3 BFC), snatched a guillotine choke and moved into top position. He attacked with ground-and-pound, forced his foe to surrender his back and cinched the choke for the finish.

Foster has lost four fights in a row, three of them by choke-induced tapout. 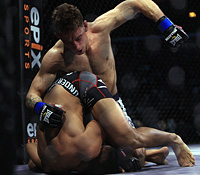 D. Mandel
Corey outpointed Mann.
Takedowns and a ruthless top game carried Team Curran’s Mike Corey to a unanimous decision over Sengoku veteran Ronnie Man in the Bellator Season 6 featherweight tournament quarterfinals. All three cageside judges scored it the same: 29-28 for Corey (12-2-1, 1-0-1 BFC), who has not been defeated in nearly five years.

“I feel awesome,” Corey said. “It’s just going to get harder, but this is what I’m here to do.”

Mann (21-5-1, 3-2 BFC) was impressive out of the gate, as he floored the 27-year-old Marine with a pair of blistering right hands. Corey gathered himself on the ground, returned to his feet and struck for a late takedown that served as a precursor
for what was to come.

In the second round, Corey scored with another takedown, kept Mann pinned to the canvas and brought his ground-and-pound into play; punches and hammerfists to the head and knees to the body were his weapons of choice. The scene repeated itself to a greater extent in round three, as Corey trapped Mann on the ground for nearly four minutes and cruised into the semifinals. 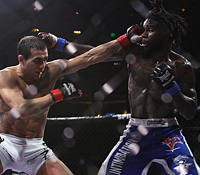 Straus took advantage of his size and strength, as he bullied his smaller foe and denied his advances in the clinch. Spoon (12-1, 2-1 BFC) was outgunned on the outside, as Straus laced his legs with repeated kicks and tagged him with one straight left hand after another. The Team Vision representative also scored with takedowns in the first and second rounds and spent much of the 15-minute encounter as the aggressor. 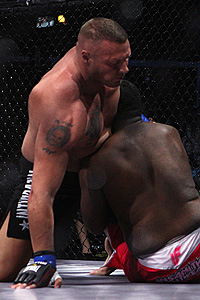 D. Mandel
McCorkle stopped White.
“Jeremy’s a really, really tough dude,” Straus said. “I just try to do my best out there.”


UFC veteran Sean McCorkle needed a little more than a minute to submit journeyman Richard White with a first-round neck crank in their preliminary catchweight affair. White (15-13, 0-1 BFC), who has lost four fights in a row and eight of his last nine, tapped out 62 seconds into round one.

McCorkle (16-2, 1-0 BFC) got down to business in a hurry. The 35-year-old backed up some punches with a takedown, passed to half guard and isolated one of White’s arms. He then transitioned to the neck crank for the finish. McCorkle has posted six consecutive wins since being released by the Ultimate Fighting Championship following back-to-back defeats to Stefan Struve and Christian Morecraft. 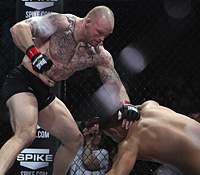 D. Mandel
Wiuff bested Gomez.
UFC and Pride Fighting Championships veteran Travis Wiuff recorded the 66th win of his professional career, as he posted a unanimous decision against Anthony Gomez in a preliminary catchweight bout. All three cageside judges scored it the same: 29-28 for Wiuff (66-14, 2-0 BFC).

Takedowns were the story, as Wiuff grounded Gomez (5-2, 0-1 BFC) repeatedly throughout the 15-minute battle. The 33-year-old Minnesotan struck for takedowns in all three rounds, many of them from the clinch, and pushed his current winning streak to four fights. 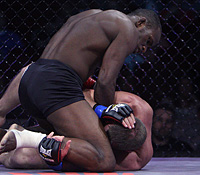 D. Mandel
Da Silva took Reardanz out.
Renovacao Fight Team representative Genair da Silva stopped Bobby Reardanz on third-round leg kicks and follow-up punches in a preliminary catchweight tilt. Da Silva (12-4, 2-1 BFC), who was removed from the Season 6 featherweight tournament on the eve of the event for his failure to meet his contracted weight, closed out the King of the Cage veteran 59 seconds into round three.

From the start, it was clear da Silva was the superior fighter. He worked over Reardanz (8-11, 0-1 BFC) in the clinch, mixed in a pair of attempted chokes and assaulted him with kicks to the head, body and legs. Round two was particularly one-sided and set the stage for the finish. Da Silva has won seven of his last eight bouts. 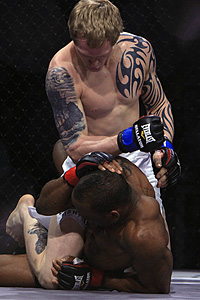 Shockley (9-1, 2-1 BFC) struck for a slam takedown in the first round, moved to mount and ultimately transitioned to Bailey’s back. On the ground, he unleashed some elbows and had Bailey searching for answers. None came. The scene repeated itself in round three, as Shockley again scored with takedowns on an opponent known for his wrestling, maintained top position and scored with strikes from half guard. 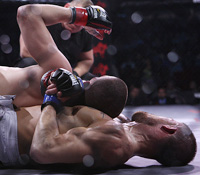 Nauracy (1-0, 1-0 BFC), a protégé of former WEC champion Miguel Torres, floored Galloway in the first round and capitalized on a mistake in the second. There, he moved into top position after Galloway slipped on a head kick, eventually moved to his back, hooks in, and cinched the choke for the finish.