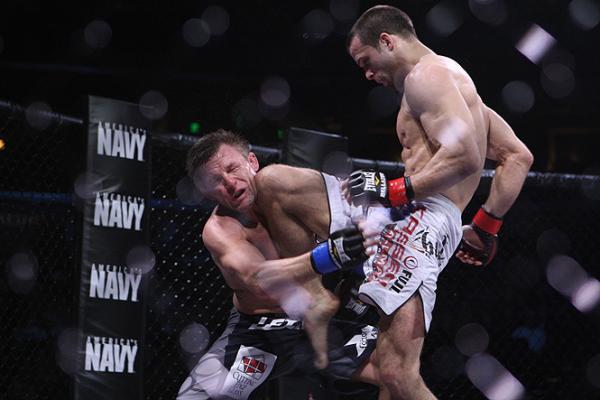 Pat Curran won the Bellator featherweight title Friday, but he believes the bout should have been stopped sooner.

The finish came 1:25 into the third round. After stunning Warren with a knee, Curran battered him against the cage with punches and more knees. Referee Jeff Malott allowed the beating to continue even though Warren appeared out on his feet.

“He definitely could have stopped it 10, 15 seconds sooner,” Curran told the Sherdog Radio Network’s “Savage Dog Show.” “There’s no reason anybody should take that much damage. That’s why the ref’s there, to step in when a fighter can’t properly defend himself. I just hope Joe didn’t suffer any serious injuries and he has a quick recovery.”

Although the sustained punishment Warren took may have overshadowed Curran’s performance somewhat, it’s hard to deny that the 24-year-old has become one of the top featherweights in the world. He has won four straight and eight out of nine, losing only a unanimous decision to Eddie Alvarez at 155 pounds. After that loss he dropped to 145 pounds and won the Bellator 2011 Summer Series featherweight tournament.

“Ever since the last loss against Eddie Alvarez, I took that as a learning experience,” Curran said. “I went back to the gym and fixed my mistakes. I just was really confident and happy moving back down to 145. The biggest thing was just the confidence. I wanted to run through the tournament and I did. I always knew that once I had that second opportunity to become champion, I wasn’t going to let that pass me by.”

Next up he’s expected to defend his title against Patricio Freire, who won the featherweight tournament in Bellator’s fourth season. A broken hand prevented the Brazilian from challenging Warren for the belt, but Curran thinks he’ll meet “Pitbull” in the cage this summer or fall, when both are healthy.

“I did injure my ankle early in the first round in the fight with Warren,” Curran said. “I’m going to get that checked out [Tuesday], and hopefully it’s nothing too serious, but I’m pretty sure I’ve torn something in my ankle. It’s shifting and moving around. I get to find out later in the week how serious the injury is. If I need surgery, I’m going to be out for a couple of months and need the recovery time. It all depends on how my ankle’s doing.”