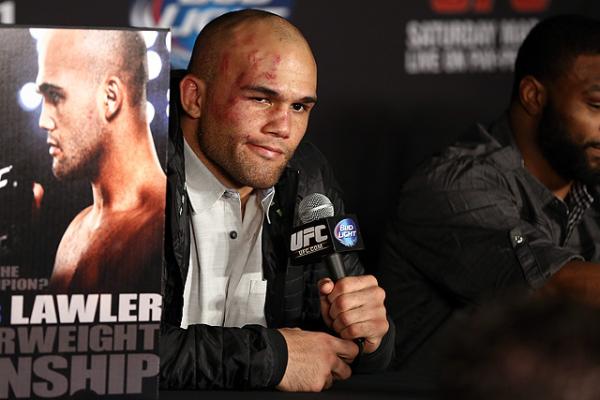 He doesn’t anymore, but the former UFC champion and current fight analyst with AXS TV was rooting for Lawler Saturday when he dropped a unanimous decision against Johny Hendricks in the UFC 171 main event.

Coming off the bout, Miletich joined the Sherdog Radio Network’s “Rewind” show to discuss how things unfolded and much more.

On the fight: “I thought the fight was very close. I thought it was really to the point it could have gone either way, but Johny just stayed a little bit busier and was able to win that fight. I wasn’t 100-percent sure that Rob was behind on the cards, but you know how it is when you’re partial to somebody -- you can have a skewed view, I guess.”

On Lawler’s performance: “I saw the Rob Lawler that matured, who didn’t get wild, who kept his composure, who used technique, and that’s the guy I’ve seen for the past four fights. He has continually matured. When you look five fights ago, six fights ago, that’s when Rob had the asthma still. Eight fights ago, nine fights ago he still had the asthma. I’m convinced that Rob will wear that belt. Not yet, but I think it’s coming.”

On Hendricks’ standup: “Here’s what he showed last night against Rob. It was that he could stand in the pocket and bang for five rounds with [an opponent] who is a true world-class striker [and has] serious power in terms of boxing skills in MMA. I don’t think Johny necessarily won that portion of it, in my mind. Technically Robbie looked very composed and smoother technically, but Johny showed that he can do it and do it well. That’s something that was pretty impressive actually.”

On what else Hendricks showed: “I think all I saw was that Johny was a world-class wrestler with sick power who had an iron chin. You could just see with Johny, he laughs at guys. He laughs at world-class guys and intimidates them and beats the s--t out of them. He wasn’t able to do that with Rob and he wasn’t able to intimidate Rob and certainly wasn’t able to just walk through his power like he’s done with other guys, but there’s something about Johny skillset-wise and attitude- and mentality-wise that you see going places.”

On Hendricks’ kicks and why Lawler doesn’t check kicks: “With Rob, I asked him when I was still training him, I said, ‘Why aren’t you checking kicks? What’s going on? Why aren’t you doing that?’ He goes, ‘Because they don’t hurt. I don’t care about it.’ So that’s kind of his mentality. He’ll wake up the next day and have a sore leg, but he just flat out just doesn’t care that people are throwing them.”

On Lawler picking his shots: “That’s kind of the way that you’d like to do it, to be honest with you, but I would have liked to have seen him mix it up maybe a little bit more in terms of even if you don’t get a takedown, hit a takedown, just for the sheer fact that you’ll make the guy think you’re changing levels, to open him up more. I think in that kind of fight -- that was a stand-in-the-pocket type of fight. Both guys were used to the punishment. Their jaws were warmed up, so to speak. Their necks were warmed up, so to speak. It was going to be tough for either one of them at that point to get hurt.”

On Lawler’s flurry in the third round: “I was certainly on my feet, I can tell you that. Robbie’s getting ready to put him away, I thought, but God. How many times has Hendricks been down on points in a wrestling match? How many times has that guy sucked it up and beat people? You know? Look at Rob against Melvin Manhoef. People thought, ‘Oh s--t, he’s getting killed.’ These guys are champs, both of them. But again, I really was feeling pretty good that Rob was going to be able to put him away. Even though he didn’t put him away in the third, I thought he was going to be able to before the fight was over.”

Listen to the full interview (beginning at :25).