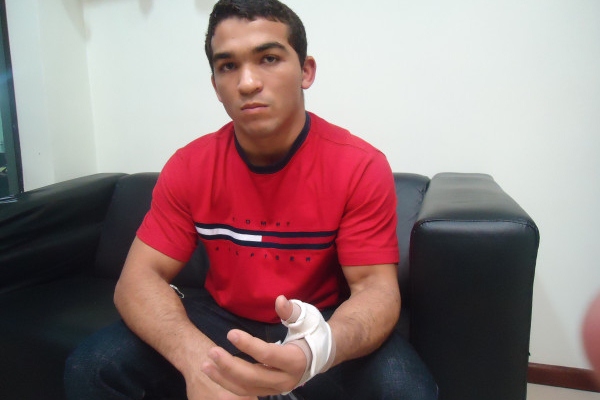 Patricio Freire’s rematch with Joe Warren will have to wait. | Photo: P. Freire


Patricio “Pitbull” Freire has suffered a broken left hand and will be unable to challenge Joe Warren for the Bellator Fighting Championships featherweight title on July 23 as originally anticipated.

Bellator CEO Bjorn Rebney announced the injury Tuesday, and the fighter posted a picture of the broken hand to his Twitter account shortly thereafter. According to Freire’s translator, Matheus Aquino, a “grip test” conducted Saturday found that Freire could exert 100 pounds of pressure with his right hand and only 10 pounds with his injured left.

“Now that Bellator made it official, it’s true,” Freire wrote on Twitter. “I won’t be able to fight Warren this month. Saturday, I heard it will take me four months to be able to fight again. I’m already focusing on recovering as fast as I can so I can have my shot at the belt.”

Scheduled to headline the promotion’s Canadian debut at Bellator 47, the title bout will now be rescheduled. Warren will participate in the promotion’s upcoming fifth-season bantamweight tournament, and the contest will likely take place after that bracket plays out.

Warren and Freire have met once before, in the final of Bellator’s second-season featherweight tournament. The American walked away that night with a split decision victory, earning the tournament title in the process. Warren would go on to knock out reigning featherweight champ Joe Soto to capture Bellator’s 145-pound belt. The self-professed “Baddest Man on the Planet” has yet to defend his title since winning it from Soto in September 2010. Warren has won his last five contests, sporting a perfect 5-0 record in the Bellator cage.

Freire earned the right to challenge Warren by winning Bellator’s most recent featherweight tourney with three impressive performances this past spring. First, the Brazilian swarmed Georgi Karakhanyan at Bellator 37 in March, earning a third-round TKO over the Armenian. In the semifinals at Bellator 41, Freire sent countryman Wilson Reis packing with a vicious punch combination. Freire captured the tournament crown one month later, outworking Daniel Straus at Bellator 45 on May 21 to earn his rematch with Warren.