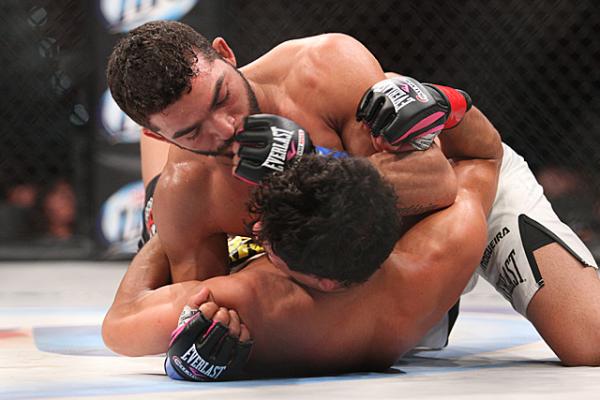 Patricio “Pitbull” Freire will get another shot at glory. | Photo: Keith Mills/Sherdog.com


Patricio Freire now stands just one victory away from another crack at the featherweight title after outpointing Fabricio de Assis Costa da Silva in the main event of Bellator 103.

“Pitbull” used a well-rounded approach to take a unanimous decision from “Guerreiro” at the Kansas Star Casino in Wichita, Kan., advancing to the finals of Bellator’s Season 9 featherweight tournament.

Da Silva did his best to take Freire to the mat multiple times throughout the contest, but the stocky former title challenger used a butterfly hook to turn the tables and land in top position each time. “Pitbull” briefly passed to mount twice in round one, but da Silva recovered his half-guard in both cases. Round two saw “Guerreiro” find some success on his feet, landing a clean right hand that caused the Season 4 tournament winner to backpedal. Freire would return fire later in the frame, however, as he stepped into range and cracked his countryman with several clean blows.

Freire also owned the fight’s final five minutes, reversing another takedown try and working with ground-and-pound from half guard. Though his lanky foe escaped to his feet, “Pitbull” quickly put him back down with a double-leg slam. In spite of da Silva’s aggressive attempts to land a big shot as the bout came to a close, Freire gained the favor of all three judges, earning scores of 30-27 across the board.

“It was hard work in the gym with my teammates,” Freire told commentator Jimmy Smith after his victory. “I’m very happy to be [in the finals] again.” 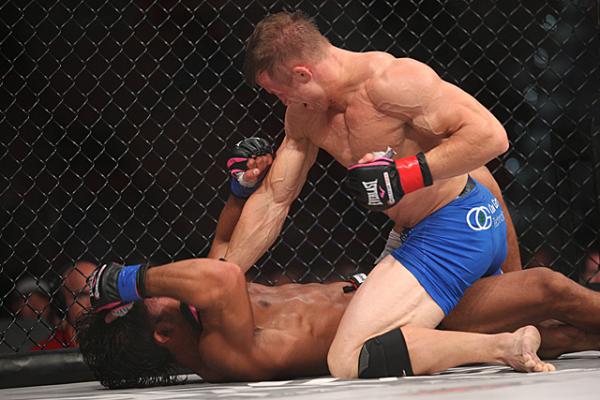 Though he would eventually find success on the mat, Wilcox struggled to score a takedown early in round one as Taimanglo did his best to land single shots on the outside. Midway through the frame, “The Silverback” managed to ground the Guamanian, a feat Wilcox repeated in the second stanza despite eating several clean left straights to start the period.

While Wilcox executed little in the way of ground-and-pound in the bout’s first 10 minutes, the muscular featherweight opened up his arsenal in round three, hitting a takedown early in the frame and continually connecting with punches from half-guard to secure a unanimous decision victory. 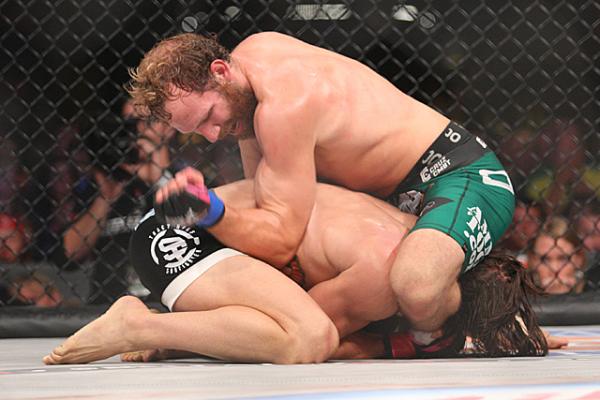 “The Caveman” swarmed his foe from close quarters in round one before hurting Ambrose with a knee to the head from the clinch. Rickels then scored a takedown and took his opponent’s back to close out the frame. Round two brought more success for the Season 8 tournament winner, as Rickels dropped Ambrose with a round kick to the liver midway through the frame.

Though a game “Superman” survived his opponent’s powerful strikes and scored multiple takedowns throughout the final two rounds, Ambrose could do little within the guard of Rickels, who brought the contest to a close 2:37 into the third round after locking up an inverted triangle as Ambrose drove for a takedown. Rickels did not fight to find his squeeze, however, instead using the position to hold Ambrose in place as he blasted his unprotected ribs with the powerful, unanswered punches that forced referee John McCarthy to wave off the bout.

“As soon as I touched him with a couple punches, I knew I was going to keep building,” said Rickels. “Once I hurt him the first time, it was over from there. I felt a lot of his energy fade away. This is the road to redemption, “Caveman” style. I want to put beatings like this on everybody in this division. I believe I’m a top-10 fighter in the world, and I want to see my name on one of those [championship] banners.” 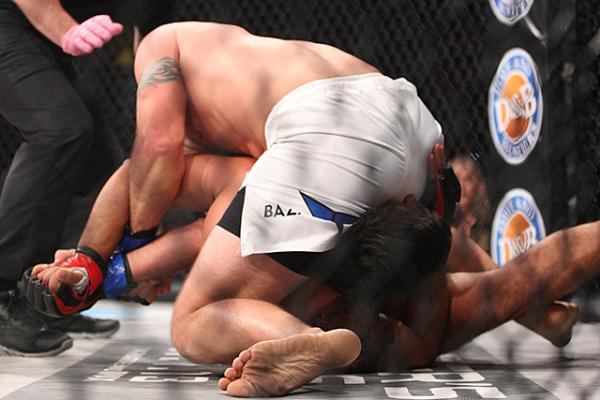 Just moments into the bout, Zayats slipped under a punch combination to score an outside trip near the fence, landing in side control. From there, the Season 8 tournament finalist secured a figure-four wristlock on the left arm of “Big Red” before wrenching the appendage behind Rosa’s back in a fight-ending kimura. 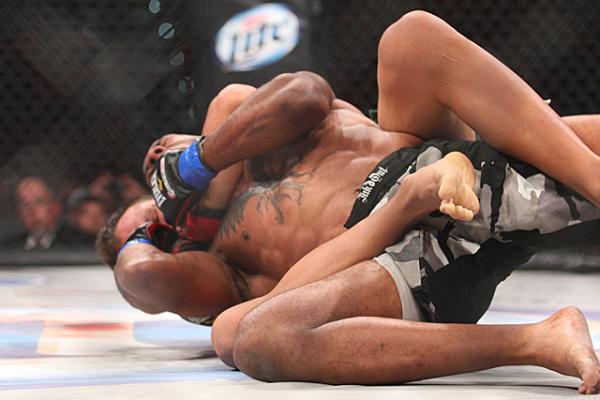 Photo: K. Mills/Sherdog.com
Eduardo tapped Carter after an early scare.
Carlos Eduardo extended his winning streak to eight fights to close out the evening’s preliminary card, surviving an early knockdown to score a sweep and finish Wayman Carter with a rear-naked choke in just over two minutes. Just prior, lightweight Remy Bussieres kept his perfect professional record intact in his duel with Blake Pool, as the French Canadian was awarded a unanimous decision over the American following 15 minutes of action. Bellator heavyweight debutant Maurice Jackson scored a 52-second technical knockout of Matt Uhde, opening a serious laceration on Uhde’s skull with a head kick that forced the cageside doctor to halt the bout.

Earlier, Donnie Bell wasted no time in taking the longer Marcio Navarro to the canvas, bludgeoning him with elbows from side control before transitioning to the back and forcing Navarro to submit to rear neck crank. Jeimeson Saudino was awarded a split decision win over Jesse Thornton in their three-round bantamweight affair, and Ricky Musgrave dominated Cody Carrillo in the evening’s opening contest, flooring him with a sharp combination before cranking a kimura and forcing Carrillo to submit at 2:59 of round one.