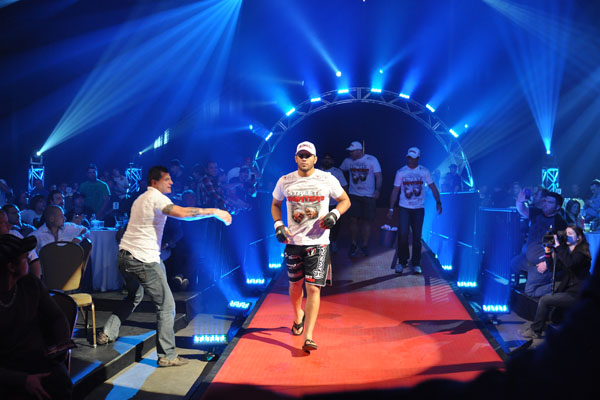 Stephan Bonnar did his best to hurt Anderson Silva on Saturday at UFC 153, but he didn’t really come close before the UFC middleweight champion put him away in the opening round.

The win was Silva’s 16th in the UFC. His eighth came against Patrick Cote, who recently joined the Sherdog Radio Network’s “Rewind” show to discuss what it’s like to be in the Octagon with the sport’s pound-for-pound king.

“It’s very complicated to fight this guy because you never know what’s going to happen or what he’s going to do,” Cote said. “We saw what he did Saturday night. Once again he did something new. He was staying against the fence and he was playing with Bonnar. Bonnar is no joke. Bonnar is a good fighter. He’s tough. He’s durable, and [Silva] was playing with him like a little kid.”

Cote fought Silva in October 2008 at UFC 90. He made it into the third round before the fight was stopped when he tore his ACL.

“It’s hard to explain how to fight him,” Cote said, “because if you go forward, he’s behind you. You try to hit him, and he’s not there. It’s very, very weird.”

Lasting 10-plus minutes with the Brazilian is a feat in itself, though Cote wasn’t able to do much damage. Few have.

“It’s hard to hit him very clean with a very powerful shot,” Cote said. “That’s why it’s hard to punch him very, very hard, because he’s moving so fast and he’s playing with the angles very, very well.”

Silva has also been known to play with his opponents. He’ll drop his hands and invite an attack, only to dodge whatever is thrown at him.

“You have to stay on your game plan,” Cote said when asked what to do when Silva starts playing in the cage. “It’s very, very hard. I remember [against] me, he was playing with his hands. He was doing some crazy footwork, like the new Bruce Lee or something like that, but I would stay on my game plan, but that was very, very hard for me because I like to go forward. I like to push the pace, but at the time, I knew that was exactly what he wanted.”

At one point Saturday, Silva not only dropped his guard but actually allowed Bonnar to hit him. Cote believes Bonnar hesitated to commit full power to those shots, thinking he might leave himself exposed. Still, Bonnar did land, and Silva didn’t seem fazed.

“I think he’s very, very confident about himself and he thinks that he’s unbeatable,” Cote said of Silva. “He thinks that nobody can beat him, nobody can hurt him. Saturday night he received an elbow right in the face. He received a right cross right in his face and he was standing there and he was talking to his cornerman … . He was like, ‘All right, calm down, guys. I know what I’m doing.’ He’s so in control about his game, so in control in his head. That’s why I think he’s so dangerous.”

As far as Silva’s own attack, Cote thinks it’s his accuracy that makes him so deadly.

“I received more [powerful] shots by other fighters in my career, but the accuracy is just insane,” Cote said. “He’s very accurate. He’s not throwing anything for nothing. Every time he throws something, it has a target. I think that’s why he’s so impressive -- he’s so accurate.”

The perfect example might have been Saturday, when Bonnar came off the cage and Silva planted a knee in his solar plexus. Bonnar dropped, and after a few follow-up punches, the fight was over.

Listen to the full interview (beginning at 1:46).