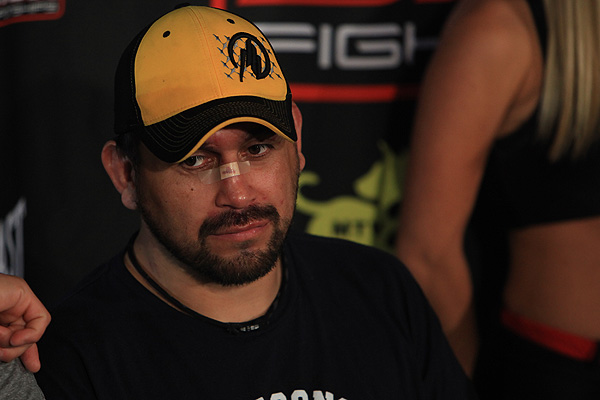 
At 39 years old, Paul Buentello did considerable work on his body to get down to the light heavyweight division. However, it was the work he did on James McSweeney's body that made his 205-pound debut a successful one Friday night in the main event of Legacy FC 22 from the Memorial Civic Center in Lubbock, Texas.

The initial surprise of the bout wasn't that McSweeney took early control but rather that the British kickboxer showed off what he's learned in Las Vegas with Robert Drysdale, taking Buentello's back and working diligently to find a choke for most of round one. The “Ultimate Fighter” Season 10 alum even went over Buentello's back into an armbar attempt, but the former UFC and Strikeforce heavyweight title challenger escaped and punished him to the body on the canvas.

The body work of “The Headhunter” paid immediate dividends. Though McSweeney landed kicking offense in the second round, the gut checking took its toll as “The Hammer” started huffing and puffing, finally shooting a lame double-leg takedown that Buentello easily defended. Buentello defended the takedown so forcefully, he basically shoved McSweeney across the cage onto his seat, then opened up with more ground-and-pound to the body from Ali-Inoki position. A crushing right hand to the body forced McSweeney to turn sideways in pain, giving referee Kerry Hatley his cue to halt the contest at 2:44 of the second.

Buentello was originally set to face Marcus Sursa in his 205-pound debut, but McSweeney entered the bout five weeks ago when Sursa was not approved as an opponent by the Texas Department of Licensing and Regulation. Buentello's first light-heavyweight win in his 16-year MMA career brings his mark to 33-15, while McSweeney falls to 11-11.

The sharp-striking Young dropped the iron-jawed Davila in round one and made good use of his clean, straight counterpunches throughout the contest. However, when the pace of the bout slowed, it was was Davila bulling forward with haymakers, driving “The Machine Gun” into the fence where he couldn't fire rounds. “Bighead” controlled Young inside and landed heavy shots here and there, but seemed to walk headlong into considerable clean punches from Young for much of the final round before tagging his man in a final, hard-swinging salvo before the last bell.

At 125 pounds, UFC veteran Joseph Sandoval caught an early scare from Plainview, Texas' Jonathan Lopez before righting the ship and getting the knockout in a must-win fight.

After starting 6-0 as a pro, Lubbock's Sandoval had lost four straight entering Friday night's contest, all via first-round stoppage in less than 80 seconds. Lopez claimed Sandoval's back early and spent most of the first round threatening with the rear-naked choke. However, Sandoval escaped late to score shots on Lopez, carrying his momentum into the second frame. The Bighead MMA rep started to unload heavy hooks until Lopez hit the ground and sealed the deal with vicious knees to the body and hammerfists on the canvas. Referee Jacob Montalvo rescued Lopez at 4:18 of the second frame.

Tye, Texas' Aaron Cerda hung tough to score an upset over George Pacurariu at 135 pounds. The 23-year-old Cerda was overwhelmed by the Romanian-born Pacurariu's grappling and ground-and-pound from the outset; when Cerda did get to top position, he was forced to fight out of submission attempts from the Octagon MMA product, including a tight armbar late in the second frame.

However, Cerda seized opportunity partway through the third, taking top position in a scramble and letting loose with a torrent of elbows that opened a series of cuts above Pacurariu's browline and forced the doctor to call a halt to the bout at 2:11 of the final frame.

The younger brother of co-main eventer Eric, Gino Davila, earned three 30-27 scores over in a workmanlike shutdown of flyweight Jon Voth. Davila's physical strength and wrestling were simply too much for Voth to handle, as the local fighter slammed his man to the mat at will, landed copious elbows and threatened with guillotine chokes for 15 minutes.

Lightweight Anselmo Luna overcame early adversity to win a unanimous decision (30-27, 30-27, 29-28) over Houston's Justin Reiswerg. “Wolverine” took Luna's back and nearly choked him out early, but the West Texan recouped to utilize his own grappling skills to get the nod.

In the evening's opening contest, Plainview's Eric Lunsford punched out George Trujillo in the first round.