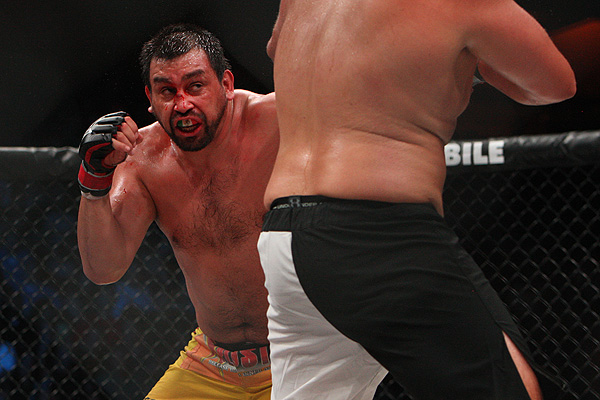 Though no venue has been announced for the show, the evening’s main draw will air live on AXS TV. In addition to the main event, the televised card will see 14-fight pro Artenas Young lock horns with seasoned veteran Eric Davila at welterweight, while UFC alum Damacio Page makes his sophomore promotional effort against a to-be-announced foe.

Buentello, 39, rides a three-fight winning streak into his Legacy debut, most recently defeating Latvian talent Igor Kostin on May 30 in Russia. Known for his punching power, Buentello challenged Andrei Arlovski for the UFC heavyweight title in 2005, suffering a 15-second knockout in the UFC 55 main event. The native Texan would later vie for the Strikeforce heavyweight championship in 2007, sustaining a second-round knockout at the hands of Alistair Overeem.

Sursa snapped a two-fight skid in his last outing, submitting WEC vet Eric Schambari with a triangle choke on April 27. The 30-year-old competed once for Bellator in 2010, when he was knocked out by onetime Octagon talent Eddie Sanchez. A 20-fight veteran, Sursa owns 11 of his 12 victories by way of stoppage and has gone the distance just three times in eight years as a pro.