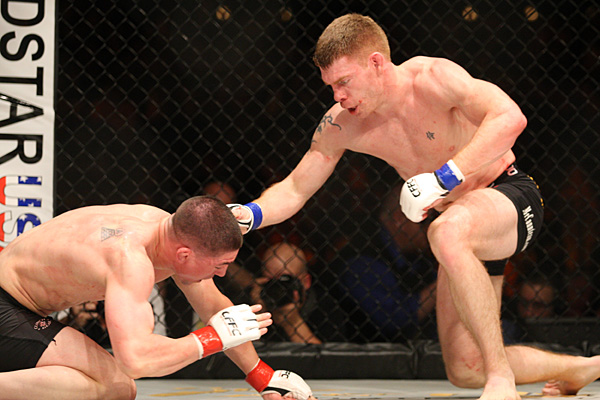 Before the bout, Felder said he wasn’t worried about Johnson’s wrestling game and he wasn’t going to be taken down. The words proved prophetic as Johnson tried time and again to take Felder down to no avail, paving the way for the highlight-reel knockout at 3:44 of the second round.

“That’s in my back pocket at all times,” Felder, now 8-0, told Sherdog.com after the bout. “All throughout this training camp I’ve been practicing that kick and I just saw his hands down, and he was slow and tired and I just went for it. I started thinking in the back of my head, ‘I know I’m hitting this guy and I’m landing shots.’ I started thinking if this starts creeping into the fifth round and he gets one or two takedowns ... I just knew he hasn’t fought the caliber of guys that I fought.”

It’s that caliber of opponent which has Felder thinking about the next step in his lightweight career.

“I want to be in the UFC. That’s the only reason I’m doing this. Me and Rob [Haydak, CFFC President] have a great relationship but he wants the same thing. He wants his guys to move on to the big show. If I have to keep fighting guys and defending the belt that’s fine.”

With former CFFC welterweight champ and now-UFC fighter George Sullivan in the crowd, Webb took Stittgen down whenever he wanted throughout the bout. Stittgen survived multiple rear-naked choke attempts but eventually took one flurry too many from the “Spyder” and referee Liam Kerrigan stopped the bout in favor of the Marlton, N.J.'s Webb at 4:52 in the 3rd round. Webb is now 7-0 with his capture of the CFFC 170-pound title.

“I remember in 2012 when I made my debut for CFFC, I was sitting in the corner and George Sullivan was in here about to fight for his CFFC welterweight championship. I remember looking at him and looking up to him and just happy that I’m in this spot and other 170-pounders are looking at me right now,” Webb told Sherdog after the contest.

In the first championship bout of the evening, Bellator veteran Alexandre Bezerra earned a majority decision (49-46, 48-47, 48-48) over previously-unbeaten Levan Makashvili in a high-stakes featherweight contest. What transpired was an example of exactly what experience against elite competition can do for a fighter: “Popo” stifled Makashvili's normally relentless offense consistently over five rounds, potshotting him and timing his takedowns expertly over 25 minutes. With the win, the 26-year-old Brazilian improves to 17-3.

After a less-than-stellar foray on “The Ultimate Fighter,” “The South Jersey Strangler” Tim Williams made his return to the CFFC cage against Dervin Lopez. After Lopez played a game of hide-and-seek with him in the first, Williams finally found his target in the second, took him down, then got his back and secured a rear-naked choke, earning the tap at 1:16 in the 2nd.

At 155 pounds, Jordan Stiner needed just under four minutes to find the flush right cross that laid waste to Mike Medrano. The win came officially at 3:55 of the first for the Renzo Gracie fighter.

After almost 15 months away from the cage, middleweight “The Cowboy” Mike Wilcox made his return to the CFFC cage to take on Darren Costa and delivered perhaps the most emphatic finish of the night: Wilcox latched on the guillotine and Costa lifted him up tightening up the choke. Referee Liam Kerrigan was called into duty just 1:45 into the bout, as Costa crumbled unconscious to the mat.

The only heavyweight bout of the evening featured two CFFC vets in Lewis Rumsey and Joe Stripling. Rumsey remained active over the first two rounds scoring with kicks against the bigger Stripling to earn three 29-28 scores.

In his first bout as a mixed martial artist, former Hofstra wrestling standout Ryan Patrovich used his credentials to ground Allen Otto en route to three 30-27 scorecards. In his own highly-anticipated pro debut, Sean Brady kept on rolling against Paul Almquist, flurrying his way to stoppage in just 33 seconds. Ashure Elbanna also scored his first win as a professional, as the featherweight scored a submission win via guillotine choke at 4:23 of the second round over Jerome Isip.

A catchweight bout between Alfred Alo and Stephen Regman ended up going the way of Tiger Schulmann’s Regman after doctors stopped the bout at the end of the first round.

The first bout of the evening took all of 91 seconds as Micah Terrill caught Christian Leonard with a left-hand counter and followed up to finish.