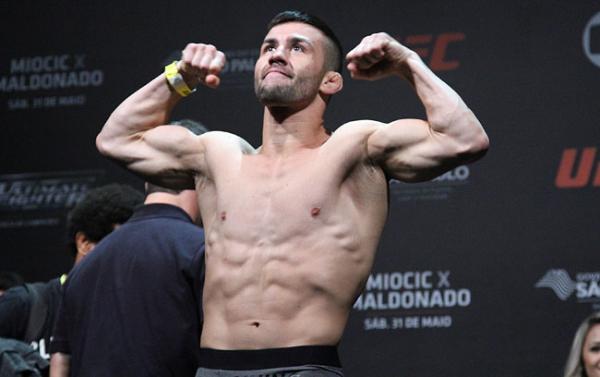 
Pedro Munhoz will meet Jimmie Rivera in a bantamweight tilt at UFC Fight Night “Belfort vs. Henderson 3” on Nov. 7.

The promotion’s Brazilian branch announced the bout on Wednesday. The UFC Fight Night event takes place at Geraldo Jose de Almeida State Gymnasium in Sao Paulo and is headlined by the third meeting between Vitor Belfort and Dan Henderson.

After dropping his debut to bantamweight title contender Raphael Assuncao at UFC 170, Munhoz has won his last two Octagon appearances. The Black House MMA product stopped Matt Hobar in the first round at “The Ultimate Fighter: Brazil 3” finale before choking out Jerrod Sanders in 39 seconds in his most recent outing this past October.

Rivera extended his winning streak to 16 with a first-round knockout of Marcus Brimage in his debut at UFC Fight Night “Bisping vs. Leites” on July 18. The 26-year-old has notched victories in Bellator, World Series of Fighting, Cage Fury Fighting Championships, Ring of Combat and King of the Cage during his streak.