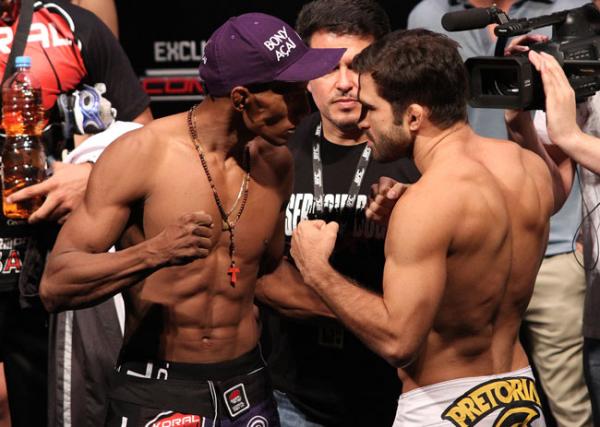 The biggest controversy of UFC on FX 7, which took place last Saturday in Sao Paulo, Brazi, occurred in the bout between Pedro Nobre and Iuri Alcantara. Referee Dan Miragliotta stopped the action after determining that Alcantara had landed a series of illegal blows to the back of Nobre’s head, and the fight was declared a no contest. In an interview with Sherdog.com, Nobre defended himself from accusations that he faked an injury to the head to avoid defeat.

Check out the full interview below.

You had to go to the hospital after the fight. How are you now?

I'm better; the doctors said I had a soft tissue injury, but nothing serious in the skull or brain. I have to wait to see how long the UFC medical suspension will be, but I'm fine.

What do you remember about the fight? Did you feel the blows to the neck?

I went to the hospital with a bad headache, and, in my mind, I had suffered a technical knockout. I was very sad for the defeat. When I was in the Octagon, [they] asked me what I felt, and I said I had a huge pain in the head, and I couldn't walk or open my eyes. At no time during the fight did I complain about blows to the neck because I was almost knocked out and did not know where the blows were coming. And nobody asked me if I could continue, they just asked what hurt. Then I thought I had lost it. Only at the hospital did they tell me that it had been ruled a no contest. It was a bad thing to have taken the victory from Iuri, but when I reviewed the fight, I saw that the blows really came on the neck. It is illegal, so the no contest was fair.

So if Iuri had been more careful he would have won?

Of course, I felt the blows when I turned back. I was almost knocked out already. If he did not land those blows to the neck, he would have achieved a fair victory.

The fans called you "quitter" after the fight, and you have been receiving a lot of criticism on the Internet. How do you react to all this?

As for the crowd, I did not understand why they called me quitter because, as I said, in my mind I was leaving to the hospital after losing by TKO. I saw the repercussions on the Internet, and I was sad. Everyone who has been following my career knows me. Everyone knows the character I have, but [some are saying] that I gave up the fight. Gee, brother, I was knocked out. The referee stopped it. The fight was over. I did not ask to stop, and they did not ask if I wanted to continue.

Did you see that [UFC President] Dana White posted on Twitter that you are a great actor?

I saw, I was upset, but he's the boss. He wants a show, there wasn't a show, and he can say whatever he wants. If he wants to mark this duel again, I accept.

Then will you ask the UFC for this fight against Iuri again?

I met Iuri in the hotel, and he apologized and said he did not intend to land illegal blows. And he really didn’t -- I know that was in the heat of battle. I told him that these things happen, and that if he wanted to do this fight again he could ask the UFC, because I asked too.

Speaking of the fight, is there some mistake you made that Yuri took in advantage?

The fight was good. I hit a blow on “Marajo” when he tried to land a takedown. Then I went to the single leg, and this was my mistake. I knew that Iuri defends single leg by attacking with the kimura, and he caught me. If I was to give up, I would have tapped there, but I didn't tap. I would have let it break. I spun and escaped the kimura, but I fell back in a bad position. [I] defended two rear-naked choke attempts, but Iuri seized [the opportunity].

Before the fight, you told me you would ask to fight in the flyweight division. After recent events, are you in good enough standing with the UFC to ask for anything?

I am UFC contracted and this fight had no result. If I have to fight again at bantamweight, with Iuri or another opponent, I will fight and then ask to go down. Let's wait and see what the UFC decides.

You lost for the second time in the eyes of Dana White, and you have suffered much criticism after fighting "Marajo." How do you see your situation in the UFC today?

I have extra motivation; I want to show my value. I took a fight on short notice, at a weight that was not mine, and what happened, happened. I could not show the UFC what I really am. I want to show in the next fight that they didn't make a mistake hiring me.