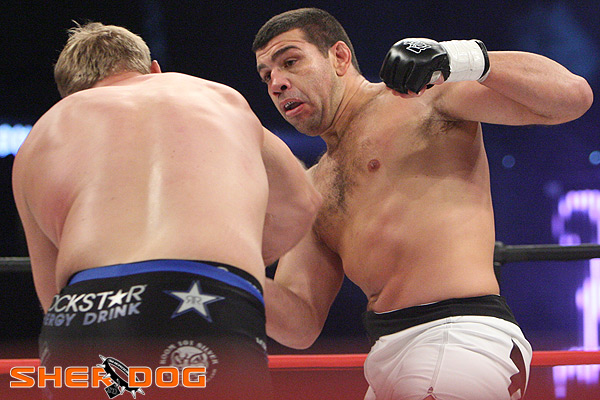 
Brazilian heavyweight Pedro Rizzo will end a two-year absence from MMA competition this fall when he takes on American “Ironman” Travis Fulton.

The matchup, first reported by Globo.com, is set to headline Face to Face 12, an event tentatively scheduled to take place Sept. 12 at Alvares Cabral Swimming and Rowing Club in Vitoria, Brazil.

Rizzo, 41, will compete in his home country for the first time since September 2009, when he earned a unanimous decision over Jeff Monson to launch a three-fight winning streak. “The Rock” subsequently dropped back-to-back fights, suffering a knockout against Fedor Emelianenko in 2012 before being outpointed by Satoshi Ishii in 2013. In November, the former UFC heavyweight title challenger opened his own gym, Rizzo RVT Fight and Fitness, in Rio de Janeiro.

Fulton, 38, is the sport’s most experienced competitor, having racked up a career record of 251-50-10 in organizations across the globe. Following his last high-profile bout -- a buzzer-beater knockout loss to Andrei Arlovski in 2011 -- Fulton returned to his home state of Iowa and ran off four straight wins. That streak ended in November, when Fulton traveled to Russia and was punched out by Alexei Kudin in 94 seconds.