Fifteen minutes were not enough to decide the showdown between former two-division champion B.J. Penn and perennial welterweight contender Jon Fitch on Sunday at the Acer Arena in Sydney, Australia.

The UFC 127 headliner ended in a disappointing but just majority draw after three highly competitive rounds. Two of the three cage-side judges ruled it a 28-28 deadlock. A third scored it 29-28 for Fitch, who dominated Penn with top control and heavy ground-and-pound in the third round.

“I thought [I deserved the win],” Fitch said. “I gave some positioning in the first two rounds, but I came back and did enough to at least win a split decision.”

Penn surprised the American Kickboxing Academy standout with his game planning. The gifted Hawaiian scored with takedowns in each of the first two rounds and secured back control on Fitch, threatening him with chokes from behind. Fitch defended successfully and turned into Penn’s guard on both occasions.

“My cardio was through the roof. It just threw me off. I didn’t train for B.J. shooting takedowns,” Fitch said. “I wasn’t expecting that at all. It took me until the second round to really find my groove.”

Fitch came out firing in the third, as he unleashed a crisp overhand right and transitioned immediately to a takedown inside the first 10 seconds. Penn fought back to his feet, only to be taken down again with 3:44 left in the fight. He never again returned to an upright position. From there, Fitch tore into Penn with elbows, punches and hammerfists from the top. It was the most decisive part of the 15-minute encounter between the two.

“I think I got some dominant positions in the first and second, but he kicked my butt in the third,” Penn said. “If I lost this fight, I wasn’t sure what I was going to do with my career, but since the gods were nice to me and gave me a draw, if he wants to do it again, I’ll do it again.”

Fitch -- who entered the Octagon with wins in 21 of his last 22 fights -- restated his desire to challenge for the welterweight title again, though he seemed resigned to the fact that a rematch with Penn might be forthcoming.

“I want the title more than anything, but at the end of the day, we don’t make the decisions,” Fitch said. “The guys in the suits do and the fans do. Whatever -- I’m here to fight. I’m here to fight the best. If my 13 wins in the UFC aren’t enough to put me in there for a title shot, then I’m willing to prove myself some more.”

The world-ranked Michael Bisping buried Jorge Rivera under a barrage of punches and knees, forcing a second-round stoppage in the co-main event. The blows put Rivera on one knee and left the referee no choice but to intervene 1:54 into round two.

“Jorge's camp talked a lot of s--t coming into this fight,” Bisping said. “I apologize for getting a little worked up there. I respect Jorge as an opponent. I didn’t understand it. I never said anything bad about him. I felt they were going a little below the belt.”

It appeared as though the match might end prematurely in the first round, when Bisping connected with an illegal knee to Rivera’s head. After several tense moments, the fight resumed. Bisping controlled Rivera with jabs and takedowns, minimizing the impact of the point deduction.

A straight right hand from Bisping marked the beginning of the end for Rivera in the second round. The Brit flurried on him against the cage, utilizing his hands and knees. Rivera covered up in an attempt to recuperate, but Bisping left him no room to breathe much less recover. A final combination drove Rivera to the canvas and brought a decisive end to their middleweight bout.

Bisping has won seven of his past nine fights, including three in a row.

“I worked really hard on [my conditioning],” he said. “I can’t understand why guys come in here and can’t fight hard for three rounds. I love my job. I’m just trying to achieve my goals.” 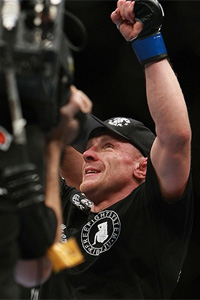 Dennis Siver file photo
Siver has won three in a row.
Russian-born German kickboxer Dennis Siver threw a monkey wrench into the lightweight division, as he upended the surging George Sotiropoulos by unanimous decision. The judges scored it 29-28, 30-28 and 30-27 for Siver, who has won seven times in his last eight appearances.

Siver set the tone with a pair of crackling left hooks in the opening period, both of which left Sotiropoulos on the seat of his pants. The Aussie survived, though he was clearly wobbled and weakened between rounds. Sotiropoulos sprang back in the second frame two with sharp straight power punches, jabs and kicks. However, the Brazilian jiu-jitsu black belt never managed to bring the fight to the ground, where his superior grappling skills would have come into play.

“We trained so hard for that, because we knew that George would try to put me on the ground,” Siver said. “That’s why we trained it every day, and it worked.”

Clearly frustrated, Sotiropoulos was forced to stand with a superior striker. In the third round, Siver worked kicks to the legs and head, put together powerful combinations and kept himself upright. The defeat, Sotiropoulos’ first in UFC competition, snapped the Aussie’s eight-fight winning streak.

“He was very strong, and he threw some heavy shots,” Sotiropoulos said. “I tried to work for the takedown, but he defended well. It was hard to take him down.”

Seasoned 62-fight veteran Brian Ebersole fought brilliantly in his first Octagon appearance, as he upset the resurgent Chris Lytle by unanimous decision in a welterweight showcase. All three judges scored it for the Australia-based American: 30-27, 29-28 and 29-28.

Ebersole featured a quirky standup attack and outstanding submission defense. Lytle landed heavy punches to the head and body, often one at a time, in the first round and threatened with a guillotine choke. Still, he never seemed to find himself in the match. Ebersole leveled him with a brutal knee against the cage in round two and tried to finish it with a tight brabo choke.

“I thought I was going to be able to sink that choke, but being up against the cage kind of made it hard,” Ebersole said. “He’s not some guy who loses his awareness. He’s a very tough guy, and he was there with me the whole time.”

Lytle faded in the third round, perhaps impacted by the after effects of the knee. He again turned to the guillotine choke, but Ebersole was never in danger. Ultimately, he freed his neck, postured inside Lytle’s guard and dropped a wicked elbow that opened a deep gash on the left side of the Indianapolis native’s forehead. With that, Ebersole punctuated the most significant win of his 11-year career.

“Overcome with emotion,” he said. “I brought a lot of emotion in here from the people in my life tonight.”

They barely broke a sweat.

Kyle Noke grounded fellow “The Ultimate Fighter” Season 11 cast member Chris Camozzi and coaxed a tapout with a rear-naked choke in a featured middleweight tilt. Camozzi submitted to the hold just 95 seconds into round one.

The two traded strikes for roughly a minute before Noke secured the takedown into full mount and dropped punches from the top. He took Camozzi’s back in a scramble, locked in the choke and finished it in a hurry. Noke, who once served as a bodyguard for the late Steve “The Crocodile Hunter” Irwin, has rattled off five consecutive victories, three of them in the UFC.

“I was expecting a standup war from Chris,” Noke said, “but when we went to the ground, I was happy to get the submission.”