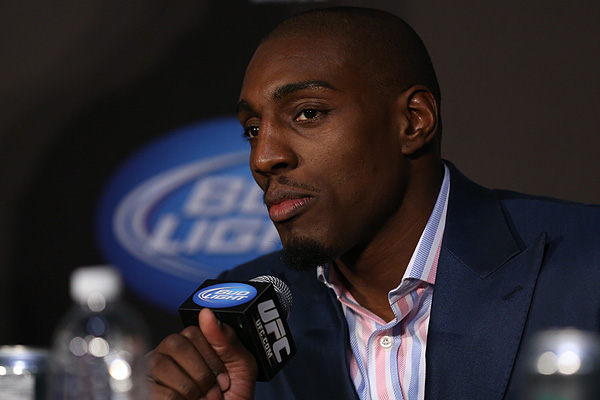 While it was not a popular decision with live audience at UFC 163, Phil Davis nevertheless believes his victory over Lyoto Machida was a just one.

“I think I definitely did enough. I trust the judges when I lose, so I gotta trust the judges when I win. They gave me the nod, so I have to say thanks,” Davis (Pictured, file photo) told Fox Sports after the victory. “Here’s the thing: this is his home country. I know it was a close fight. I was in there. I had fists grazing my head the whole time, but it’s one of those things where you’re so close to the action that you have no idea how it looks from the outside. A lot of times I’ll watch fights when I go home, and they’ll look completely different from my first-person perspective.”

Though Machida controlled the majority of the standup action during the 15-minute bout, Davis managed to score takedowns at the end of the first two frames, a fact which may have swayed the judges to deliver their 29-28 scores across the board. However, Davis came up empty on takedowns in the third frame, as Machida shucked off multiple attempts from the former NCAA Division I wrestling champion.

“I knew he was tough and could move great laterally. I watched his tape. I’ve seen the man before. He’s so quick back and forth -- it’s pretty impressive. And he’s also quick north and south, so I knew what I was up against,” said Davis. “He seriously got on my nerves with a couple of straight lefts, but I was in it the whole time. I didn’t get wobbled at all.”

Davis’ victory over the highly regarded Machida could place “Mr. Wonderful” close to a title shot, but the light heavyweight contender was quick to defer to UFC brass regarding his future plans.

“That’s not for me to decide,” said Davis. “[Machida] was the No. 1 contender. He’s been on top for a while and has been promised a title shot. I can’t say enough about how awesome the man is. A win over him, I don’t know where it puts me. That’s for the boss to decide.”