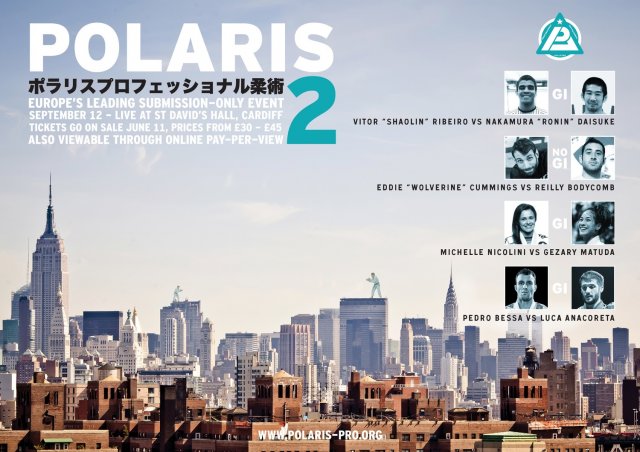 The Polaris Jiu-Jitsu Invitational, Europe’s premiere submission-only event, recently announced its second installment will be held on Sept. 12 in Wales.

The scheduled main event will be multiple-time world champion Vitor Ribeiro taking on Daisuke Nakamura. Their match rekindles the old rivalry between Brazil and Japan and will be a 15-minute submission-only gi match.

Ribeiro is a former champion in MMA for Cage Rage and Shooto and has also won several titles in BJJ and grappling tournaments. Ribeiro retired from MMA in 2013 after dropping four his last five fights.

Nakamura is a judo and Brazilian jiu jitsu black belt who has been one of the top BJJ competitors of Japan. He's won several All Japan championships in the black belt division.

Additionally, Eddie Cummings is slated to face off against Reilly Bodycomb in a 15-minute no-gi matchup. Cummings holds wins over top-tier grapplers Nathan Orchard and Denny Prokpo. Bodycomb has won several grappling tourneys and is unbeaten in MMA.

Also on the card will be a women’s battle between Michelle Nicolini and Gezary Matuda in a 15-minute gi match. Nicolini, a black belt under Robert Drysdale, is a seven-time BJJ champion who also sports an ADCC title on her resume. She competed on the first Polaris card, where she won via toehold over Angelica Galvao. Matuda is the reigning 2015 Pan Ams black belt champion and has captured several jiu-jitsu titles along the way.

Another matchup that was announced is Pedro Bessa versus Luca Anacoreta in a 15-minute gi match. Bessa is one of the most accomplished European grapplers in the sport, having won multiple world titles, most notably the Europeans and World Championships. Anacoreta, who hails from Italy, has also won several European grappling titles.

Polaris should be announcing several more matches for its second event in the coming weeks. Polaris 2 will be held inside St. David’s Hall in Cardiff. Tickets for the event go on sale June 11 with online pay-per-view details coming soon.