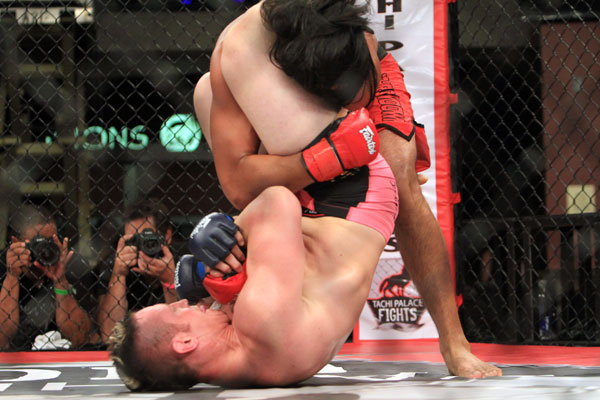 Poppies Martinez avoided Christos Giagos' subs and got one of his own at TPF 16. | Jeff Sherwood/Sherdog.com


LEMOORE, Calif., -- Though Tachi Palace Hotel and Casino played host to TPF 16 “The Return” on Thursday night, the most anticipated match of the evening was not contested, as Bernard Turner withdrew from his scheduled bout with former Bellator bantamweight champ Joe Soto due to a neck injury.

Following Turner’s late withdrawal, Tachi officials told Sherdog.com that Soto’s camp could not come to terms with replacement opponent Cory Van Bauer, resulting in the fight being scrapped altogether. Officials said Soto decided to concentrate on preparing for his upcoming fight with Bellator.

Poppies Martinez bested Christos Giagos in their lightweight championship fight. The two fighters engaged in an exciting back-and-forth ground battle that saw both men take with the upper hand at points. It was Giagos who grounded Martinez in round one, but the Thrive MMA representative reversed and began landing clean elbows from the top. Giagos then bucked free and locked in a rear-naked choke, but Martinez kept his chin tucked and reversed position to land more clean shots from the top.

Giagos tried to scramble free, but “The Tachi Kid” sunk a clean guillotine choke. Though Giagos tried to roll out of the hold, Martinez rolled with him, forcing him to tap in thrilling fashion at 4:27 of the first round.

Earlier, Art Arciniega and Marcello Cassero clashed over the vacant TPF featherweight title, with Arciniega capturing the belt via split decision. While Arciniega was the clear aggressor in the early rounds, Cassero proved to be a very elusive target, and most of “King Arthur’s” punches found nothing but air.

On the rare occasions when the bout hit the floor, the pair were fairly evenly matched and soon returned to their feet. Arciniega remained aggressive, but as the fight entered the later rounds it was Cassero who was landing the meaningful shots, leaving the Fresno fighter’s face marked and bloodied.

The fifth round proved to be the most entertaining, with Cassero landing good shots, and Arciniega still dancing and refusing to fade. In the end, the judges saw it 48-47, 46-49, and 48-47 for Arciniega, the new TPF featherweight champ.

The featherweight contest between Isaac DeJesus and Darren Crisp got off to a strange start, as Crisp dropped to the mat during a wild exchange against the fence. DeJesus swarmed, prompting referee David Shirley to wave the bout off just 85 seconds into the opening round. However, Crisp immediately complained that it was a groin shot that had hurt him, and after a brief conference in the cage, officials decided to let the fight continue. Crisp was given five minutes to recover.

When the action resumed, the fighters again engaged along the fence before DeJesus caught the Visalia fighter with a left-right combo that dropped him again. The Thrive Fitness fighter quickly followed him down and finished the fight with ground strikes just 2:20 into the contest.

Local prospect Cain Carrizosa dazzled the crowd with a thrilling stand-up beating of game opponent Cody Orrison. The Woodlake, Calif., native used solid takedown defense to keep the fight vertical while battering Orrison for 15 minutes. After the first round, the San Franciscan was bleeding from his nose and mouth, and Carrizosa opened a cut on his head with a knee from the clinch in the second. Orrison would not go away, however, as he rallied in the third with some clean punches that seemed to stun Carrizosa. Nevertheless, it was too little, too late, as Carrizosa captured the victory on all three scorecards as the crowd roared with approval.

Alexander Crispim and Sergio Quinones engaged in an entertaining featherweight tilt, though Quinones obviously held the edge on the feet, stunning Crispim several times with punches and knees. Even so, Crispim dominated on the mat, making the first round very hard to judge. In the end, it was Crispim’s ground game that made the difference, as he locked onto an arm and forced the Lemoore native to tap at 1:48 of round two.

Ricky Legere Jr. proved too much for Joey Cabezas. The middleweights were only on their feet briefly before Legere took it to the mat, where he was obviously superior. Cabezas tried to buck his opponent out of the mount, but Legere grabbed in arm in a scramble and Cabezas had to tap. The official time was 3:22 of the first round.

After the fight, Legere openly requested a title shot, and officials confirmed after the event that they plan to have Legere fight Nate Loughran for the welterweight title at their next event on Nov. 14.

Rolando Velasco cruised to a dominant victory over Alex Rojas in their bantamweight tilt. Velasco controlled the action both on the feet and on the mat before locking in a rear-naked choke for the finish at 2:51 of the third round.