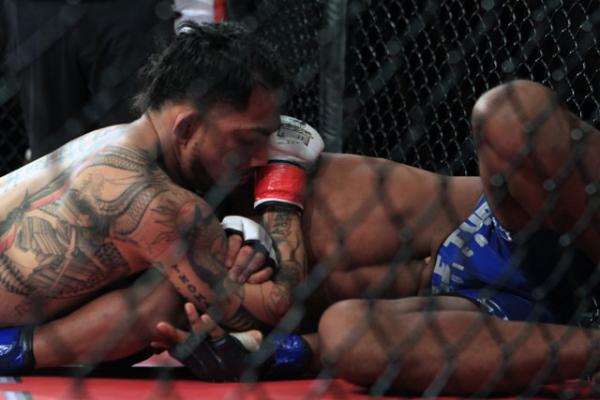 The reigning TPF lightweight titlist, Martinez submitted Chris Culley in 3:31 to win the 145-pound championship live on Sherdog.com from the Tachi Palace Hotel and Casino in Lemoore, Calif.

Martinez quickly closed the gap on his longer foe and took the fight to the floor, nearly passing to mount before Culley pushed him back into half guard. Though “The Urban Legend” was able to scramble to his knees, Martinez made him pay for his haste, locking up an anaconda choke and diving into the accompanying gator roll. Martinez gradually tightened his squeeze, walking his legs toward his opponent’s to lock in the hold and force the tap.

Following his victory, “The Tachi Kid” asked Bellator CEO Bjorn Rebney to give him a second chance with the Viacom-owned promotion.

“If it wasn’t for all [of my supporters] out here, I wouldn’t be who I am. I’m bringing both belts back to the [reservation], where they belong,” said Martinez. “Bjorn, you’re the boss. Give me a shot. I got two belts. Give me the opportunity, Bellator.”

In the evening’s co-headliner, former Bellator featherweight champion Joe Soto captured the TPF bantamweight title, despite a puzzling end to the championship bout. 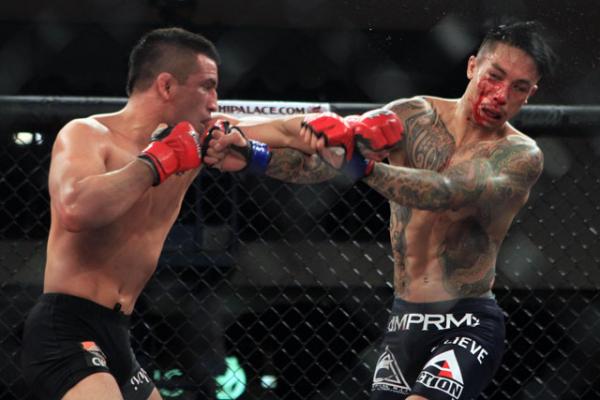 Photo: J. Sherwood/Sherdog.com
Soto outslugged Labiano to take TPF gold.
Jeremiah Labiano made Soto work for a takedown in the opening frame, stinging the 26-year-old with hammerfists while defending his single-leg try. Soto managed to dump him, however, and spent the second half of the round in top position, where he worked effectively with ground-and-pound.

The second stanza would see Soto pick himself up off the canvas after suffering a flash knockdown to score a double-leg slam, but it was during the third frame that Soto lived up to his “One Bad Mofo” nickname, as the 15-fight pro began to pick apart “The Kid” with hard jabs and left hooks.

With his bloodied opponent on wobbly legs, Soto dropped him with a cross-uppercut combination and then passed to mount. From there, the Bellator vet pounded away with elbows and took Labiano’s back, sinking what looked to be a deep rear-naked choke. Before Labiano could tap, however, the horn suddenly sounded with 44 seconds remaining in the round on the instruction of the cageside doctor, resulting in Soto winning via technical knockout.

“He had me almost out a couple of times. That’s a big-ass kid. He should change his [nickname] to ‘The Man,’” Soto said after his championship win. “I think I should get the call. I’ve been finishing people. Give me a shot in the UFC. Come on. It’s my dream.”

Middleweight Randall Wallace picked up his fourth consecutive victory at the expense of Joey Cabezas, whose botched belly-to-back suplex led to Wallace mounting him early in round one. Though Cabezas would reverse the position, Wallace soon returned the favor, regaining his mount and then cinching a fight-ending triangle choke at the 4:33 mark of the opening frame. 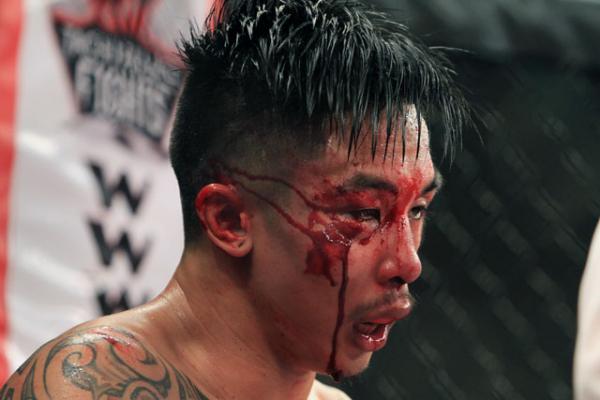 Photo: J. Sherwood/Sherdog.com
Soto drew blood and smashed Labiano's face.
Cain Carrizosa wasted no time in dispatching fellow lightweight Chris Quitiquit, who was knocked cold by a stiff right straight just 30 seconds into their bout. Though Quitiquit regained consciousness following the brutal stoppage, the 155-pounder was nevertheless removed from the cage via stretcher.

Heavyweight Jack May also put in a short night of work, as the unbeaten CSW product floored Carl Seumanutafa with a lead-leg high kick and then pounded him out with hammerfists to secure the technical knockout in just less than three minutes.

Luis Gonzalez scored a vicious knockout over Damen Wood in their flyweight contest, dropping “The Demon” with a wicked overhand right and then pouncing with ground-and-pound to seal the deal in just 1:39. Meanwhile, Andrew Martinez was dominant in his light heavyweight appearance, dropping William Johnson with a right hand counter and then forcing the submission with a nasty neck crank at the 2:13 mark of the first round.

Hector Sandoval edged Benny Vinson after 15 minutes of virtually nonstop flyweight action, taking a unanimous decision from the Oregonian to extend his current winning streak to seven fights. Also at flyweight, Alex Perez outclassed Eloy Garza en route to a unanimous decision win, hurting Garza with low kicks early before bloodying his foe with elbows from the guard in a one-sided three-rounder. Earlier, Thomas Vasquez submitted Alex Rojas in impressive fashion, blasting his fellow bantamweight with elbows from the rear crucifix before taking full back control, trapping an arm and finishing with a rear-naked choke 4:23 into round one.