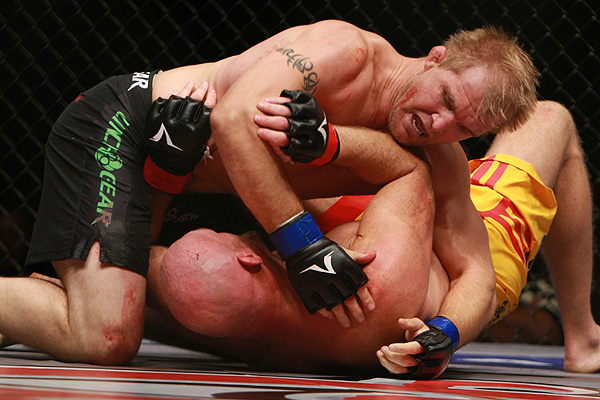 The veterans -- both in need of good showings for the higher promotions -- clinched early into the first round. Prangley landed head and body knees, as well as a short right hook to soften Jardine before they scrambled onto the canvas. Jardine locked in a tight armbar, but the South African Olympic wrestling alternate managed to free himself. In side control, Prangley tried to target elbows on a cut over Jardine’s left eye. Jardine, who suffered two knockouts in his last three outings before the UFC released him, made it to his feet and landed a flush right to get back in the game.

The second round played out on its feet, as both began to show signs of fatigue. Halfway through, Prangley dropped Jardine with a right, smelled blood and went in for the kill. However, Jardine was not ready to call it quits and returned to his feet.

Jardine began to work in his kicks in the final round, as the crowd chanted for “The Ultimate Fighter 2” veteran to rise to the occasion. Jardine connected with a stinging right in the final minute and then another, but as he has proved in the past, the American Kickboxing Academy-based Prangley was just too durable a fighter to finish.

For the 34-year-old Jardine, exiting the cage with his fifth defeat in a row will give him much to think about. 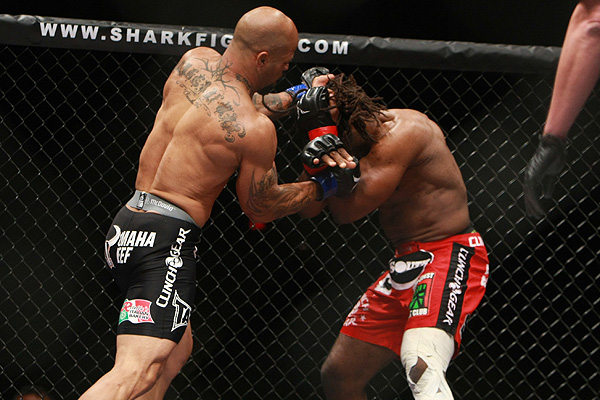 Dave Mandel/Sherdog.com
Alexander (left) vs. Sokoudjou.
In a dramatic come-from-behind campaign, Houston Alexander survived a punishing first round to turn the tables and stop Rameau Thierry Sokoudjou with brutal punches 1:31 into the second round.

Sokoudjou, a 2001 U.S. Open judo champion, dropped Alexander with a stiff left two minutes into a furiously paced first round and battered the Nebraska father of six with follow-up shots as Alexander dangled from his leg fighting for a takedown. From there, Houston had a problem.

Sokuoudjou stayed on a wobbly Alexander as he tried to get his feet back underneath him, almost floored him again and then took him down into side control. In a desperate push, Alexander managed a reversal and landed a handful of labored single shots in the last 30 seconds.

The second round could not have gone more differently. The 38-year-old Alexander came out of his corner a man on a mission, pumping his jab and crumpling Sokoudjou into a heap on the fence. Referee Steve Armstrong let Alexander unleash compounding shots one after the other as the Cameroon native sat there helpless. Armstrong also missed Sokoudjou tapping out on Alexander’s leg in a desperate cry for mercy before he finally reached in to halt the massacre. It took Sokoudjou, flagged by medical staff, a few minutes to rise from the canvas. 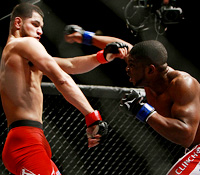 Daley, who was exiled from the UFC after landing a post-fight punch on Josh Koscheck in May, kept Masvidal on his heels for much of the first round with jabs, straights and a rare Capoeira-style body kick. Masvidal shot for his first takedown attempt with two-and-a-half minutes left on the clock. He managed the Team Rough House fighter to his back a minute later, but Daley averted damage by sucking his American Top Team opponent in close until he could make it to his feet.

Masvidal found the takedown quicker in the second round and then scored another shortly after Daley wall-walked to his feet. The takedowns did their job, as they slowed down the light-footed Daley and made him susceptible to a third grounding that earned Masvidal the second round on two scorecards.

The crowd’s hope for a crushing knockout from Daley began to fade as Masvidal started the final round with crisp jab before grounding Daley again with a single-leg takedown. Daley’s eyes often rose to the fight clock, as he head hunted the finish expected of him. He got close with two last-minute flurries on a grounded Masvidal. However, in the end, the only heightened drama the 27-year-old Daley brought to Texas was his inability to make weight the day before. 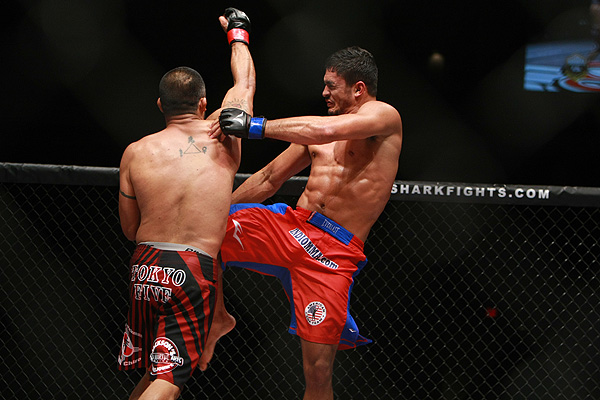 For his second straight appearance, Villasenor found himself exactly where he did not want to be -- neutralized on his back, fending off the threat of a head-and-arm choke and other submission attempts from the Brazilian jiu-jitsu black belt. The Greg Jackson-trained fighter escaped to his feet with 35 seconds remaining on the first-round clock but could only muster his own takedown on Villefort’s poorly executed shot.

In the second round, Villefort connected with a right hook that sent Villasenor reeling backwards and lit a fire under the pair once the New Mexico striker rose. Both men committed to a heated exchange, which the Brazilian followed with a takedown, but the action stalled there.

Villasenor poured on lefts and rights in the final round, but the American Top Team-based Villefort more than held his own on defense and returned fire. Villasenor then prompted the battle to the mat and held top position for a spell until Villefort maneuvered to back control and briefly to mount, cinching his third victory in a row. 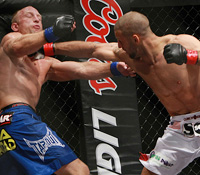 Dave Mandel/Sherdog.com
Saffiedine (right) vs. Larson.
Tarec Saffiedine outstruck UFC and World Extreme Cagefighting veteran Brock Larson for a unanimous decision victory -- 30-27 on all cards -- in their welterweight bout. The Belgium-born sharpshooter, on loan from Strikeforce, continued to unveil an impressive stand-up arsenal, as well as quick footwork and head movement that kept him out of harm’s way.

After a minute-long feeling-out period, Larson shot out of the gate with punches and was dropped by a side-stepping Saffiedine’s first strike. It was a sign of what was to come.

Larson later opted for a single-leg takedown attempt, but he could not fight Saffidiene’s superior balance.

The Minnesota wrestler switched to a leglock attempt, then tried a kimura when Saffiedine advanced into his half guard.

On his feet, Larson landed a whopping hook, only to receive an even harder one from his opponent. As Saffidiene’s punches began to find their home more frequently in the second and third rounds, Larson changed tactics and tried to stall the Team Quest Temecula fighter on the fence.

In the final moments, Saffiedine gained top position when a scramble spilled to the canvas and peppered Larson with shots to finish strong for his third consecutive victory.

In the night’s only championship bout, Ronnie Mann eked out a split decision against Douglas Evans in his second featherweight title defense, with 47-48, 48-47 and 48-47 scores.

U.K. prospect Mann scored throughout a competitive five rounds with combinations, low kicks and even a flying knee, while Evans countered with takedowns at key moments to break up the Brit’s rhythm.

Evans kept the pressure on his rapid-fire opponent into the final round and landed a clean takedown at the closing bell, but it was not enough to deny the quickly improving 23-year-old Mann his first victory of 2010 -- one that also delivered him a championship.