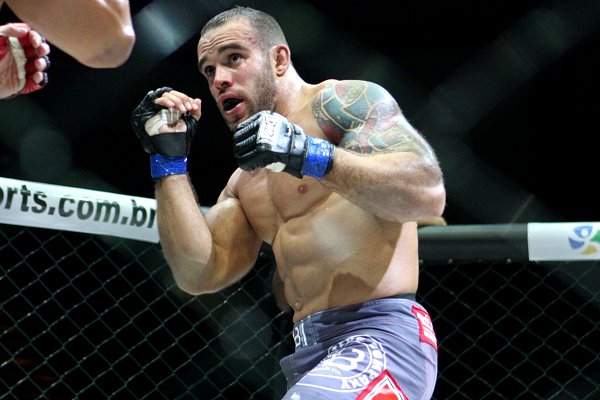 
Wednesday afternoon, it was the UFC press conference in Rio de Janeiro that grabbed the attention of the MMA world. But the night belonged to the state of Bahia, as foremost local promotion Win Fight & Entertainment returned to the Fiesta Bahia Hotel in Salvador for WFE 8 “Platinum,” where middleweight champion Bruno “Carioca” Santos defeated Pride veteran Daniel Acacio over five rounds to retain his title and earn his biggest win to date.

After a brief period of study, the unbeaten “Carioca” showed great evolution in his striking, connecting with a series of left hooks that wobbled Acacio. The Baiano hotly pursued stoppage as the opening round ended, continuing to attack Acacio until the bell.

The second round saw more Santos dominance, as the diminutive powerhouse got an early takedown and punished Acacio on top for the three minutes. However, the veteran was able to work back to his feet and momentarily turned the tables, landing a violent cross straight on the jaw that put Santos on the mat. Acacio rushed Santos with punches, but referee Carlos Barreto astutely opted not to step in, as “Carioca” regained his wits, and control of the fight.

After surviving the second-round scare, “Carioca” came back determined to wrestle his way to a victory. Both fighters looked gassed, as the pace slowed considerably, but Santos was able to use his superior strength and wrestling to pin Acacio to the fence. Santos finished by scoring repeated takedowns en route to earning the unanimous decision, moving his record to 8-0.

“Bahia’s culture is formed by its history, and I’m going to be a part of that history someday. I’m going to be there eventually,” a teary-eyed Santos told his hometown crowd after the bout.

“When I started fighting, [Acacio] was already a champion. It was an honor for me to fight him,” he added.

It was a less successful night for Chinzo Machida, brother of former UFC light heavyweight champion Lyoto Machida, as the elder sibling returned from a four-and-a-half-year hiatus to drop a unanimous decision to local Leonardo Laiola.

Laiola refused to give Machida opportunities to counter attack, forcing the Belem native to press forward. Laiola capitalized, knocking Machida down with a left hook and eventually taking his back, where Laiola sunk in a deep rear-naked choke from which Machida was saved by the bell.

The next two rounds followed the same pattern, as Machida walked forward but landed little offense, while Laiola was able to press Machida into the cage and land clean punches. In the end, all three judges scored the fight in favor of Laiola.

“It was a close fight. He’s a very tough guy. In the end, I just think I was a little bit better than him tonight,” proclaimed an ecstatic Laiola.

In the first round, Rodrigues got the worst of the exchanges on the feet and didn’t present much offense. However, “Jorjao” turned the tide midway through the second round, getting Barbosa to the ground and pummeling him thoroughly. At the round’s conclusion, “Parrudo” looked completely spent and complained of rib pains, and didn’t come out for the third frame.

In a bizarre happening, hulking heavyweight Geronimo “Mondragon” dos Santos’ quit on his stool for no apparent reason after the first round of his bout with Edinaldo Oliveira. “Mondragon” spent virtually the whole first round on top of Oliveira and seemed to absorb no damage. After the opening frame, dos Santos retired from the fight in his corner without any further explanation.

Rony “Jason” Lima put on a beautiful display of grappling, quickly dispatching Jurandir Sardinha in a featherweight contest. “Jason” connected early with a head kick, prompting Sardinha to shoot for a takedown. However, on the ground, Lima quickly took mount and locked up a topside triangle, reminiscent of Mark Bocek’s highlight reel submission against Dustin Hazelett at UFC 124 last weekend. Lima earned the tap just 75 seconds into the first round.

Marcio “Gracinha” Cesar submitted Paulo Roberto at 2:19 of the first round. Cesar, a training partner of UFC light heavyweight champion Mauricio “Shogun” Rua, got Roberto to the ground and smashed him with vicious ground-and-pound. Eventually, the Curitiba native was able to get a hold of Roberto’s neck and finish the fight with a guillotine choke.

In the first fight of the evening, Perceu Friza stopped Guilherme Medeiros. Medeiros couldn’t answer the third-round bell after sustaining a broken rib, courtesy of a Friza knee.