ATLANTIC CITY, N.J. -- Chris Weidman was able to remain undefeated with a first round TKO victory over previously undefeated Uriah Hall at Ring of Combat 31 Friday night at the Tropicana Hotel and Casino.

While Hall appeared to be conscious of Weidman’s wrestling, he didn’t seem prepared for his striking. In the opening seconds of the first round, Weidman used punches to set up his takedowns, but the Bellator veteran was able to negate the first two. When Weidman did eventually get the takedown on the third attempt, Hall was able to kick out of the bottom to escape any damage. 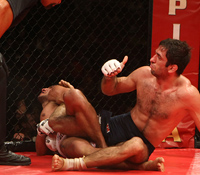 K. Mills/Sherdog.com
Malyutin (right) vs. Azeredo.
Shortly after, the four-time collegiate All-American dropped Hall with a left hand, sending him to the canvas. Weidman pounced on his prey and those in attendance counted the unanswered blows aloud until referee Dan Miragliotta stepped in to halt the middleweight title bout at 3:06 of round one.

In the other title bouts, Mikhail Malyutin outpointed Pride veteran Luiz Azeredo for the WKA lightweight title and Louis Gaudinot of Tiger Schulmann’s MMA captured the vacant ROC 125-pound strap with a first round submission (guillotine) of Jessie Riggleman at the 4:43 mark.