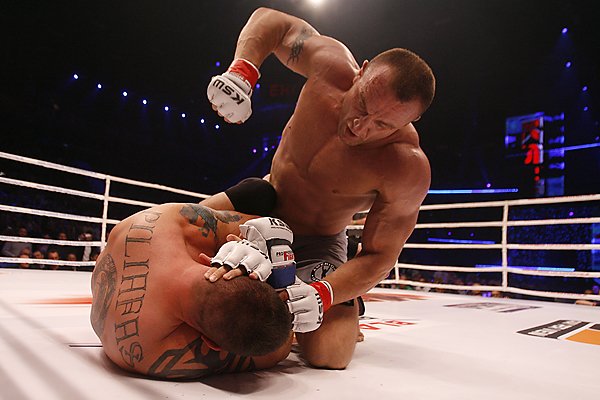 Mariusz Pudzianowski picked up his fifth career victory as a mixed martial artist on Saturday night, when the five-time World's Strongest Man stopped Christos Piliafas in the KSW 20 headliner.

“Pudzian” appeared in charge from the moment the bell rang at the Ergo Arena in Gdansk, Poland, as the hulking heavyweight scored with a double-leg takedown early and pounded away at the American's ribs from guard. Following a referee standup, the massive Pole again took the fight to the floor, this time landing in half-guard, where he would eventually finish the fight by posturing up and raining down dozens of unanswered punches that resulted in a technical knockout victory for the former strongman.

In the night's co-main event, Jan Blachowicz successfully defended his KSW light heavyweight title against UFC veteran Houston Alexander. Though both men looked tentative to start, Blachowicz quickly turned up the heat with a takedown, passing to mount before dropping bombs on his prone foe. Blachowicz attempted to finish the fight with an armbar to close out round one, but Alexander would not relent before the bell.

Round two produced a drop-off in action, though Blachowicz threatened with a triangle choke as the round expired following an Alexander ankle pick. The bout's final frame then saw the KSW champ snatch a deep kimura after hitting the deck courtesy of a low outside leg kick from the Nebraskan. Though Alexander managed to power out of the hold and escape to his feet, Blachowicz would finish the fight with a takedown, applying a body triangle to seal his unanimous decision win.

After nearly three years away from MMA competition, Rodney Glunder returned to the ring on one day's notice to face Marcin Rozalski, falling by unanimous decision to the Polish heavyweight. Stepping in for an injured Jerome Le Banner, Glunder was unable to produce much offense in the bout, with the exception of a sustained stream of knees landed against the ropes early in round one.

Rozalski responded by hitting a trip and landing in mount, a maneuver he would repeat in the second stanza, though Glunder would this time would hold him tightly in half-guard. “Rozal” scored knockdowns to begin and end the second frame, though Glunder tried valiantly to stay in the fight by scoring a takedown to close out round three. The move proved too little too late, however, as Rozalski was awarded the unanimous nod.

Polish heavyweight Karol Bedorf proved too much for American veteran Karl Knothe, as the crowd favorite used his size and athleticism to dominate “The Original Son of Punishment” for much of their three-round bout. Though undersized and outgunned, Knothe absorbed everything “Coco” threw his way, including a brutal barrage of knees to the head and body in the second round. Knothe even scored a takedown and captured Bedorf's back early in round three, though the Pole would soon escape the position and hit a takedown of his own to ride out the remainder of the contest from top position en route to earning a unanimous verdict from the judges.

Countrymen Borys Mankowski and Rafal Moks both put forth excellent efforts in their welterweight scrap, but it was Mankowski who took home a split decision from the judges. Just 22, Mankowski managed to grab an edge in the second frame after escaping a tight guillotine to end round one, cracking Moks with straight punches before landing a spinning back fist and then a jumping knee. Round three would bring more of the same, as Mankowski smartly kept the former M-1 Global middleweight champion at the end of his punching range, despite Moks' considerable efforts to close the distance and launch his own offense. Though game till the end, “Kulturysta” would be unable to prevent Mankowski from walking away with the approval of two of the three ringside judges.

A heavyweight contest between pro debutant Jacek Wisniewski and Kamil Walus proved a wild affair from the get-go, as both big men launched haymakers at will, though very few shots actually landed cleanly until Walus found a home for a looping right hook above his opponent's ear late in the first round. Wisniewski stumbled to the canvas, and Walus granted him no quarter, earning the ground-and-pound stoppage with just under one minute remaining in the opening frame.

In the evening's first contest, Polish lightweight prospect Anzor Azhiev earned a unanimous decision over Scottish veteran Paul Reed. The 21-year-old consistently scored takedowns against his more experienced opponent and punished him with ground-and-pound, taking Reed's back to end round two and then dropping the Scot with a head kick to start the third. To Reed's credit, he managed to weather the Pole's relentless offense in the final frame, surviving to hear the final bell.