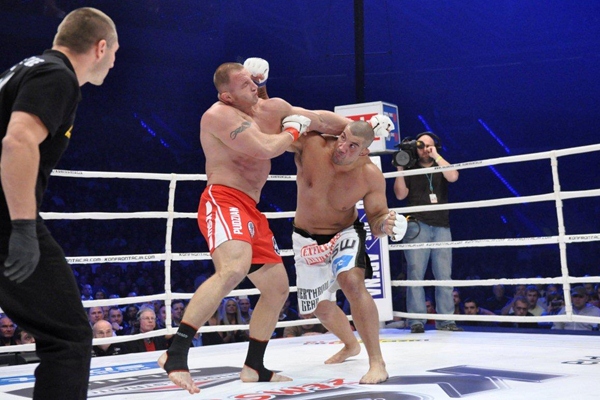 
Saturday’s KSW 17 bout between Mariusz Pudzianowski and James Thompson has been declared a no-contest, the Polish promotion announced in a release on Monday.

Pudzianowski was originally awarded a controversial majority decision in the two-round heavyweight bout at the Atlas Arena in Lodz, Poland. It was later determined that a miscommunication between one of the judges and the bout’s referee resulted in the decision being awarded incorrectly to Pudzianowski when it should have been ruled a draw.

On the official scorecards, judge Piotr Baginski scored the bout 20-19 in favor of Thompson; Robert Lysiak had it 20-19 Pudzianowski and Leszek Pawlegas scored it 19-19. According to the KSW release Baginski mistakenly conveyed to the referee that his scorecard favored Pudzianowski instead of Thompson. Under KSW rules, a stalemate after two five-minute rounds requires a three-minute overtime frame. Since that didn’t happen, KSW owners and officials agreed to declare the fight a no-contest.

“KSW Federation would like to apologize to both fighters, as well as MMA fans all over the world, for failing their trust and promises that KSW officials will do everything in their powers to eliminate such procedural errors in the future,” the statement read. “First efforts to improve the communication between the judges and the referees during KSW events will be made this week.”

Thompson and Pudzianowski first met at KSW 16 in May, where the English “Colossus” submitted the former World’s Strongest Man with an arm-triangle choke in the second round.